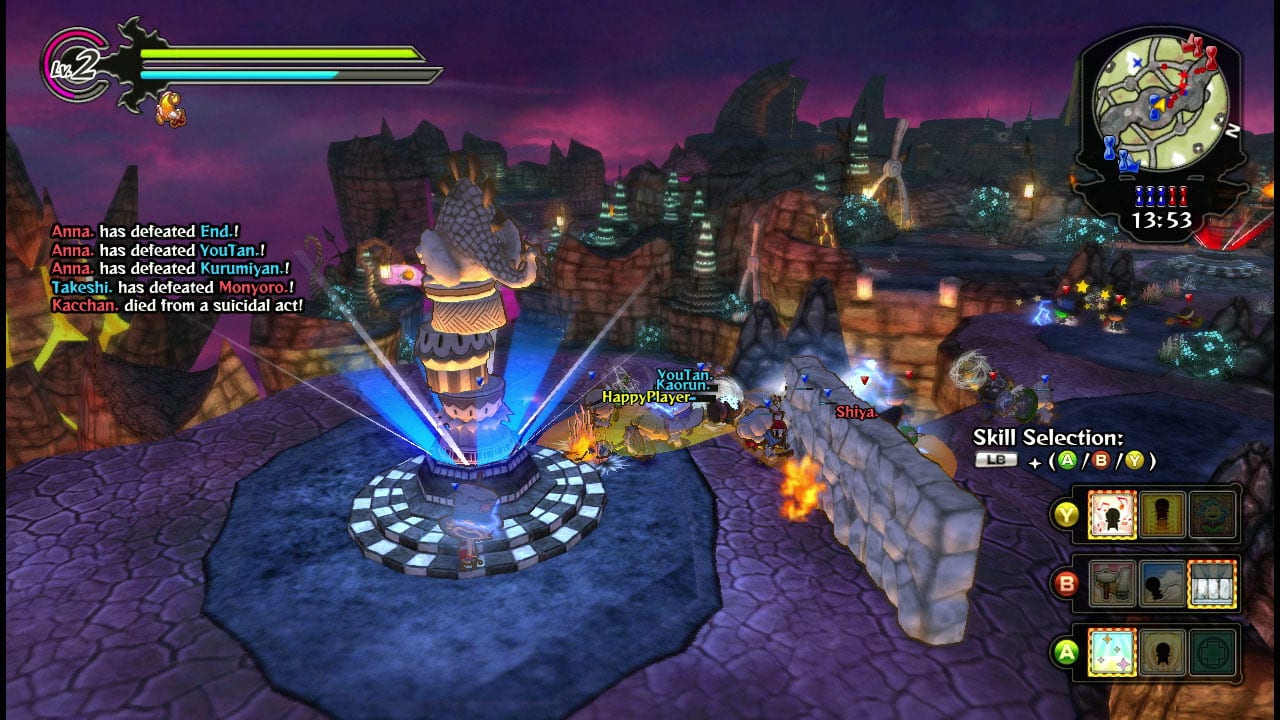 Consoles aren’t typically the first place you’ll go to when searching for free-to-play games as that model seems to have made a nice niche for itself on PCs. It may come as a surprise, then, to see one such game finally make its way onto Microsoft’s Xbox 360. Happy Wars does a good job of setting the stage for other F2P console games, but because it is the first one, things can only get better.

As its name implies, Happy Wars is a lighthearted game about two teams of 15 players battling each other for supremacy. Loosely modeled after massive online battle arena (MOBA) titles, the goal of each match is to destroy the other side’s defense towers while building your own in their place. Of course, you’ll be faced a barrage of magic attacks, battering rams, and turrets from the other side, so winning takes teamwork and a bit of strategy.

As fun as matches sound, the process of finding one isn’t always as easy as you’d hope, especially when the game can take upwards of two minutes to fully place players in a game before deciding to add AI-controlled bots to fill in the empty spaces. You can order these bots around with limited commands during battle, and while these bots do seem to do their job right, the game doesn’t always distribute them accordingly meaning teams might be overpowered by the sheer force of actual humans.

Once matches start, however, the game’s impressive qualities begin to shine through. At the start of a match and each time you get killed, you can choose from one of three classes of characters including the Warrior, Mage, and Cleric. Warriors excel at melee attacks while Mages rely on long-ranged spells and buffs. Clerics, on the other hand, are more resourceful and can not only heal but can also build structures like ladders and catapults useful for seizing enemy territory. There’s plenty of variety when it comes to leveling up your characters and special skills can also be assigned that complement each class’s offensive strategies. 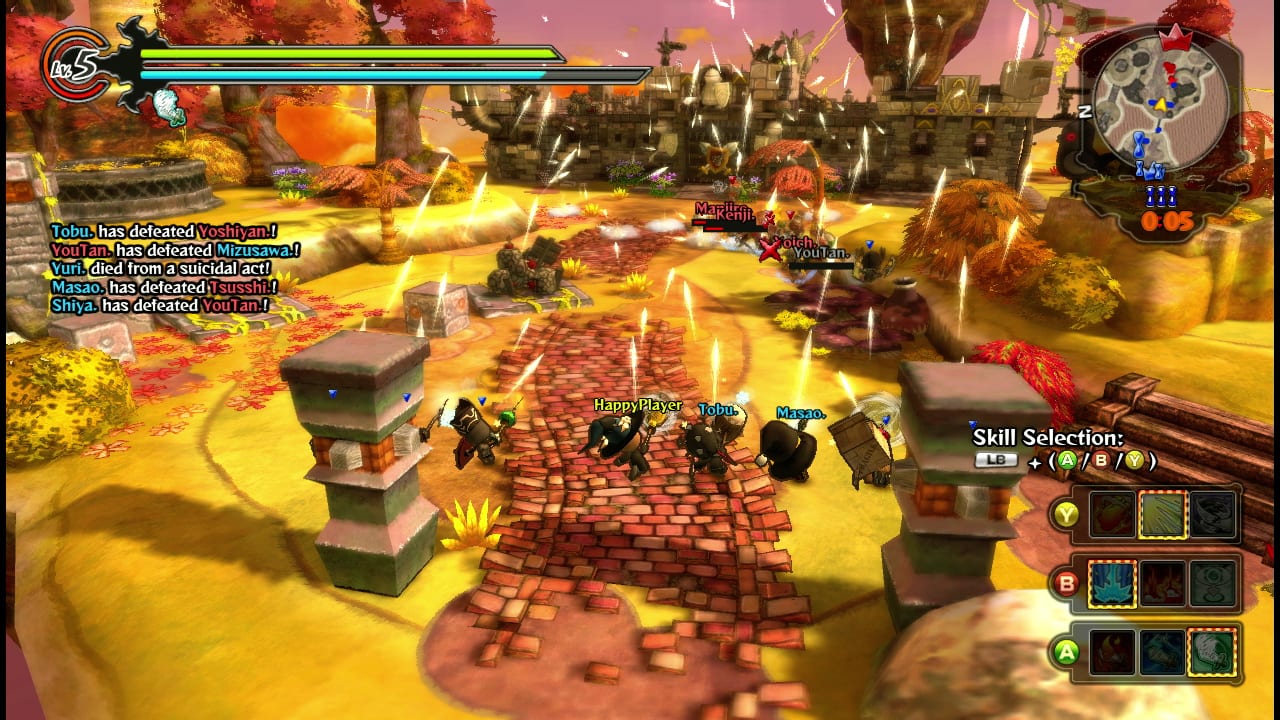 Because battles can consist of nearly 30 players duking it out all at once, things get very chaotic, but not always for the right reasons. While it’s a great feeling seeing a horde of troops surrounding a tower in an attempt to destroy or protect it, it’s hard to revel in the excitement when you can barely keep track of your character or your teammates. Player names appear over each character, but the words are so small and names get so jumbled when multiple players are close together that it makes it hard to keep track of where you are and whom you’re hitting.

Aside from experience points, players accumulate Happy Stars for each enemy defeated or from random treasure chests during battle that act as one type of currency. These can be spent to acquire better armor, weapons, and buffs for your characters, but the catch is not having direct control over what you’re spending it on. Happy Stars only let you play a roulette mini-game to get new items, so if you want to do some actual shopping, you’ll need to cash out some Microsoft Points for better in-game dollars called Happy Tickets. Like all F2P games, you don’t need to spend any actual money on Happy Wars to fully enjoy it, but doing so definitely gives you an edge in battle.

Happy Wars also includes a single-player mode that follows along the same lines as its online matches, but has you leading an army of computer-controlled soldiers instead. Campaigns are only available for you depending on your character’s level, so in order to move forward with the story, which involves rescuing princesses, you’ll need to gain experience online.

At the end of the day, playing it alone or with 29 other people will start to feel old. You’ll be doing the same thing after a while and the only incentive will be in leveling up your character or saving up money to pay for upgrades. Unless you play with a team of players that actually works and strategizes attacks together, most matches will just consist of running around and button-mashing. For a game that can only profit from in-game purchases, the lack of variety may hurt it from winning over an audience willing to invest time and money in it.

As the first one of its kind, Happy Wars shows that F2P games are totally possible on consoles. The game’s charming personality and accessible combat features do a great job at catching your attention, but its lack of depth and redundant gameplay might have a hard time keeping you interested after a few dozen matches. It won’t cost you anything to play it, so we definitely recommend giving it a try. Though, let’s just hope the game’s audience still cares about it a few months down the road.