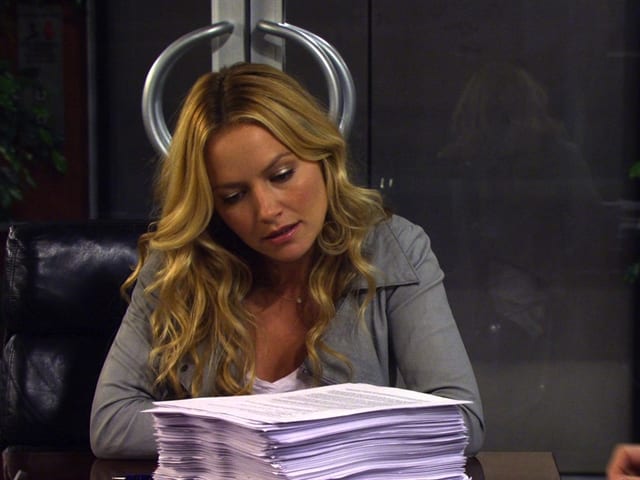 “The Pre-Nup” was an excellent follow-up to last week’s episode and out-shined the season premiere in both comedy and story-telling. For some reason, the jokes were funnier this time around, and this episode took us one step closer to reaching the fabled “little ways down the road” that we’ve been given frequent glimpses of lately. Plus, co-creator Craig Thomas promised there would be no more “swerves” away from Ted meeting the mother and Barney marrying Robin, which makes any progress toward those big events much more enjoyable. As a whole, “The Pre-Nup” was just as funny as it was exciting to get closer to the storybook ending that fans have been eagerly awaiting for seven seasons.

In an amusing method of fast-tracking Future-Ted’s recounting of the story to present day, he tells his kids that summer of 2012 was the summer of love, and therefore no good stories happened.  He goes on to foreshadow that the fall of 2012 would later be remembered as the Autumn of Breakups. The source of the turmoil all began when a work colleague of Barney’s (good old Artillery Arthur) advises him to get a pre-nup before marrying Quinn.  In a comical attempt to convince Barney, Arthur explains how his ex-wife Darlene took everything (even his kidney!) and left him with his crappy kids. Barney couldn’t agree more: kids are just awful!

Quinn meets Barney at the office for lunch and walks into an ambush—he and Arthur have concocted a thousand-plus-page pre-nup for her to sign.  The document includes ridiculous terms such as Quinn’s parents being allowed to visit as long as they are in urns, Quinn having to pay a $2,000 fine for every pound she gains at each scheduled “weigh-in,” and a minimum amount of sex positions that she has to invent every month. Quinn assures Barney that the pre-nup is insane and goes to Lily, Victoria and Robin for consolation. Likewise, Barney asks the guys about it, and they all agree with Quinn… at first.

The pre-nup scene was the perfect example of how Barney can still be just as amusing as past seasons without falling back on his man-whore lifestyle. Sticking him with one woman doesn’t change his personality at all—he’s still just as crazy, sexual, and bro-ish as ever. It took them multiple seasons, but it seems like the writers are finally getting the hang of writing Barney’s character as a man in serious relationships. Here here for character evolution!  It was always a concern that Barney could remain statically single for the duration of the show, and it’s comforting to see that he’s not only moving on, but that he’s just as hilarious as ever.

When Barney tells the guys about the pre-nup, he asks them if they’ve ever wanted to change something about their significant other’s habits.  They all insist that they’re perfectly content.  That night however, the men confront their ladies about certain things they’d like to change about them, and Future Ted reveals that by the next day, one of the four couples would break up.  Lily and Marshall disagree about how roughly Marshall handles baby Marvin (Lily humorously recounts a tale of Marshall violently throwing Marvin up to the ceiling when they got home from the hospital).  Robin and Nick fight about how Robin gets distracted by the TV when they start to have sex (she later admits that she gets turned on by watching herself do the news).  Ted and Victoria bicker about how Ted offered her ex-fiance, Klaus, a place to stay until he got back on his feet, then told him to get out without asking her about it.  And finally, Barney and Quinn continue to argue over the pre-nup.

As usual, Lily and Marshall’s altercation was by far the funniest.  Some of the best jokes in “How I Met Your Mother” come from moments of exaggerated reality, such as Barney’s pencil miracle (apologies for poor quality video) and Barney’s ultra-ridiculous video resume.  “The Pre-Nup” didn’t disappoint on this account, as Lily recounts Marshall throwing baby Marvin up to the ceiling of their apartment, and Marshall recounts his dad handling him like a football when he was a baby (kids, go deep!).  Another frequent source of comedy is Marshall’s man-child tendencies (which is why he’s the best character on the show), and in this latest episode he indignantly defends his desire to hunt the Sasquatch with his cryptozoologist heroes.  The bottom line is that without Lily and Marshall, “How I Met Your Mother” wouldn’t be half as funny.

Back at MacLaren’s, Quinn tells the other ladies that she has an idea to fight Barney’s pre-nup.  She goes to Barney’s office and confronts him with her own pre-nup, which has equally ridiculous terms.  Barney must wear a “shock ring” around Quinn’s attractive friends, is allowed to visit the Playboy mansion as long as he is in an urn, and must pay a fine any time he can’t get it up. Quinn brings in the other girls as backup, and likewise Barney brings in the guys.  They all begin to fight simultaneously, but Arthur interrupts and makes them realize that they’re arguing about silly things in order to cover up their deeper feelings. Once the gang realizes this, they all make up with one another, even Arthur and his dog Tug Boat.

However, true to Ted’s prediction about one of the couples breaking up, Barney and Quinn can’t bring themselves to throw away their lengthy pre-nups.  Their inability to part with the binding paperwork makes them realize that neither of them trusts the other.  Quinn points out that if they need that much paperwork to get married, then maybe they shouldn’t. Barney seems to agree. Later, at MacLaren’s, Ted and Marshall console Barney over his break-up with Quinn. He claims he’s fine with being single for the rest of his life, but a flash-forward to the not-so-distant-future reveals him telling his coworkers about how legendary his wedding is going to be.  Robin meets him at work for lunch, and when Arthur asks Barney about a pre-nup, he tells him, “Not this time.”

One down, two to go! With Quinn now out of the picture, Ted just has to break up with Victoria and Robin needs to ditch Nick.  It’s a relief to see that the creators of “How I Met Your Mother” aren’t wasting any time getting to the part where Ted finally meets his future bride-to-be and Barney marries Robin. The constant subversion of the gang’s course toward this eventual ending was really beginning to bring down the show. During this season’s premiere there was more concern than ever, as it seemed that nobody was any closer to the future that we know is waiting for them.  But with tonight’s events, it’s exciting to be one step closer to a time when each member of the group has finally found their significant other and we can enjoy at least a few episodes of tranquility.

In addition to furthering the overall plot of the show, “The Pre-Nup” just seemed much funnier than “Farhampton.”  Maybe it was because power-couple Lily and Marshall were given more material than just being exhausted zombies the entire episode. Besides that, the other couples stepped up their comedy game as well so that altogether “The Pre-Nup” was downright hilarious. It’s comforting to see that despite the show’s age, it’s still able to make us laugh just as hard as it did in the first true seasons. It can’t be easy to keep the show this amusing, as the characters get older and begin to settle down (the days of clubbing with Barney appear to be over). Overall, “The Pre-Nup” restored my faith in the longevity of the series and made me hopeful that “a little ways down the road” may actually be not too far off after all.