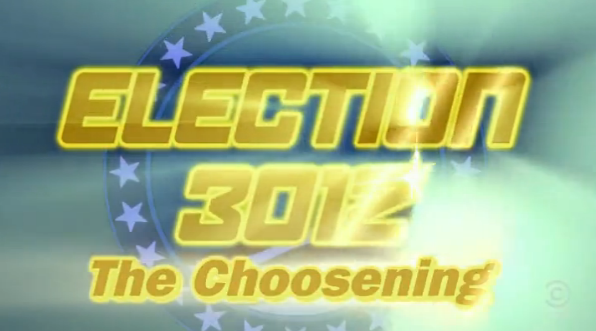 When Leela attends a debate between potential candidates seeking the party’s nomination, she finds Senator Travers, whose politics actually make sense.  The debate is a funny scene that features a Sarah Palin-esque candidate and the hilarious question posed to the candidates, “The environment – yes or no?” After the debate, Leela becomes Travers’ new campaign manager while Bender vows to help Nixon win the election.

At Nixon’s request, Bender goes on a mission to dig up dirt on Travers. While rifling through files in Travers’ office, Bender finds a Nobel Peace Prize and a perfect report card from Harvard. Unable to find any dirt, Bender returns to Nixon empty-handed. But when Nixon hears that Travers’ middle name is Zaxxar, which sounds very alien-ish, he decides to start a scandal about where Travers was born (sound familiar?).  It isn’t long until the citizens of the world are demanding his “earth certificate.”

Leela decides to break into the hospital (in Kenya, of course) where Travers was born—the perfectly named Our Lady of Patriotism Hospital. In the hospital, she discovers something odd about Travers’ birth certificate. He was born on earth alright, but he was born tomorrow! Travers reveals that he isn’t from another planet but instead from another time, and that he was sent back from the future in which Nixon ruined everything by building that fence of his. This part of the episode is a fun little nod to the plot of the Terminator” movies, and takes the homage one step further by having Travers be his own father. The birth is shown on live TV across the world, which quells the birther scandal and solidifies Travers winning the presidency.

But for yet another twist, the episode pulls from time travel rules established in another classic film: “Back to the Future.”  Travers winning the election means that Nixon never set up the fence, so there was never an uprising and never a reason for Travers to travel back in time.  Suddenly Travers disappears completely and Nixon is crowned the default victor and continuing president of Earth.  As the episode draws to a close Bender voices an opinion that some voters today may seriously relate to: “I don’t give a bag of butts about the election. Nothing’s gonna change.”

Though “Decision 3012” had it’s moments (in particular an appearance from Hypnotoad and a giraffe’s head going through a window), the episode as a whole was a bit lackluster.  Though the political commentary was amusing, that’s never been what “Futurama” does best. What sets the show apart from “Family Guy” and “South Park” is that it can really go to the strangest, most bizarre places that also end up being absolutely hilarious.  Social commentary is welcome obviously, but an entire episode focused on that is too much. “Futurama” shines brightest when it instead focuses on absurdity and features plots that could only take place in the twisted universe that the show has created.  “Decision 3012” felt more like a safe play that didn’t push the boundaries of humor and creativity as far as “Futurama” is capable of.