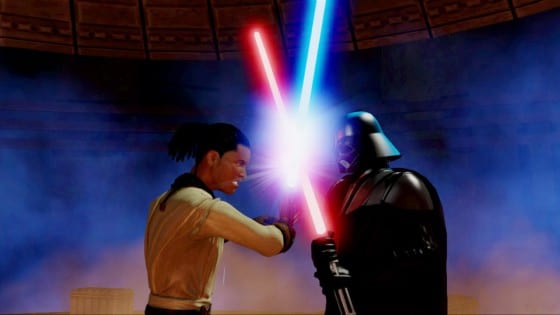 Developed by: Terminal reality/Good Science/Microsoft
Published by: Lucas Arts/Microsoft
Genre: Action/Motion
Platform: Xbox
Play it if: You’re looking for something new for Kinect and like the new Star Wars Universe
Skip it if: You’re an old school Star Wars fan
[rating:2/5]

By now you’ve probably heard all about Kinect Star Wars. You’ve heard about the delays, the Rancor..the dancing. You’ve probably also heard about how nearly everyone who’s played it has been worried that it’s going to disappoint anyone with a love for one of the world’s most beloved franchises. It can’t be that bad can it?

Yes. Yes it can

The sad news is that Kinect Star Wars is just as unimpressive as you feared it would be; in fact, it’s pretty bad. There are some wonderfully entertaining moments here, but they’re far outnumbered by frustrating control issues, terrible gameplay choices and uninspiring campaign moments. Star Wars and Kinect seem made for each other, but sadly it just plain doesn’t work.

I’ll admit that when I first popped in Kinect Star Wars, I was hopeful, Terminal Reality and Lucas Arts appeared to have found a comfortable place to tell a new story, while still fitting in with the franchise’s cannon. The game opens with C-3PO and R2D2 telling the player that Luke Skywalker has charged them with reorganizing the Jedi Library, and they find the lost story of a young Jedi master and her padawan trainees. For what it’s worth, the game does a fairly decent job leading you through the tutorial levels and into the main story.

The problem though is that the game does little to create an identity of its own and relies on new versions of your favorite (and not so favorite) Star Wars moments to fill its content and presents them as its own. Like the speeder bike chase from Return of the Jedi? It’s here…sort of. Same thing goes for the second death star attack and a few other key Star Wars moments.With all of this, you’d think Star Wars Kinect was aimed at Star Wars fans who grew up with the original trilogy, but the game is clearly made for the Clone Wars generation; awkward sounding CGI looking Yoda and all.

None of this matters though if Kinect Star Wars did what we all hoped it would, make us feel like a Jedi. You know, let us swing a lightsaber or two, force choke a few guys and perform a Jedi mind trick along the way. Instead, we get the frustration of feeling like Star Wars kid.  The vehicle sections perform well enough, but it’s the on foot sections that cause the majority of the problems. Your lightsaber is mapped to your right hand, while force powers are mapped to your right. Sounds simple enough right? Somehow Kinect Star Wars still manages to screw up your inputs all too often. Want to jump? Be prepared to dodge — right into that ditch. You may have wanted to swing your lightsaber at your opponent’s head, but the game knows that you really wanted to swing low…right where they’re blocking. Worse yet, none of the force powers feel even close to as rewarding as they should be.

What you’ll likely find most annoying about Kinect Star Wars is just how much it takes control away from the player. We’ve seen Kinect games like the Gunstringer handle on rails sections brilliantly, but Lucas Arts and Terminal Reality are insistent on not just showing the players how the game works — but taking their hand and almost walking them through it at every step. You’ll clear one section..then go through a mini movie..repeat ad nauseum and you have what the majority of the game feels like.

So, let’s talk about those dancing scenes, shall we? For those who aren’t aware, the game not only features several dancing scenes, but also allows you to control some of your favorite characters, like Han Solo and Boba Fett to dance as well. Now I was ready to start out this review by completely going off about it — but you know what, they’re some of the game’s most fun moments. Yes, it’s weird to see these badass characters that I love dancing, but if you can get past that and let things go..it’s not all that bad.

The Blast Factor: It’s gotten to the point in recent years that it’s tough to take Star Wars seriously, and that actually helps Kinect Star Wars, as it’s similarly hard to take the game seriously. Yes, there are some enjoyable moments here — but they’re far outnumbered by the under-performing mechanics, shoddy presentation and missed opportunities. For all of you who have been waiting to feel like a Jedi — keep dreaming.