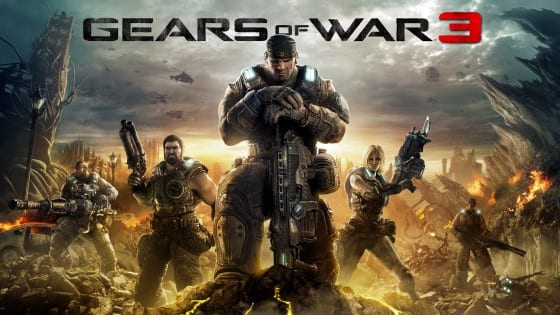 I’ve always felt a weird connection to the Gears of War franchise. Maybe it’s because both of the first games were released on my birthday

and it became a ritual to check out Delta Squad’s latest mission as I got older – but I always felt like Gears of War 3 was somehow my game.  So please, forgive me if I gush a bit.

With Gears of War 3, Epic Games has taken the formula set by the first two games and tweaked it ever so much to create the perfect finale for their long running series. Everything you love is here, the chainsaw lancers, the grubs, the brumaks, but there’s also so much more.  The characters are deeper, the story is more engaging and the entire experience is deeply satisfying. Gears of War 3 is undoubtedly Microsoft’s biggest release of the year, and it’s also the best; one that if you own an Xbox – you simply have to experience.

It’s been eighteen months since the end of Gears of War 2, where Jacinto, the last human city was sunk in an effort to flood out the locust horde. As a result, the remaining survivors have setup camp throughout the world and must ban together to survive – food and weapons are scarce, and hope is bleak. To make matters worse, the high levels of imulsion left in the world (a luminescent, highly volatile, low-viscosity fluid) have turned some of the locust into glowing, mutating monsters.  Marcus Fenix, the leader of Delta Squad gets a message that his father is alive and being held captive. Your job is simple – return order to the world and find Adam Fenix.

The story in Gears of War 3 is easily the most well paced and thought out of the entire series. For the first time ever, Marcus and the rest of Delta Squad aren’t fighting the Locust because they’re soldiers; they’re doing it for their survival. Throughout the game, there are several emotional moments that for the first time ever, really let us see emotion from the members of Delta Squad.  One of these moments happens early in the game, where Cole returns to his former hometown, ravaged by Locust and Lambent in search of supplies and see’s statues and images of his former career as a thrashball superstar. Staring at a cardboard cutout of himself; Cole remarks to his squadmates about seeing his own death.  It’s a bit humbling for these characters, who have previously only been seen as muscle-bound brutes to show real emotion for the first time.

Of course, at its core, Gears of War 3 is built on its action – and it does not disappoint.  Sequences in the third game are incredibly large compared to those of previous games with huge badass monsters to take on, and are anything but easy. The Lambent, which sprout up from stalks from underground offer a change to the formula the franchise has setup for the last two games; as they’re mutating abilities will usually allow them to reach behind your cover to attack you, or worse – smash right through it. This of course forces you to adapt your strategy since you won’t be able to stay behind one source of cover for an entire battle.  The Lambent will explode when you defeat them, so it’s best to keep your distance less you want to take an excessive amount of damage even when succeeding. It’s these elements that make Gears of War 3 feel like a true evolution of the formula. 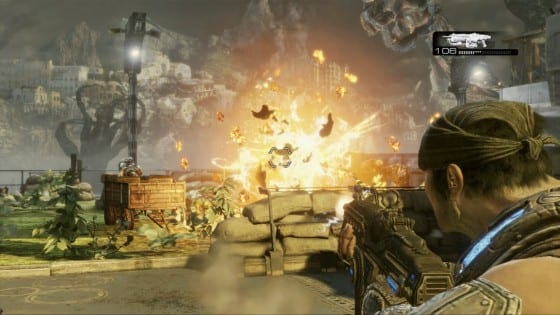 What surprised me most about the campaign in Gears of War 3 was just how much room it left for creativity and error. The first two Gears games were strictly linear affairs, but here, there’s a bit of user choice. Of course, you won’t be able to navigate the battlefield as you choose, but take for instance one section early on in the game where you try to sneak into a Locust stronghold without sounding the alarm. Your obvious route is to sneak around and pick off guards with the sniper rifles conveniently strewn about the battlefield (you’d think they wouldn’t want to leave them around like that), but letting one of the guards get to the alarm doesn’t necessarily mean you fail, as you’ll just have to take on the remaining horde head on. Interestingly, I also tried sounding the alarm myself, which proved to be the hard, but most fun route.It’s when you’re fighting the non-infected Locust though that the game truly feels like a Gears of War title. Don’t get me wrong, I liked the challenge of the Lambent, but you can’t do a lot of the things that make Gears unique. It’s with the Locust that you can do the game’s signature executions (there are a number of new ones here, including some really badass ones with the trusty chainsaw lancer), and it’s the Locust that feature the superb AI that the series is known for.  There are of course several new Locust types, including the Savage Grenadier and the Digger Boomer. Trust me; you’re going to hate the damn Digger Boomer.

With these new Locust types comes new weapons, and they too deliver. Killing the Digger Boomer gives you the digger gun, which sends missiles that burrow under the ground and the ground and come up rip the target to shreds. The most prominent new weapon though is the retro lancer, which replaces the chainsaw on the lancer you know with a musket like blade. At first, I hated it, but the more and more I used it, I preferred to always have one in my inventory. Rather than revving up a chainsaw to melee attack an opponent, you’ll hold down the b-button to charge and impale them. It’s deeply satisfying, perhaps even more so than the traditional lancer.

Apart from the campaign, the game features an impressive online suite. There are of course the competitive modes, which are powered by dedicated servers and features new game modes, and some awesome maps (I’m partial to the checkout map, which puts you in an abandoned grocery store and thrashball, which puts you in an old stadium –complete with falling jumbo-tron). For the first time ever, Gears of War 3 features full four player co-op throughout the entire campaign. 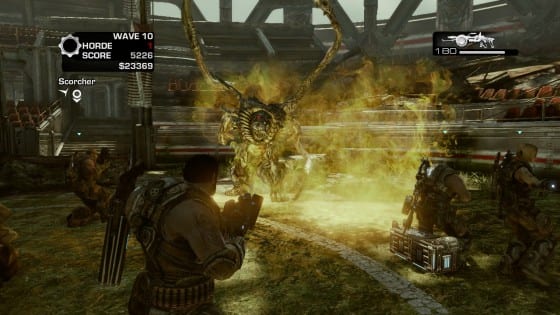 Horde mode also returns in the form of Horde 2.0, a new and more strategic way to play the survival mode. At first, I wasn’t sure about the new changes, as you and your squadmates buy barriers and bases to keep out the Locust and the Lambent, but it started to grow on me rather quickly. It forces players to work together, rather than camping out in certain areas. Also new to Gears 3 is Beast Mode, which is like Horde, but lets you play as the Locust Horde and target humans.  You start with simple tickers and soldiers, but as you progress you unlock new Locust types – it starts slow, but it’s a ton of fun, especially if you’re able to get a group of dedicated friends together to play the mode.

The Blast Factor: Gears of War 3 is easily the best game in the franchise, and it makes its case for best Xbox 360 game period. It’s a deeply satisfying and at times touching game that takes the formula set forth by the previous iterations and tweaks it in just the right places to make an incredible gaming experience. Simply put – if you own an Xbox 360, your library is not complete until it includes Gears of War 3.

Gears of War 3 releases worldwide for the Xbox 360 on September 20, 2011. A copy of the game was provided by the publisher for this review.