This opens the Academy Award-winning Irish mob movie, “The Departed,” and sums up the life of Boston mobster Whitey Bulger.

The 2006 Martin Scorsese film loosely based the character of Frank Costello (Jack Nicholson) on Whitey Bulger, and the parallels are obvious, from the scores of women that surrounded the mobsters to the glasses they wore. 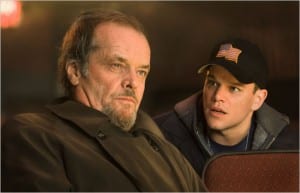 The way the mobsters controlled South Boston was the main similarity in the movie. Bulger was behind almost every business in Southie; he had many patrons who both loved and feared him.

Costello also had his nose in business, often walking into stores in the movie and demanding money from the owner, just as Bulger used to do. Costello also hinted at his owning a movie theater in one scene.

Costello and Bulger were also not afraid to get their hands dirty. Both are portrayed as first-hand killers, and both reputedly killed women.

Bulger and Costello also had cozy relationships with law enforcement. Both were FBI informants, and had friends on the inside that kept them safe. For Bulger, it was Agent John Connolly. He even warned Whitey of his impending indictment.

Colin Sullivan was Costello’s informant in the movie. He kept Costello out of trouble as he climbed the ranks in the State Police. However, Sullivan is ultimately responsible for Costello’s demise. Connolly fell before Bulger did.

The final glaring similarity between the mobsters was their right hand men. In The Departed, Costello had French and his gang of ethnic Irish. He carried out all of Costello’s operations. Bulger had Stephen “The Rifleman” Flemmi and of course Kevin Weeks, whom he entrusted with every secret, except his status as an FBI informant.

Scorsese claims that Costello was not solely based on Bulger, but the similarities are astounding. Both mobsters carried out a reign of terror over Boston, but Costello’s was neatly wrapped up within a two-hour span. Bulger’s reign lasted a little longer and had real effects.