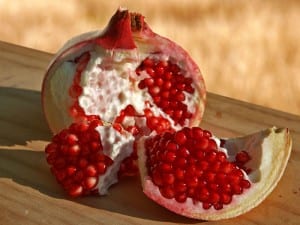 I don’t think pomegranates taste very good. There, I said it and it feels really good, as confessions that can leave you feeling marginalized often do (ex. Admitting that you think that the remix to Ignition is one of the ten best songs ever, which I actually believe is undeniable).

It has been nearly a decade since the pomegranate began being widely marketed as a superfood that is full of antioxidants and vitamins. In those newborn moments, around the same time Tom Brady was making us realize that Drew Bledsoe really wasn’t that good, the heart shaped logo commercials started popping up on mainstream television. We were made to believe that if you care about the future of the universe you will drink pomegranate juice or dig around the membrane ridden rind of fruit to collect the obnoxious, finger-staining seeds (arils, actually, as a 27-year-old who sports a yoga mat as a nearly constant accessory is bound to snort to themselves). If you were exceptionally healthy, and occasionally got wheatgrass shots as a social activity, you would drink the juice straight up, riding out the storm of bitterness because you had the foresight that the tannic liquid that sends slight shivers of displeasure up your spine would make you live longer, and therefore be a better person.

This sentiment of healthy living eventually started to trickle down the mountain streams of Prius’ and amateur photography to the hedonistic laymen’s water source located in what most call “mainstream society” (is there a more telling proof that we live in a consumer-based society where the line of who the consumer is and isn’t becomes increasingly blurred with each passing moment than the fact that anyone with an iPhone can state whether or not they like artsy photographs by simply pressing a button and taking artsy photographs? “Hey, look, I appreciate old photos from the twenties. That’s why I put my camera on that setting during Alanna’s birthday at Hunter’s apartment”. You are taking a picture that others can consume, kind of. What you are doing, more so, is consuming a technology that rewards you with pleasurable and instantaneous real life visuals).

Anyways, once that damn pomegranate made its way down here two things happened in succession. First, stores like Whole Foods and Trader Joe’s became inordinately more popular and expanded at a staggering rate because they sold food that was of higher quality; they recognized an opportunity to exist outside of a niche. Then the mainstream supermarkets re-branded themselves and took on more products that would cater to this ever growing demographic of educated east and west coasters while keeping on the products that consisted of processed ingredients which have made Americans happy for decades. The perpetually-failing Trix rabbit began existing in the same aisle as nutritious Kashi Go Lean, whose box consists of a Venn Diagram illustrating the grams of protein, fiber, and low-fat it has (I didn’t know “low-fat” could be the subject of a sentence, but apparently I was wrong. I also heralded Michael Cera as the next Tom Hanks to friends around the time when Superbad and Juno came out. It appears I was wrong about that as well).

During this time 7-11 started carrying Odwalla drinks and Cliff Bars, all of which contain various superfood ingredients and bank off of being as rustic as possible. This used to be the weird food that was at the counter of REI when you were buying hiking boots for summer camp (and you imagined tasted like chalk). Then in 2001 Coca-Cola bought Odwalla, allowing the beverage to, hypothetically, be distributed anywhere.

The Odwalla Superfood drink, which is a deep-green shake that contains barley grass, wheat sprouts, spirulina, and chlorella (as well as a bunch of sweet, everyday fruits), has an ironic, self-deprecating couple paragraphs on its own bottle. The label tells us that the drink looks like vomit, but pleads with us to try it because it tastes so good and is better for you than nearly anything else. This is a conscious maneuver, sort of like the slightly awkward girl being funny and self-deprecating to hang out with the pretty girls. “I know it doesn’t look like I should be here, but I have value. If you think deeply, you will see that.” Odwalla can exist amongst sodas and sports drinks because it knows its place (for better or worse). These health drink and bar companies are now a permanent part of our supermarkets and convenience stores. If you are feeling bad about yourself and you stop at your local mart, you can now choose to buy a drink that looks like pond scum, along with some raw, unsalted almonds and automatically get a quick jolt of pleasure cascading through your brain because, for once, you made a decision that is not harmful to your body (the metaphor involving the less pretty girl could go on here, but I will spare you). The pleasure of eating isn’t just in the barely conscious act of consuming a smorgasbord of simple carbohydrates to escape anymore; it also lies in the super conscious act of consuming things that are good for you.

The chase for the fountain of youth is over; we now have supplements of youth and beta carotene. Finding a shortcut to living forever has been replaced by obsessive types doing everything they can to look young as long as possible and to live for as long as possible (realism replaces daydreaming), genetics be damned. Yet, as I browse through supermarkets and take a look the prices on some items that I feel like I am supposed to eat now, I wonder whether or not this health craze is necessary. Maybe I don’t need that pomegranate to live past 50; maybe we had the secrets all along. All these new supplements and drinks and trendy, rare fruits that you burn 300 calories preparing to eat were marketed as healthy because no one was buying them before. They all needed to say something about themselves to standout. Yet, all these old, tired vegetables that we used to get fed at dinner are, for the most part, just as good for you as these new, skinny jean wearing bastards.

The most valuable thing about the age of nutritional enlightenment is that it has made us conscious that we should take time to think about what we put in our body; not that it gave us new foods to consume. Celebrity nutritionists and their ilk have turned not putting shit into your body into a science, which it doesn’t have to be. Here are some rules to live by that make things simpler than counting the amount of each vitamin you consume on a daily basis: