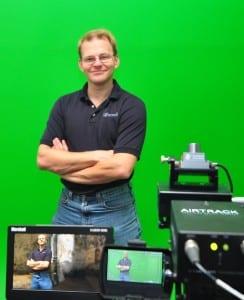 Movies or television series’ are not just about the actors, but about the visual aspect of what you are watching, especially when it comes to the science fiction and fantasy genre, which sometimes relies heavily on CGI and such.

In the world of film making many steps are taken to bring you that visual aspect and most times we don’t think about the hours, days and processes that go into the work.

A company in Venice Beach, CA called Lightcraft Technology, has created the perfect camera system to improve the production pipeline. Click here to read a little more about that.

Eliot Mack, the founder and system architect of Lightcraft Technology has for the past 8 years been helping filmmakers work in real time visual effects with the system he developed with Co-Founder Phil Mass called Previzion.

We asked Eliot some questions about his camera system and here are his answers:

BLAST: Why did you create this product? What was the thought process behind it?

ELIOT MACK: I started building Previzion out of frustration with both the traditional production process (sets, locations, etc.) and the traditional visual effects process (tracking, keying, rendering, compositing, etc.) I had learned enough VFX to complete about 2 shots with standard methods, but simply could not believe how hard it was to do basic things, like pulling a key well or matching a lens accurately. At that point, I understood the underlying math and could start building a system to handle the repetitious, boring tasks like lens matching and camera position tracking.

BLAST: What movies/TV shows might the readers have seen this unique tech involved in?

EM: The productions with the widest viewing audience are probably “Alice in Wonderland,” the 2010 Tim Burton film, and “V,” the sci-fi television series.

BLAST: What future projects might this technology be used in?

EM: The two major areas we work in are feature film/high end episodic previsualization, and real time finishing, where the show is composited on the stage. We’re being used on complex stereoscopic motion pictures, to integrate stereo live action cameras and animated CG characters, as well as in telenovelas, where the production volume is high but the keying has to be very good. The underlying connection is our focus on high accuracy and image quality. 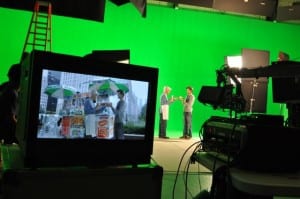 BLAST: Is this the only technology of its kind in the market today? And if no, how does your company differ from others?

EM: There are other types of real time keying systems that have been used for years in TV news, weather, and sports. Previzion is the only commercial real time system that is specifically designed for the demands of motion picture and television VFX production.

BLAST: How will Lightcraft Technology benefit movie making in the future?

EM: Previzion lets productions do much more creatively while saving money. Visual effects open up the storytelling palate, but the cost and complexity has limited their use. We’re already creating photorealistic sets that render in real time and fit on a thumb drive; painting a wall green and setting up some tracking targets is a lot less expensive than blocking off city streets or sending an entire production crew to some remote area.

BLAST: Where do you see your company in five years? In 10 years?

EM: We’re going to continue making the systems faster, more accurate, and easier to integrate into productions. Most people think of visual effects as limited to science fiction or summer blockbusters, but the rate of VFX speed and accuracy available in Previzion lets a wide range of productions use them.

BLAST: In regards to film school/students do you see your Lightcraft Technology being utilized in school as a teaching method?

EM: Very much so. In fact, we think that the technology could change the nature of student films. Our photogrammetry tools make it possible for a single person to go out with a DSLR and capture enough stills to create a photorealistic 3D background model. Students can expand the scope of their projects while they are learning to use the same on-set tools used on the largest VFX projects out there.

BLAST: For the average movie enthusiast who loves film, will they see a difference between traditional methods of creating film (actors filmed in front of a green screen) over your Lightcraft Technology?

EM: Previzion is in many ways similar to traditional VFX work. It uses the same blue and green screens and some of the same 3D modeling tools to create the backgrounds. The key difference is the speed – it’s a complete visual effects pipeline that happens to run in real time.