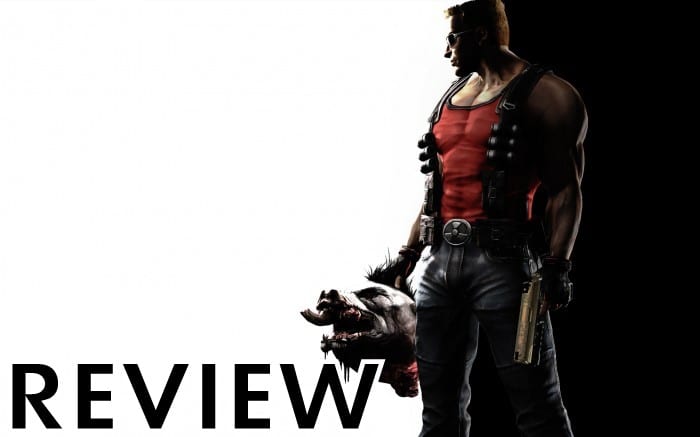 A man wakes up from a coma after almost 15 years. His friends, family and the world around him are vastly different than the world he remembers. The man makes a jokes about something no one remembers and everyone laughs politely. This, in essence is what the majority of Duke Nukem Forever feels like. Yes, it’s great seeing  Duke after all these years, but he is truly a man stuck in time – and that’s not a good thing. Graphically inferior to most modern day shooters , Forever is filled with problems that make you wonder why Gearbox

They say that patience is a virtue, and using that logic, Duke Nukem’s fans are saints. By now, you surely know the story of Duke Nukem’s return to games. Announced nearly 15 years ago, Duke Nukem Forever has been shuffled from developer to developer before becoming virtual vaporware when it’s current studio, 3D Realms closed its doors in 2009. That is, until Randy Pitchford and Gearbox software swooped in and announced that they would be publishing and finally releasing the game. After all of this time, fans of the long running series deserve more. Much more.

Right from the get-go, Duke Nukem Forever looks ages behind most modern day shooters. Textures are messy and undetailed, there’s a ton of slowdown and screen tearing and the entire game just looks unpolished. Character models look robotic and outdated as well. Okay, I get it, Gearbox wanted to keep the spirit of the original game intact, they wanted it to look like it’s still from that era of gaming, but they better hope that the rest of the world, and not just the gaming public is in on the joke, and are willing to pay $60 for a game that looks like it’s decades old. 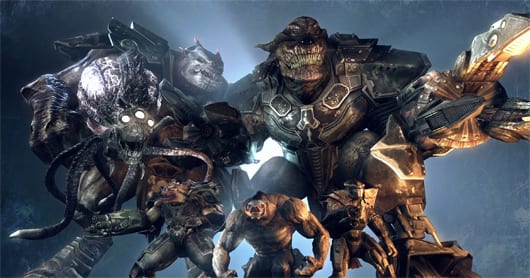 Of course, the appeal of Duke Nukem has always been it’s take no prisoners in your face adult humor. It’s here (the first  two minutes feature quicktime events of the game’s protagonist peeing and then ability to pick up poop and throw it), but unfortunately it too feels dated. Remember movies like Team America: World Police and the famous political scandals of the 90s? Because Duke Nukem and Gearbox sure do.

The game is filled with dated jokes and references that just feel so stale. Oh, there are references to modern day; like the time Duke walks past a suit of Spartan like Armor and mocks it, saying that he doesn’t need it, but they’re few and far between.   Curiously enough, it’s this Halo joke that points out another one of Duke’s issues. It scoffs at mechanics from games like Halo, but that regenerating health bar seems awfully familiar doesn’t it?

For the majority of the game, Duke Nukem Forever feels an awful lot like you’d expect, a throwback that harkens back to the shooters of the early 90s. The good news is that this makes for some pretty cool moments; like the one that finds Duke Nukem racing around in a miniature RC car, but the bad news is that this too feels incredibly dated. After nearly 30-45 seconds of loading each time you load the game (the load screens are also filled with helpful tips like “Enemies sometimes drop weapons”), you’re treated to horrid enemy AI, awkward puzzles and terrible uneven aiming. The worst part offender by far though is the game’s terrible pathfinding and level design.  You’re going to find yourself backtracking through levels and searching for objectives as the game employs no map, and very few levels feature an easy to identify path.

Of course, Duke Nukem Forever also has multiplayer modes, but they too are just as buggy as the singe player campaign – just with a lot of Dukes instead of just one. We setup a number of play tests with a few other outlets that got an early copy of the game and featured tons of lag, and uneven play. Hopefully this will be addressed via  a patch once the game comes out, but for now it was nearly unplayable at times. 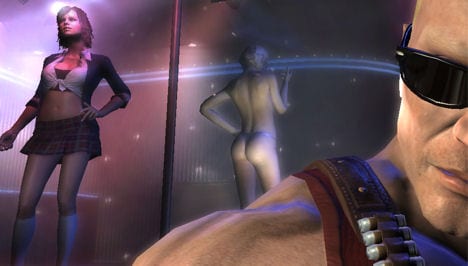 Strippers. The Duke's got 'em.

Blast Factor: After continuous delays and even a cancelation, Duke Nukem Forever is finally here and the results are unfortunately disappointing.  The humor is lacking and the gameplay feels incredibly outdated. Want a modern day version of the classic Duke Nukem formula? Play Bulletstorm, not this disappointment.