Part two of a series. 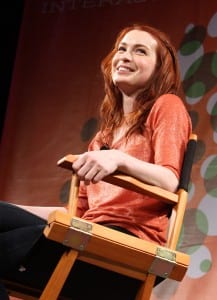 Felicia Day is a goddess -- a geek goddess (WireImage)

The backlash against the New York Times’s sexist review of “Game of Thrones” has brought geek girls out of the woodwork to announce their presence. The world can no longer ignore the outspoken, opinionated faction of women who enjoy the spoils of nerd culture: Science fiction, fantasy, comic books, video games, horror movies, and a finely-executed action sequence.

Yes: We are living during the rise of the geek girl.

Gone are the days when one can make sweeping generalizations about all women and their proclivity for melodramatic medical dramas of melodrama and drama. No more can you classify a novel as “women’s fiction” without noting that it will only appeal to the women who aren’t already busy perusing the sci fi and fantasy section of the bookstore or picking up the latest issue of their favorite graphic novel.

Today the geek girl wants and expects more from her fiction. She wants epic fantasy and gritty science fiction. She wants “Game of Thrones” and “Battlestar Galactica.” She wants fiction that will present interesting and new metaphors for real life, which will exercise her imagination, and maybe come with some spaceships or dragons.

I learned to be a geek girl at the feet of the master: My own mom. She raised me on a steady diet of the Stars, both Wars and Trek, and science fiction novels. When my mom was in middle school a male classmate caught her reading an Andre Norton novel (a woman science fiction writer with a man’s name). He was aghast, and said, “But you’re a girl!” Her answer: “So?” Thank God the ‘60’s are over.

I’ll never forget when she told me that most people think science fiction and fantasy isn’t really “for girls.” It was like learning that the Earth is flat and boring after being told that it was being innovative with its roundness for so long. It had never occurred to me that genre fiction, which I immensely enjoyed more than the “Sweet Valley Teen” novels of my middle school peers, was something I could be ridiculed for reading.

Should I have been ashamed for being a geek girl? According to the loudest detractors of geek girls and their interests: Yes.

You know the stereotype: The friendless weirdo with pimples and unwashed hair who wouldn’t know normal social interaction if it stole her copy of “The Silmarillion.” The infinitely ridiculed, un-cool, and un-loved girl.

For some reason being a nerdy girl was always far worse than being a nerdy boy. But isn’t that always the case? A boy can be anything he wants to be, but a girl… well, she’s got to fit into one of a handful of roles, and if she doesn’t then there’s something wrong with her.

Geek girls were told that epic space battles and medieval fantasy were for boys. What self-respecting woman would want to play a video game, let alone an FPS where the protagonist wore mechanized armor? Why weren’t we spending our time reading family dramas and romances and literary fiction? Why did we have to have such over-active imaginations?

Now, I’m just spit-balling here, but I was under the impression that an active imagination implied intelligence. After all, where would Einstein have gotten without his rampant imagination (and a deep understanding of applied mathematics)? So in fact, to be a geek girl is to be an intelligent girl (not that non-geek girls aren’t intelligent as well). But therein lies the problem: There is also a stigma against smart women, one that just won’t go away no matter how many brilliant women win the Nobel prize or become astronauts and college professors.

The recent surge in self-proclaimed geek girls (they’ve always been there, but quiet) has garnered attention. Suddenly being a geek girl is not such a bad thing, or at least there are so many of them “out of the closet” that their numbers demand respect. Networks and publishers are realizing that geek girls are a force to be reckoned with. They have appetites that must be sated, and they will not be ignored.

Already the geek girls in the entertainment industry have paved the way for their fans to say it loud and say it proud. Women like Felicia Day of the web series “The Guild” have become veritable geek goddesses, and writers like Jane Espenson show that a woman can write some of the best episodes of science fiction shows like “Battlestar Galactica”, “Firefly”, and “Torchwood.”

The rise of the geek girl will also be a golden age of popular culture and entertainment. The geek girls in the nerd fandoms will call, and the geek girls in the industry will answer. We already see powerful geek girls taking the driver’s seat in much of the most popular genre fiction (“The Walking Dead”, “Spartacus”), and still more are writing well-respected reviews of said fiction. The geek girl’s voice is one that can enrich nerd culture.

Such a rise in geek girldom requires a closer examination of the sub-culture.

Why do they have to be “geek girls”? Why can’t they just be geeks who happen to be girls? The feminist in me would prefer that terminology. Why does someone’s gender have to be defined by their interests, and vice versa? But in this case, there is a reason that geek girls call attention to their gender through their own words.

Saying you’re a geek girl doesn’t just mean you’re a geek who comes complete with a uterus and X chromosome. It means you are, simply by existing, flying in the face of societal norms. You’re a rebel, a supposed rarity, and according to some geek guys, a commodity.

Much as I hate to admit it, women being openly in love with science fiction and fantasy –and sci fi and fantasy openly embracing women– is a relatively new development. The New York Times review of “Game of Thrones” made it all too clear that geek girls are not yet fully accepted by mainstream media.

That is why we are geek girls and not simply geeks: Because at this point we need to call attention to our existence and our gender if we ever hope to gain full acceptance. We need to grasp a firmer hold on our place in pop culture and entertainment, make ourselves known, so that some day soon geek girls will not be perceived as a rarity, but as the norm.

If you’re looking for other geek girls on the web, visit Geek Girls Network, Geek With Curves, ThinkHero.com, io9.com, and Geek Girl Diva.