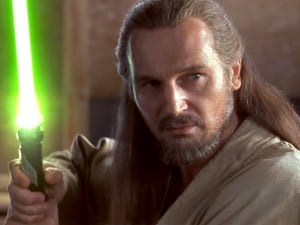 Liam Neeson will be reprising his role as Qui-Gon Jinn from “Star Wars: Episode I” in two upcoming episodes of “Star Wars: The Clone Wars” animated series on Cartoon Network.

Neeson will play the character, who comes to Obi-Wan Kenobe in visions, in two episodes this season, airing January 28 and February 11. The episodes will be part of a three-part story arc that examines Anakin Skywalker’s role as the prophesied “chosen one.”

If you head over to Entertainment Weekly, they have an exclusive video up, previewing a scene which Neeson’s voice will be featured in.

What do you think? Not many of the original actors from the films have voiced roles on the animated series, but it’s grown into a very solid animated show in its three seasons.