Is it possible to have a super hero with no super power, no redeeming qualities, no special talents and no moral fiber?

It’s an interesting question, and Indie darling director, teamed up with writer and star Seth Rogan, seem like the perfect, if unlikely candidates, to give it an answer in “The Green Hornet,” based on the 1930s radio show. The concept is fascinating, however the product is simply a profile of an unlikeable person, dressed up in a costume. 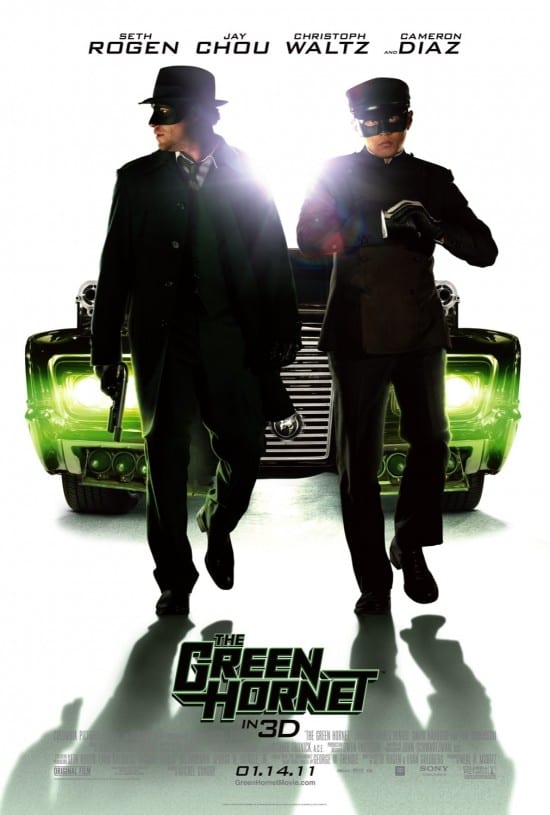 It pains me to say this; I really wanted to like “Green Hornet” with its strange choice of director and quick-witted star. But Rogan (as well as co-writer Evan Goldberg) wrote Britt Reid, party boy and newspaper publisher-turned-vigilante, to be so unpalatable, so manipulative and weak, it becomes embarrassing to watch him. There is no Batman-esque dark night of the soul, no Spider-Man adolescent angst, and certainly no Superman moral rectitude. There isn’t even any Iron Man charm softening the edges of Rogan’s Hornet.

The back story gives him a dead mom and a dick father, which is supposed to be the reasoning behind his meanneass and callowness towards his fellow human beings. When his father dies, supposedly from a bee sting, Reid take over his family’s news empire and discovers his father’s assistant, a Chinese immigrant named Kato (Jay Chou), who’s a mechanic, karate expert and all-around renaissance man. Together they become vigilantes who actually use their notoriety as a weapon.

I have to say, it’s entertaining for a little while, and even freeing. Here, finally, is a selfish, pompous, manic hero for the rest of us- a guy who uses a cape and a veneer of ethics to work out his daddy issues like a man! Reid talks very much like Rogan’s characters from other films, with a constant, slightly drunken stream of conciousness that really is pretty funny. And Chou as Kato, with his taste for classical music, badass karate moves and beautiful eyes, is more crushworthy than a thousand Edward Cullens with their shirts off.

But after, say, half an hour, Reid’s character isn’t just enraging- it’s boring. the genius of Robert Downey, Jr.’s performance in “Iron Man” was that he would do despicable things, but he was so damn charming you just didn’t care. And by the time he becomes Iron Man, you actually believe it.

Also, you know, he was a genius who could actually do super hero things. In case you haven’t figured it out, Kato is the one  with all the skill and ingenuity to be a super hero. Reid’s job is to use his newspaper as a marketing tool and buy all the stuff Kato needs. And then take all the credit. Perhaps it’s silly to rag on a character like this- normally I avoid making judgements of fictional people. But it’s annoying to go through a whole film thinking, “But I like Kato! He’s funnier and smarter and can actually do martial arts! Why can’t the movie just be called “Kato”?

There are wonderful moments in “Hornet”, mainly related to the film’s casting. James Franco makes a hilarious cameo as a drug lord, and Edward James Olmos galumphs companionably around Reid’s newsroom as its editor. Christoph Waltz, maybe the best villain of the last decade in “Inglourious Basterds” makes a lot of a small role as Chudnofsky, a criminal kingpin with an inferiority complex.

But Reid is the star. Hell, his alter-ego is the title. And if there’s no change, no illumination, why are we watching? Reid’s character ends the movie the same old bastard he started as- just in a mask. You can add as much 3D as you want to that story- it doesn’t make it interesting.