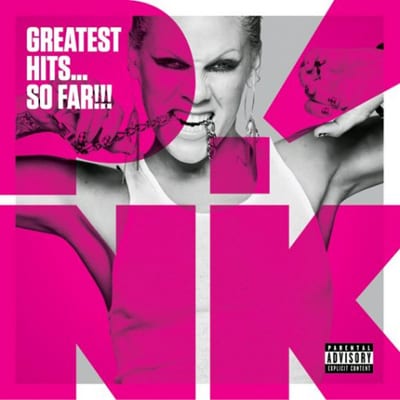 Maybe it is a tuning point in her life since Pink, whose real name is Alecia Beth Moore, is going to be a mother soon, and this album, coming with a music video DVD, covers singles from her first album “Can’t Take Me Home” to her latest studio album “Funhouse” so you can fully witness how she has progressed since when she released the first single “There You Go” in 2000.

Pink characteristically looks tough and powerful but at the same time, she sings some very fragile songs. Even when she is having a hard time, she never forgets to show her true feelings through her songs and keep connected with her fans. The DVD with the album has the clip of her modern classic upside-down “Glitter in the Air” performance. She performed the tune at the Grammy Awards 2010, moving the audience.

When she creates songs, the lyrics are always honest with what she feels. For example, for the song “Glitter in the Air,” her stage performance is very acrobatic, when we pay attention to what she says, she softly sings like this: “Have you ever fed a lover with just your hands? Close your eyes and trust it, just trust it. Have you ever thrown a fist full of glitter in the air? Have you ever looked fear in the face. And said I just don’t care?”

The majority of female pop singers pay focus on how hot they can look and how sexy they can dance, which prevent us from seeing their true selves; Pink’s consistent honesty and courage to speak up is her strength. She speaks her mind, especially when she created the song “Dear Mr. President,” it was about George Bush and how some situation in this country, which was supposed to be taken care of, was left like that. She did not attack Bush but asked why some people were struggling so hard under his governmental authority

Her new songs “Raise Your Glass” and “F**kin’ Perfect” focus on her party fun side and emotional side, respectively.

Pink has claimed that she was influenced by Janis Joplin and covered her songs at shows a lot. But after going through her both personal and professional ups-and-downs experiences, she gradually started radiating h

er own music, when she released third album “Try This.” When she was going on a showcase tour in 2006 in order to promote her fourth album “I’m Not Dead,” it was not “Janis Joplin-like Pink” anymore. She was fully using her powerful vocals in her own way.

She keeps moving forward in her own way as well as with her true emotions. It will be really interesting to see how her songs will be influenced when she’s a mother.