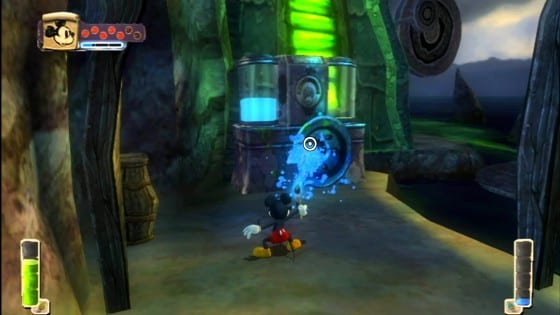 Hello, my name is Joe Sinicki and I’m a Disney-a-holic. It’s okay, I can admit it. Now please understand, though – I’m

not talking the everyone break into dance in a cafeteria, oh no they know my secret pop star identity tween version of Disney, I’m talking about the classic years. The Alice Comedies, the  Silly symphonies; the golden age of animation, age and wonder. Perhaps that’s what drew me to Epic Mickey from the start, the game’s lead designer and producer, Warren Spector, most famous for games like Thief and Wing Commander is just as big of a fan of the godfather of animation as I am, and I trusted him to craft an intriguing tale that also serves as a love letter to the Disney legacy.

He did. Disney Epic Mickey is a tightly wound, and even touching story that will even the most hardcore Disney fans won’t be able to resist; filled with nods and cameos by even the most random Disney characters, and theme park attractions, this isn’t your average Disney title. Yet, as a result of a number of almost broken mechanics, and one of this year’s worst camera systems,  the game feels almost unplayable at some points.  Still though, if you have any interest in the world of Walt Disney, Epic Mickey is not to be missed.

The game opens with a flashback to a few years ago in Yen Sid the sorcerer’s laboratory. On the sorcerer’s desk lies an intricate model, which really serves as a world for the forgotten characters in the Disney universe, or “things that have been forgotten” as they’re called here. Becoming interested in the model, Mickey sneaks in while Yen Sid is away and begins to play with it. After fiddling with it for a while, Mickey accidentally creates the Shadow Blot (a mischievous, smart and some say insane thief as seen in classic Disney cartoons) who, despite the best efforts of Oswald the Lucky Rabbit and the other residents of the forgotten land, eventually takes over. To make matters worse, Mickey panics and tries to clean up the mess with a sponge, and a bottle of paint thinner, which in turn makes the forgotten world a desolate wasteland. Years pass, and Mickey’s transgression is forgotten until one day the Phantom Blot enters Mickey’s house through a mirror and drags him in. Sensing an opportunity, Oswald devises a plan to capture Mickey (who he’s become jealous of) and steal his heart.

This is perhaps the game’s most interesting aspect, how it treats its protagonist. In the world of Disney, especially lately, Disney plays it safe with Mickey, he does no wrong, but here – it’s his transgression that causes the game’s events to unfold. That mechanic plays out throughout Mickey’s journey through the wasteland as you’re able to decide just how you play through the game. Do you play the good side, using your paint brush to restore order to the wasteland, or do you take the easy way out and dissolve any of your obstacles with the bottle of thinner. Your actions and decisions will have a lasting effect on just how the world in Epic Mickey takes shape, and you’re going to want to play through multiple times to see just what could have happened. 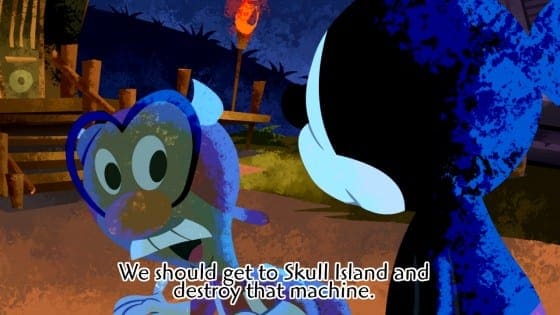 Throughout Epic Mickey, you're going to meet many interesting forgotten characters.

There’s no doubt about it, those who know and are familiar with Disney lore will appreciate the work Spector and Junction Point have put into crafting Epic Mickey. There are references here to everything from them park lands, to old cartoons and even a tongue-in-cheek look at the mass commercialization of Mickey himself. The real treat though for folks like me are the small touches and nods to things that prove Spector cares about the brand, and the properties that inhabit it. That’s not to say that casual fans won’t  be able to jump in, as the game is instantly accessible despite its depth.

At its heart, Epic Mickey is a pretty straight forward platformer, and there lies a good portion of its problems. Theworld of Epic Mickey is so creative and fun to explore that using basic and seemingly uninspired platform mechanics can take you out of the game incredibly fast.  Oh, and then there’s the camera — Let me see how to put this most simple – you’re going to hate the camera in Epic Mickey, it could very well be the worst camera I’ve seen in a platformer this year. Using a dynamic system, the camera follows you around automatically, or  at least, that’s how it’s supposed to work.  The camera seems to be intent on placing itself in the worst possible places. Going down a series of ledges? You won’t be able to see your next jump. Fighting a series of enemies? You’ll have to take them on without seeing them.

Another issue is with the game’s targeting system. Your main attacks are either a paint stream or a thinner stream, which works great from a far, but up close it’s a mess. You’re going to have a tough time hitting any enemy that’s close, and you don’t have a dodge maneuver, which means Mickey’s going to be taking a ton of damage. Luckily the game’s auto save feature is pretty generous and you won’t have to start over too far.

The Blast Factor: With Disney Epic Mickey, Warren Spector professes his life-long love for the works of Walt Disney with a gripping and even touching tale. It’s a love letter to not only the legacy of Disney, but to a golden age long forgotten – it’s just too bad the game’s mechanics aren’t up to par. Still though, it’s an interesting enough tale that differs from anything available on the Wii.