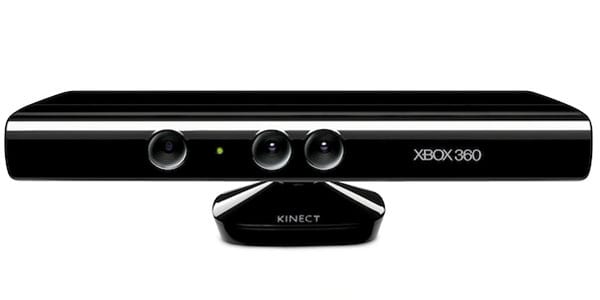 It’s here. After months of advertisements in men’s restrooms, on cereal boxes and even plastered all over Justin Bieber’s world tour — Microsoft’s multi-million dollar motion sensing camera, Kinect has hit shelves. Do you need it in your home theatre system?

Maybe. Much like Sony’s Move, Microsoft’s Kinect is a mixed bag. The tech is undeniably awesome, and you’re not going to believe some of the things it can do, but it is at the mercy of a lackluster launch lineup that doesn’t truly show exactly what its capable of. The main draw of Kinect is not what it does now, but what developers may be able to do with it in the future.

There’s really no way around this, Kinect is a beat of a machine. Coming in at just under a foot long and 7 inches tall, you’re likely to be taken back by the actual size of the unit. How easy Kinect is to install depends on just what model Xbox 360 you have. Got one of the fancy new slim models? It basically plugs right in with little hassle. If you’re an old timer like me with the original model however, things aren’t as easy. If you’re using a wireless network adapter on your console, you’re going to have to move it to the front of your console in order to make room for Kinect, which plugs into the back USB port of the console. It’s nothing major, but it does take up a front port of your console, and can mean trouble if you’re still using wired controllers.

Setting up Kinect once you’ve got it plugged in in incredibly easy. Power on the Xbox and follow the onscreen instructions. Just be ready, the unit will move up and down on its own to adjust its position ( note: Blast wasn’t aware of this when we got our Kinect in — hilarity ensued). 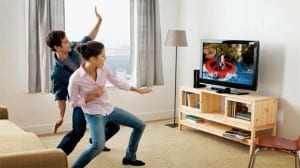 Microsoft promised a lot in the year and a half since they announced Kinect, and while most of the tech is here, some is missing or not working as well as it should. You’ll still be able to control the console without the use of a controller — which is admittedly impressive in most cases. Just wave to engage Kinect and a menu will pop up, hover your hand over what you’re looking for to select it. As of this writing, not all of the Xbox features were controllable via motion, but Microsoft assures us that they will be added shortly after launch. What i really liked was that unlike the Wii, where you could sit and fake many of the movements for games, Kinect almost forces you to be active. It is watching you after all.

Another way to control your system using Kinect is with your voice. As cool as this sounds, it’s very limited and can be quite annoying. Again, as of this writing, you can’t actually power on your system using voice commands, to engage the Xbox, you’ll have to power it on the old fashioned way. Once you actually have the option, you’ll be saying Xbox…a..lot. Say you want to play the disc in drive; you’ll need to say “Xbox” then “Kinect” and then “Play Disc.” Yes, it’s a bit long of a process to do something you could have done by pressing the A button, but it’s cool and friends will love the novelty of it. Much like the motion sensing, it could be more useful if its improved after launch.

One of Kinect’s coolest features is the new video chat. While the Xbox 360 has always had a video chat, going from the Xbox Live Vision camera to Kinect is like going from a betamax player to a Blu-ray on an HDTV screen. While the camera can get a bit distorted at times, the image quality is mostly superb and follows you around the room so you never have to worry about adjusting it.

Kinect’s launch lineup is obviously aimed at a certain consumer, the one that owns a Nintendo Wii and doesn’t quite get what’s been known as the Xbox experience until this date. Much of the launch titles are smaller, casual games  that you’d expect with a peripheral like this. The one everyone will be playing, Kinect Adventures comes packed in with the unit, and serves as a great welcome to the new technology. I especially had fun with the adventure course type mini games that had you running, jumping, ducking and dodging to collect Adventure coins. There’s also some cool social features in the game that allow you to share and edit treasures you find along the way.

Undoubtedly, the best game though of Kinect’s launch lineup is Dance Central from Harmonix. It’s best to think of the title as Rock Band, but you know…with dancing. You follow and try to mimic the moves of an on screen dancer as they perform dances to a variety of songs from a multitude of genres. The game does a great job correcting what you’re doing and easing those of us with two left feet into the fray. It’s fun, it’s active, it’s everything a Kinect title should be.

There are a number of launch titles for you to try, like the virtual pet-esque Kinectimals and the “Oh no, we’re not trying to be Wii Sports” clunker Kinect Sports, but there’s not really anything for core gamers to run out get, which while Microsoft  assures us that they are coming, will undoubtedly slow sales a bit.

The Blast Factor: Kinect is a neat peripheral with some cool tech. It may not revolutionize the gaming industry like Microsoft claims yet, but it shows some great promise. More than anything, we’re excited about what developers will do with it after they really get time to open up the peripheral’s engine and tinker around. How these developers build these experiences will determine whether Kinect is a failure or the next big thing in gaming.