NEW YORK — Hot Chelle Rae, a new band from Nashville, suddenly appeared in the music industry, out of nowhere. After releasing their debut album “Lovesick Electric” last year, they started touring in the United States. As they are actively working, their songs are often used on several TV shows. They are currently touring with Parachute. When they were about to perform in NYC, Blast got a chance to ask the Nashville boys, Ryan “RK” Follese (lead vocals, guitar), Nash Overstreet (lead guitar, vocals), Ian Keaggy (bass, vocals), and Jamie Follese (drums), what Hot Chelle Rae was all about. 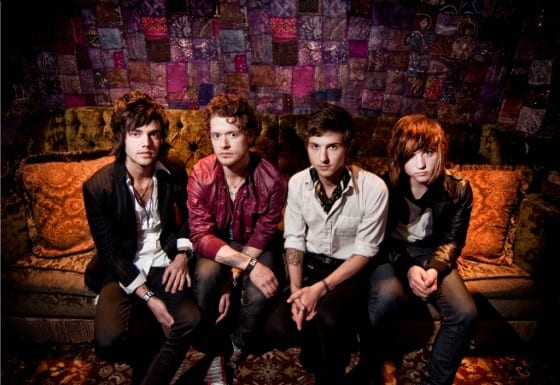 BLAST: What does “Hot Chelle Rae” mean? How did you guys come up with the band name?

NASH OVERSTREET: We came up with the band name from one of our fans on MySpace when we first started the group, who was a crazy insane stalker, and her name was “Chelle Rae,” and she looked at half of my pictures, and she gave us lots of drama and problems. And we kind of gave it to her and dedicated the name to her.

BLAST: So, you guys now appreciate her?

NO: She was a lot of entertainment, yeah. (Laughs)

RYAN FOLLESE: She was interesting.

BLAST: How did you guys get to know each other and form a band?

JAMIE FOLLESE: Well, me and RK are brothers, and Nash and Ian have been friends for about 15 years now and RK met Ryan met at a music store and,

JF: Sorry. (It was) the wrong version.

NO: Yeah, RK and I met at a music store and we started writing songs together, and Ian and I were hanging out. It had been for, you know, as long as we’ve been growing up. We were kind of like “Sally Rob two sides in” and it all clicked.

BLAST: Lead singer Ryan and drummer Jamie are real brothers. How is it like to be working with an actual family member in the same band?

RF: We were best friends before the band so. Having been in the band makes a much more enjoyable experience. If he wasn’t out on the road, I would miss him like crazy anyway so.

BLAST: Could you guys share about your lives before getting a major deal?

RF: Yeah, our lives consisted of holding up in a studio and recording nothing but a demo after a demo after a demo. But we played a lot of shows around the town as much as we could to totalize. But we just focused on writing songs, we were songwriters when forever being in the band.

NO: Yeah. We averaged about, I mean, before we got signed, we were writing a song every 1 or 2 days just whether it’s good or not. For the matter of good or bad, I think that was pretty good.

BLAST: Who were your biggest supporters in Nashville?

IAN KEAGGY: Definitely, I mean, we have families. They have supported us until today, from the beginning.

RF: Families are definitely number 1, I think. I think number 2 would be, there is a band in Nashville called “Enjoy the Zoo.” And they are probably our biggest supporters.

IK:: And our local radio stations.

BLAST: What was the main music influence on the band?

RF: We all have different influences. It’s anything from classic Beatles stuff to, you know, Prince, Michael Jackson, Queen, any, all the way to, you know, Radiohead, Metric,,,we like everything. Just kind of,,, anything. 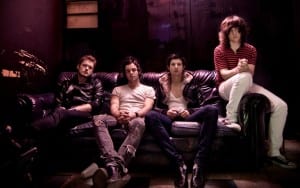 NO: Well, it’s different every single day. We can, you know, get together and start from a complete scratch and have nothing going or maybe RK will come in with a lyric idea or come in with a bass part. Today we were driving all the way to New York and I made up 2 song ideas on the computer. So, it’s really like “no rules.” It’s just, it could be completely random like it’s different every time.

RF: I could be something you say to us tonight. If you say something and sounds like a good song title, we could write a song from that.

BLAST: The band released a debut album “Lovesick Electric” in October last year. What was the main theme of the album?

RF: Well, I would say, like, as far as the themes go, I don’t even know if it’s called a theme but the title of the record, we knew it’s gonna be the name of our first album long before we had a record deal. We kind of shaped our sound and our songs around the idea of “Lovesick Electric”, so it kind of came this, um, you know, consistent reminder of what we wanted to be.

NO: I think we wanted to write great songs and have people to be able to relate to them, be touched by them, but at the same time, it’s a very “feel good” record as far as, like, there’s a lot of dance beat songs.

NO: And if it’s a slow song, hopefully you can move to it.

BLAST: What was the inspiration for the single “Bleed,” which is a great love song?

RF: Thank you! The inspiration of that song, as most ballads go, definitely a lady and a relationship that I was in, it was just, you know, something that we thought everybody, people could relate to. It’s, you know, people have tough time conveying their emotions. There’s no better way of writing it down sometimes. That’s exactly what the songs was to us.

BLAST: Our favorite song is “The Distance.” When you like someone, there might be some physical/mental distance between two people, which might cause something painful at times. That was the message that I got when listening to the song. Can you share what experiences that you had behind the song?

RF: Well, that song for us was, it was written, um, it’s kind of self-explanatory but it’s kind of taking new shapes as we’ve been playing it out and performing. We definitely wrote that song about being away from, you know, family, loved ones, we wrote it about, just you know, being on the road and, you know, kind of being lonely and missing the people you care about. And, you know, as time went on the lyric, it could for anyone, it could a loved one that has passed away or something like that. So It’s really kind of,

RF: Yeah, it’s universal and it’s really grown and even deeper meaning for us as we go.

NO: When we first wrote that, it was right when we had started touring, started leaving home, and started going on the road, and playing shows and not singing for family for a little while. And so, you know, kind of coming back in time, like, sing for friends and [we] tried [to keep] the relationships that you have to maintain or the distance. It’s really inspiring and that’s what we were feeling at that time.

BLAST: “The Hills” member, Stephanie Pratt was in the “I like to Dance” video. How did that happen?

RF: Ah, she liked the song! It was really natural. It happened very fast. And, we were originally going a lot to LA to shoot the video, and we heard that she was a fan and liked the song and it was a really easy thing to do. She showed up and we hung out and she was really like a rookie cool person.

BLAST: Did you guys just run into each other and she said that she wanted to be in the video?

RF: Ah, she, I think, she got to know when we were gonna be shooting it in LA and she heard the music and,

RF: Contacted the right people so, you know, she got a hold of us.

NO: We definitely had [followed] at times.

RF: I don’t watch the show!

JF: We are royal for a day.

BLAST: So you guys are watching the shows only when they are playing your songs.

RF: Usually somebody with a TV watches. I don’t have a TV that I go back and watch the stuff that’s on, so.