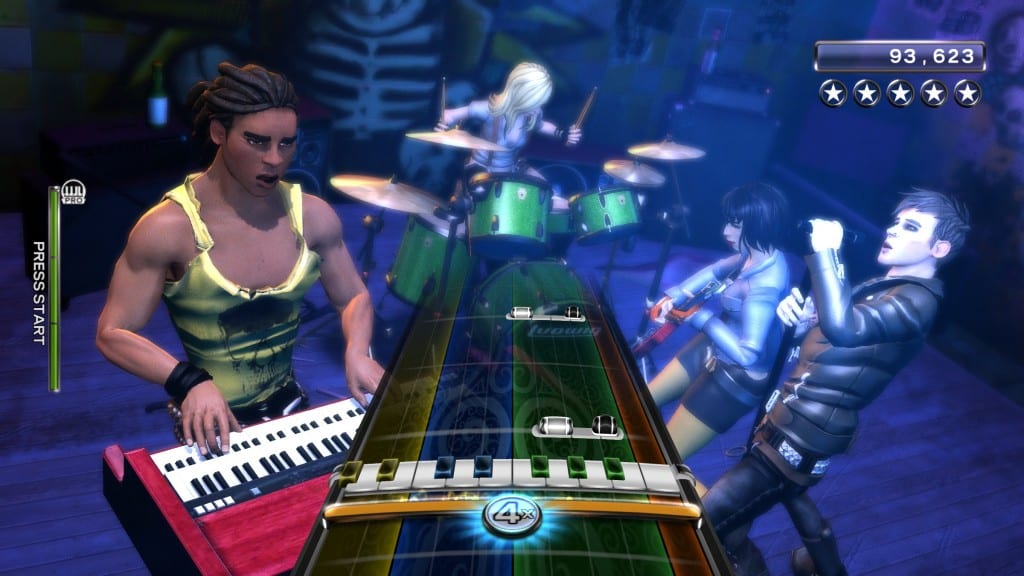 The music industry is filled with albums we’ll never forget. The Beatle’s Abbey Road defined a generation in transition.

Michael Jackson’s Thriller announced the arrival of a new standard. Nirvana’s Nevermind was the voice of a changing American landscape. Rock Band 3 is all of this, and more; much more.

Rock Band 3 is a phenomenal achievement that not only rejuvenates a dying genre, it redefines it. With a slew of tweaks and a set of cool new features, the newest Rock Band title bridges the gap between musical game and

music in general.  Simply put, Rock Band 3 proves that Harmonix are still the masters of the genre, even with a whole new set of challengers.

Rock Band 3 succeeds mainly on the strength of its own ambition of all else.  While most music games are okay with the idea of being just that – a game – Rock Band 3 aims a bit higher. With the game’s new Pro Mode, it becomes less about high scores with plastic peripherals and more about learning actual music notes. Rather than merely matching up the now expected colored boxes, Pro Mode tasks players with playing actual notes. Please note, the mode isn’t for everyone, in fact – some will hate, but it opens up a brand new, and much deeper experience for those already fluent, or looking to become so at their instrument of choice. Pro modes requires a new instrument – be it a drum-kit add-on or the insane pro-mode guitar complete with 102 buttons and the ability to use it as an actual guitar, but if you’re serious about music – you’re going to want to experience pro mode. Take that Prince.

The Rock Band experience has always been about vocals, guitar, bass and drums, but Rock Band 3 introduces players to a new addition to the band – the keyboard. Now, it may not seem as badass as the other choices, it is a great addition to the lineup, and tons of fun to play. There’s a ton of keyboard centric tracks here, and you can use the controller as an extra guitar for those songs that don’t make much use of the peripheral. While the keyboard feels just as rewarding as the drums or guitar, certain sections of certain songs can be downright challenging. While learning the ins and outs of the keyboards, odds are you’ll probably going to fail…a…lot. 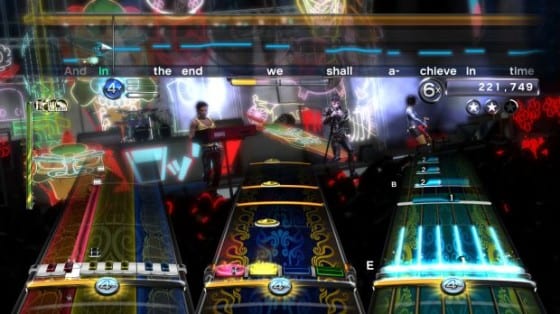 Speaking of the set list, I can honestly say that Rock Band 3’s is easily the best of the franchise. Come on, how can you down a game that features both The Power of Love by Huey Lewis and the News and Bohemian Rhapsody by Queen? There’s a pretty wide variety of content here, and though not everything is going to please everyone, you should be able to find enough to keep you busy – especially considering that all of the previous songs from Rock Band 1 and 2 are compatible with the third game. Seriously, that’s over 2000 songs you can choose from. With that much content, it can be pretty hard to navigate, but luckily Rock Band 3 comes packed with a whole new way to sort your tracks. Now, you can sort by everything from number of vocal parts (the game also supports the three part harmonies introduced in Beatle’s Rock Band), decade, genre and more.

Rock Band 3 is also much more accessible than its predecessors. In previous titles, you had to earn fans strictly by playing the career mode, here though, you can do that in just about any game mode (save for the Tutorial of course). Players can now drop in and drop out of gameplay as they wish, as well as being able to navigate menus for each player without disrupting the experience of others.

The Blast Factor: If you’re into music games – Rock Band 3 is an absolute must buy. If you’ve been burnt out on the genre and haven’t played on in a while, here’s the perfect chance to come back.  Rock Band 3 is a cultural achievement because it questions what a music game can be. Simply put, it doesn’t get much better than this.