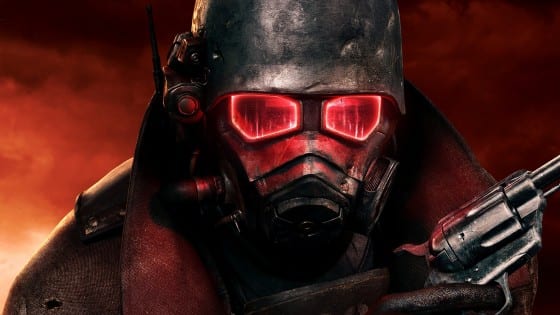 In the two years since its release, Bethesda has kept Fallout 3 relevant thanks to a steady stream of downloadable

content that expanded the game universe. Now however, it seems to be hurting the franchise more than anything else.

Fallout: New Vegas is a difficult beast to review. On the one hand, it adds to the experience first seen in Fallout 3 wonderfully, but on the other, that experience is nearly three years old.  The world is as massive and creative as ever, but playing through the latest chapter in the critically acclaimed franchise grows incredibly familiar and tiring all too quickly.

As you’d expect, New Vegas takes place in the year 2281 in a post apocalyptic Las Vegas, Nevada. Much like the Washington DC setting of Fallout 3, the map of New Vegas is incredibly large and impressive. In fact, the wasteland setting in New Vegas is easily one of the game’s best features. Actual landmarks like the Hoover Dam and the Helios Solar Energy Plant dot the landscape, which is tons of fun to explore. Playing through and exploring the world New Vegas presents is incredibly rewarding and the more you play, the more you’re sure to appreciate. Case in point – when you get to the actual Vegas area and see swing entertainers and the lights of the strip – it’s a truly awesome sight when you realize that up until this point you’ve been staring at a barren wasteland.

As a living  artificial world, Fallout 3 is nothing short of fascinating, but as an interactive experience, it’s a bit more thin. What worked so well before, often feels old hat here, and rather than feeling like you have complete control, it’s not uncommon to feel like the game is limiting what you can do.  Everything you’ve come to expect from the engine is here, just in a different form – while Fallout 3 began with you choosing your traits at birth, New Vegas does so after you regain consciousness after being brutally attacked and forced to dig your own grave.

While much of New Vegas’ gameplay is showing its age, the citizens of the wasteland are a different story altogether. In previous Fallout games, the factions were easy to navigate; one was good – one was bad – and so forth. Here, many of the factions come off as neutral forces, perpetuating ideas rather than stereotypical responses. This makes the game incredibly more fun to navigate, as you’ll have to really identify and choose which faction you want to align yourself with.

Each time I would get into the action of New Vegas, a technical glitch or troubling design choice halted any interest I had in the game. Several times, I had to restart my game as it caused the entire 360 to lock up. Furthermore, when the action starts to pick up, you’re left with a chugging framerate and some embarrassing textures. The worst aspect though by far is the game’s obscenely long load times. Even those wouldn’t be much of an issue if they didn’t happen so frequently. Going into a building? Load screen. Leaving a building? Load screen. It’s obviously annoying and has a tendency to take you out of the game, especially when your quest has you going through different buildings.

Those looking for more of a challenge with Fallout: New Vegas are pushed towards the new hardcore mode which severely amps up the difficulty and realism.  In Hardcore mode, stimpaks (the  game’s health system) heal over time rather than instantly, severe injuries require additional medical assistance and players must eat, drink and sleep to avoid starvation, dehydration and exhaustion. Yes, it’s as hard as it sounds, but it’s incredibly satisfying for dedicated Fallout players.

The Blast Factor: If Fallout: New Vegas were an expansion pack or DLC, it’d be instantly worth the money, but asking gamers to put down $60 for a title that adds almost nothing new, yet is chock full of technical issues is a bit much. Still, those who love The Fallout games are sure to find much to love in the Mojave Wasteland. Fallout: New Vegas isn’t the masterpiece many thought it would be, but fans are sure to enjoy one more romp with their pipboy.