Oliver Stone in many ways is America personified. At his best, his films are sharp, beautiful and earnest, with an unflinching view of the world and a sincere desire to change it.

At his worst, however, he’s shrill and overwrought, with an archaic view of right and wrong and overblown ego.

“Wall Street: Money Never Sleeps” is a well-meaning combination of his best and worst instincts; a half-baked jumble of ideas that might just have worked if not for a tacked-on focus group-approved ending.

I was encouraged by Stone’s idea — to recreate the Great Recession and Wall Street crash through the eyes of Gordon Gekko (Michael Douglas). To show what Gekko’s real-life counterparts have wrought and the misery it led to. Gekko, who himself is released from prison at the beginning of the film, is the same character, though this time he professes that time, not money is his main concern. Stone made up a wounded daughter (the luminescent Carey Mulligan) and her hotshot Wall Street analyst fiance Jake (Shia LaBeouf), who become enmeshed in Gekko’s inevitable mind games.

It’s a very different mood from the first film. The first was a game-changer in the way we thought about business and, contrary to Stone’s original intent, drove countless yuppies-in-training to the profession of assigning imaginary objects imaginary worth. It was incisive, minimalist and dark in just the right way.

There are charts! Lots of charts! And shots of the New York City skyline superimposed on charts! And then the camera twirls around the Empire State Building, superimposes another image of the corpse of Frank Langella and does it again! There are also lots of spiraling shots of bubbles, which is symbolism for… economic bubbles! 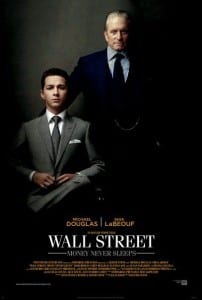 About 20 minutes into the film I found myself silently pleading, “Oliver, for God’s sake, sit down, and stop spinning the camera! I’m trying to watch your movie!” The dozens of montages literally triggered a migraine.

That’s not to say there isn’t a lot to like. Mulligan and LaBeouf are a real-life couple and have a wonderful chemistry, aided by the fact that Mulligan could probably be riveting acting the phone book. Josh Brolin, as Gekko’s rival, is dynamite — a man with a thin veneer of charm barely concealing a core of violence.

But these are just the people in Gekko’s orbit, but Gekko himself. I feel sad when I look at Michael Douglas. He still has capacity for perfect line delivery and a vicious sense of humor. But, to be blunt, the man has had so much plastic surgery, he literally can’t give an expression beyond snakelike surprise. Watching Douglas’ zombified corpse stumble around and attempt to move his paralyzed facial muscles is terrible, especially when compared to the virile animal who latched on to Charlie Sheen in the first film.

Speaking of Sheen, he does indeed have a cameo in “Money Never Sleeps.” In fact, he has the dubious honor of winning the “Most Awkward Cameo” Award, literally sitting there, with a 20-year-old aspiring actress on each arm, spouting about what he’s been up to since he sold that pesky Bluestar airline.

I have a hard time hating Oliver Stone. He gets it right just as much as he gets it wrong, and he has a wild, muckraking spirit I admire. But there’s too much in “Money Never Sleeps;” too much noise, too many montages, and too many ideas. And I won’t tell you the ending of the movie, but I think you can guess. Stone’s “Wall Street” worked because in the end the bad guy didn’t reform. He was loyal to his base instinct right to the bitter end. “Money Never Sleeps” allows for hope for all God’s creatures, even the ones who commit fraud against their own children. And that’s not the Gordon Gekko, or the Oliver Stone, I know and love.