Perfect Dark, the widely-praised and critically-acclaimed Nintendo 64 shooter from Rare Ltd. is coming to the Xbox Live Arcade in just a few weeks and we chatted with Nick Ferguson, a producer on the project to shed some light on the re-release.

Marc Normandin: The original Perfect Dark was a hit with gamers and critics alike when it released nearly 10 years ago on the Nintendo 64. First-person shooters have come a long way since then, as far as level-design and immersion goes: everyone has their own opinion on this, but let’s hear why you think the design is timeless enough to work for gamers today, in 2010.

Nick Ferguson: Perfect Dark plays very differently to recent shooters like Call of Duty and Halo. Whereas COD is a tightly scripted rollercoaster ride, Perfect Dark gives players a huge amount of freedom in how they choose to navigate the levels and complete mission objectives. The visuals may not be as spectacular, but the mission design is very smart and the system of level objectives that change based on difficulty has never been bettered.

Halo introduced the concept of limiting players to use of two highly focused weapons at a time and built great, strategic gameplay decisions around that. Perfect Dark works at the opposite end of the spectrum – players can start levels with access to an incredible toolkit of weapons and equipment, including a gun that can fire through walls (Farsight), a laptop that doubles up as both a machine gun and remote sentry post (Laptop Gun) and a weapon that turns enemy characters into allies (Psychosis Gun).

Like both Halo and Call of Duty, Perfect Dark on Xbox LIVE Arcade also has a deep and engrossing multiplayer mode that rolls all the great content from the single player into competitive online play!

MN: Obviously the Xbox 360 controller is a different beast than the N64 pad, and not just because it doesn’t resemble a Star Wars space fighter. How will the game control, two generations later? Has anything significant been added or subtracted from the controls in order to make this work (or work more effectively?)

NF: We’ve worked really hard to preserve the original "feel" of Perfect Dark on a twin-stick controller, and we’re really happy with the results. The original game made ingenious use of the N64 controller, but there was a lot of advanced functionality that required buttons to double-up for actions like cycling weapons backwards or even reloading. We’ve put those functions on their own buttons on Xbox 360.

We’ve adapted the feel of Perfect Dark onto the dual analog layout that modern gamers are familiar with so if you never played shooters on N64, you’ll be able to pick up and play Perfect Dark with ease. We’ve even included control schemes based on Halo ("Spartan") and Call of Duty ("Duty Calls") so players familiar with those titles can dive right in. Having said all that, if you played Perfect Dark on N64 for hours and hours back in the day I think you’ll find the new controls will fit you like a glove.

MN: One of the things that kept people playing Perfect Dark for countless hours, even before online play, were the various game modes. There was a single-player campaign, a co-op campaign, a wealth of multiplayer modes and options, a shooting gallery, as well as challenge levels that were worthy of their name. Is all of this being retained? Has it been modified? Has anything else been added to this for the XBLA release?

NF: Everything players remember from the original game has been retained in Perfect Dark for XBLA. This includes the Firing Range and Device Training in the Carrington Institute to the use of bots (Simulants) in multiplayer. The biggest change that drags Perfect Dark roaring into 2010 is the fact we’ve plumbed LIVE functionality into every aspect of the game — from Co-op and Counter-Op modes which can be played online, to the Combat Simulator multiplayer modes which now support 8 players over Xbox LIVE.

Players who remember the glory days of couch multiplayer will be pleased to hear we’re retained all the split-screen game functionality from the original, too! In fact, players can even compete via split screen over Xbox LIVE. On top of LIVE multiplayer, we’ve added all the things players have come to expect from their XBLA games including Leaderboards, Achievements and a ton of unlockable content including Avatar Awards and an exclusive free Premium Theme. 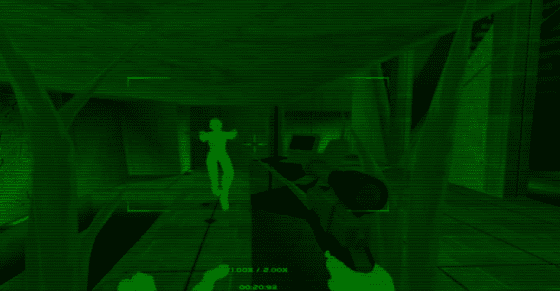 MN: What tech benefits will we see by switching from our dusty cartridge to a download-title in 2010? The framerate in the original, for instance, was notoriously poor in multiplayer.

NF: Xbox 360 lets us run Perfect Dark at full 1080p HD resolutions at a solid 60 frames per second. The game has never looked better, and that silky smooth framerate also applies to the multiplayer mode — even when we’re running in 4-player split screen. We’ve updated every texture and remodeled all the characters and weapons to make them look great in HD. Locations have all had a lick of paint, from new skyboxes to updated geometry and level objects. Pipes that used to be flat polygons on N64 are now fully-rounded 3D objects. Finally, the game makes great use of 5.1 surround sound and original master recordings have been used to update the soundtrack without compression!

MN: Perfect Dark is known for its weaponry. Confession time: what is your favorite gun, and why? Favorite secondary function?

NF: love the Laptop Gun, not just because of the awesome sentry gun secondary function but because of the way it kicks off the action on Carrington Villa’s Perfect Agent difficulty setting. If you don’t know what I’m talking about, I won’t spoil the surprise! A close second would be the Psychosis Gun. A weapon that turns your enemies into allies – what more can you possibly want!?

MN: Finally, not everyone has played Perfect Dark, so why don’t you tell the readers why they need to own this updated classic. The floor is yours.

NF: Perfect Dark is an incredible game that just got the tune-up of the decade. Some classic games don’t age well, and even when they do it can be hard to look past blurry graphics, outdated controls and a sluggish framerate without a healthy dose of nostalgia for the original release. We’re incredibly proud and privileged to be bringing a top-notch update of a legendary game design — one that was years ahead of its time – to Xbox LIVE Arcade in 2010 where a new generation of players will get to discover its unique charms all over again.