Video games don’t just affect other video games.‚  While some politicians may say video games contribute to violence, there are other people outside of the video game world enjoying the repercussions of a booming industry. StlOcarina.com for example, a website devoted to crafting the woodwind instrument used in famous games like The Legend of Zelda, the ocarina.

Blast got a chance to chat with one of the performers (testers) about the newly designed Ocarinas that range from exact replicas of in-game instruments fans of the Zelda series surely get excited about, to well-crafted stand-alone musical instruments.‚  Not only are the Ocarinas developed at the website polished and perfected as instruments, but they also serve as memorabilia to an iconic franchise in the video game industry.‚  Meet Heather Scott.

BLAST: What is your background with music?‚  First instrument?‚  Favorite instrument?

Heather Scott: My background in music goes back to the womb!‚  My father was a grade school and middle school band director, so I have been going to his concerts since I was born.‚  All three of my older siblings played in the band in school so I always knew that I wanted to join the band as well.‚  Once old enough to join my father’s band I chose my first instrument, the flute!‚  I continue to play flute now and have a Bachelor’s degree in music performance from Illinois State University.‚  Currently I am working on my Master’s in flute performance from Webster University in St. Louis.‚  Besides the flute and ocarina, which I LOVE, my other favorite instrument (although I regretfully do not play) is the cello.

BLAST: What is your background with video games?‚  First system?‚  Favorite game?

H.S.I have always found video games to be a great way to relax and unwind after a busy day.‚  The first system I ever owned was a Nintendo.‚  The year Nintendo came out my siblings and I pooled our allowances to buy one.‚  We played ALL the time.‚  Later we got a Game Boy for Christmas.‚  I played that all the time because my favorite game was Super Mario Land 2: 6 Golden Coins.

BLAST: Are you a big fan of the Zelda series?

H.S. Yes.‚  The Legend of Zelda was one of the first video games I ever played, so I think I will always be a fan of the series.‚  I love how the series involves a mixture of action and puzzle solving skills.

BLAST: Has the popularity of the Zelda themed Ocarina helped business?

H.S. Definitely!‚  Thanks to the Ocarina of Time, many gamers have become interested in the instrument.‚  They are always pleased to discover that it is a real instrument after all!‚  Our Zelda ocarina is one of our best sellers.‚  We just came out with a new Zelda ocarina that features the Triforce as well as new Rupee ocarinas! 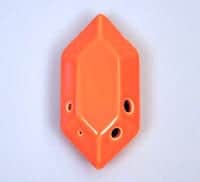 BLAST: What kind of tests do you run on the Ocarina’s you’re producing?

H.S. After the ocarina has been carefully designed, we run a series of tests to make sure it looks and sounds good.‚  We test that it’s in tune first.‚  That’s really important! Then we have testers play on the ocarina for a period of time to discover any inconsistencies.‚  Only when we feel the ocarina is truly ready do we put it on the market.

BLAST: Have there been any large orders of Ocarina’s, or any strange orders from super Zelda fans?

H.S. We have partnered with anime, cosplay, and music shops all over the world to bring the ocarinas to a larger audience.‚  These shops tend to order a lot of ocarinas from us!

BLAST: Have you ever thought about making other video game themed instruments?

H.S. We’re kicking around a few ideas”¦.Keep an eye on our website!

BLAST: What do you see for the future of stlocarina.com?

H.S. I hope to see the company continue to grow and spread the art of ocarina playing!‚  We have come so far in such a short amount of time!‚  We are all dedicated to education, so when you buy an ocarina from us you are also gaining a support system to help you learn how to play the ocarina.‚  We are also excited about our ocarina trio and are hoping to be touring very soon.‚  This group aspires to promote the ocarina as well as world music.

BLAST: What kind of competition do you have, if any?

H.S. This year we will be holding our second annual International Ocarina Star Search Competition.‚  We had a lot of great entries last year and hope to have even more this year.‚  Contestants play one piece, chosen by STL, and one piece of their choice.‚  The winners get lots of great prizes including, ocarinas and the opportunity to perform and even record with us!

BLAST: What are you playing right now?

H.S. Currently I am working on a HEAP of Celtic music that the STL Ocarina Trio will be performing very soon.‚  I am also working on a few pieces for the triple ocarina including a piece called Farewell to Ireland.‚  I just finished recording Gerudo Valley from Ocarina of Time which can be heard on my YouTube channel.

BLAST: Are there any new instruments you are working on?

H.S. At the moment, we’re working on an exciting new model of plastic ocarina which should be available in October.‚  The great thing about this ocarina is that it’ll have a large range of notes and yet be very durable and affordable.

BLAST: What do you think is the reason for the ocarina’s popularity as an instrument?‚  Easy to play?‚  Easy to learn?

H.S. I think a large portion of the ocarina community is drawn to the instrument through the Zelda series.‚  However, those customers that begin by ordering a Zelda ocarina inevitably come back and order more and more ocarinas.‚  Collecting them is an enjoyment in itself.‚  Ocarinas have a very unique and beautiful sound that is different from any other instrument.‚  It is also fairly easy to learn.‚  Anyone could pick one up and be playing a song within minutes.‚  Ocarinas are great because you don’t have to know anything about music to get started.‚  You can also play lots of different types of music on ocarinas including classical, folk songs, Celtic, video game or movie music, and music from virtually any culture!‚  They also come in many different varieties, shapes, sizes and colors so there is always more than one perfect ocarina out there for everyone!

Besides the Legend of Zelda, I also enjoy playing music from many different video games as well as anime music.‚  I have a youtube channel where I record some of my favorites.‚  Please visit my Youtube page to check it out.

Byline: Heather is a flutist currently earning her master’s degree in flute performance. She is also a masterful performer of the ocarina. The pocket-sized wind instrument with ancient roots is gaining popularity thanks to its connection with the video game, “The Legend of Zelda: Ocarina of Time.” Heather, 23 and recently engaged, is a native of St. Louis. Her father was a band teacher and encouraged her interest in music. Her hobbies include swimming, kneeboarding and water skiing and playing the flute and ocarina.