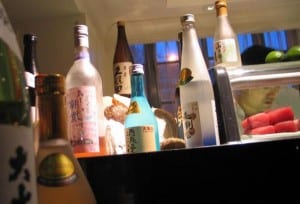 Skip down to the corner of Commonwealth Avenue and Massachusetts Avenue and cool off with some of the best and most refreshing cocktails and sashimi plates in the city.

Uni Sashimi Bar and Lounge may be extremely cozy (read: tiny) but it is definitely the hippest sushi spot in Beantown. Executive chef and co-owner Ken Oringer, also of the innovative South End tapas restaurant Toro, has let go of all inhibition and explored new territory when it comes to sashimi, seafood and ambiance. In addition, the service was impeccable from the hostess, to both our waitresses, to the owners themselves. The staff was not only knowledgeable regarding every single dish they placed on the sushi bar, but they were friendly and extremely attentive.

Uni is located right inside Clio, the restaurant at the Hotel Eliot on Commonwealth Avenue. Clio serves up inventive French-American cuisine, and Uni, directly off the hotel’s lobby, compliments it nicely. Sashimi chef and co-owner Chris Chung was on fire the night a friend and I stopped by for some pleasantly refreshing drinks and fusion sashimi that made my mouth water at the very first glance of the menu descriptions.

Our first course, Hirame (fluke for any sushi-neophytes out there) with toasted garlic was delicious. The fish was fresh and light, and the citrus flavors played nicely against the wonderfully strong and aromatic garlic which is a staple in many of the dishes (as it should be because it added so many levels of flavor to the different fish).

The seaweed salad here is inventive, if not directly up my alley. Unlike the standard bright electric green, uniformly sized strands of seaweed that appear in every single salad I have ordered in this fair city, the seaweed salad at Uni has a variety of different sizes, colors and textures of the ocean delicacy. It has a slightly bitter flavor and is perfect for anyone seeking to try a new take on this Japanese restaurant staple. It features four seaweeds with soy sauce, brown rice vinegar and tuna flakes adding a strong salty oceanic flavor.

Something that was truly another standout was the Rock Shrimp Tempura seasoned with spicy red pepper aioli and Korean pepper threads. It was delicious and perfectly fried. It was popcorn shrimp on steroids (the good kind, whatever they might be). These bite-sized morsels were definitely not for the faint of heart, packing a very spicy kick. They’re also not for anyone on a diet.

Another great standout in my mind was the octopus, a sashimi fish rarely eaten by the unadventurous sushi enthusiast. The way‚  Chung prepared the delicacy, it was mild and delicious. The octopus, sliced quarter-thin, had great texture and was drizzled with wonderful chili oil (and of course that toasted garlic we can’t get enough of).

One of my absolute favorite dishes was surprisingly simple, decadent and completely and utterly refreshing on that exceptionally hot and humid July day: the spicy lobster salad. It was phenomenal. It boasted papaya, perfect lobster meat and that wondrous toasted garlic again. It was heavenly and the perfect thing to cool off on a hot summer’s night.

“The idea for this salad original is derived from the traditional Thai salad Som Tum,” Chung said. He believes that the freshness of the fish is the most important thing.

“My cooking method is to use traditional flavors and techniques and add in a touch of French cooking technique,” he said.

Some ingredients Chris often utilizes behind the sashimi bar at Uni include soy sauce, yuzu, and fleur de sel. He also feels that using seasonal vegetables and fish will result in the best meal possible.

Fellow dancer and sushi-lover Vanessa and I were seated on the edge of the sushi bar and couldn’t help but shimmy and tap our feet to the restaurant’s soundtrack. The music was a fun variety including some hip hop, pop and Latin hits, including a personal favorite, Juanes’ “A Dios Le Pido.” When Oringer stopped by to say hello to us, he let us know his wife had created the playlist and I had to commend her taste, in both music and men (Ken is the epitome of surfer-cute with medium-length brown hair, a five o’clock shadow and a sweet demeanor).

Of course, I can’t forget about the fun summer cocktails – the perfect pick me up, or relax me down drinks – on this exceptionally humid day. The Ginko-Bai artfully showcased plum-infused and Asian pear sake with a mountain peach and sugared rim. It was delicious, light and not too strong which is a must for any summer alcoholic beverage.

We ended the meal with two desserts, the standout being the Strawberry Fields dessert (can anyone say Strawberry Fields forever, and hopefully ever and ever?!). This dish of fresh sliced strawberries and wonderfully light and delicious cocoa “soil” and coconut sorbet with rose dew was divine. The rose dew used is perfection because I have never been so excited about a dessert, ever. Usually, I’m disappointed and left too full with an unsatisfied sweet-tooth.

The Frozen Capsule of Bing Cherry and Amaretto Toffee packed a fun surprise with the toffee spilling luxuriously out of the center. It was pretty good, but not even a close second to the Strawberry Fields dream-dessert status.

This is a great date spot; it’s intimate and fun with inventive dishes that are thought-provoking as well as palate-enticing. Creativity is often overlooked in Japanese cuisine so it’s great to see a Boston restaurant embrace innovation and create new dishes using the freshest products and ingredients we may not typically expect to pop up in our sashimi.

And, Uni is partaking in Restaurant Week for those on a budget, happening now. Their first course offerings include a spicy shrimp salad with cucumber, mango, lime and chili or yellowfin tuna with sweet onions, sesame, seaweed and pickled mung bean (so much yummier than it sounds!). Their entree choices feature a slow poached Scottish salmon prepared with yuzu salsa and served with an organic rice ball, kobe short rib with a side of spicy cabbage salad and chirashi with the chef’s choice of exotic sashimi fish and various vegetables.

So if your feeling a little too hot under the collar, skip down to the corner of Commonwealth Avenue and Massachusetts Avenue and cool off with some of the best and most refreshing cocktails and sashimi plates in the city.