Video games and movies are both quite enjoyable when separate.

However, like eating sandwiches and sex, the end result is rarely good when the two are combined.

With this in mind, there is no surprise that I was a bit skeptical when I heard there was going to be a new Ghostbusters game to be released for the Xbox 360.‚  Yet, upon hearing about how this game was going to have a good distributor and all of the same main actors and writers from the original movies on board with the project, my skepticism quickly turned into cautious optimism for the title. 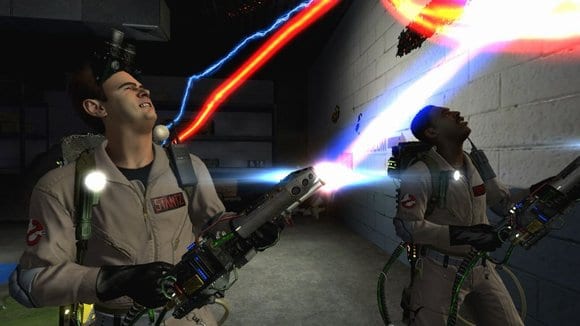 Ghostbusters takes place in Manhattan just two years after the events in the movie Ghostbusters 2.‚  With all of the main characters present, the stage is set perfectly for players to seamlessly jump into the post-movie action.‚  When starting a new game, players take control of a recently hired Ghostbuster team member.‚  While some of the members have a hard time trusting you at first, you quickly become a major cog for the team.

After completing a quick tutorial, your rookie character jumps right into the action when a Manhattan hotel calls to complain about some paranormal activity within its walls.‚  When the team arrives, it is revealed that your old friend Slimer is wreaking havoc in the hotel.‚  Following the clues and slime piles left behind, the team is locked in an adventure that expands far beyond the presence of Slimer and the premises of the hotel.

The main Ghostbusting function within the gameplay is utilizing the “Sap ’em, Cap ’em, Trap ’em” technique.‚  Resembling the actions from the movies, your character must drain a targeted ghost’s energy (AKA sapping), prevent the ghost from running away (AKA capping) and put the ghost in one of the high-tech, Pokeball-like trapping devices (AKA”¦ well, you get the idea).

Sapping involves some eye-hand coordination, as this part of the technique requires some quick and accurate shooting.‚  Upon finding a powerful ghost (some small ghosts can be eliminated without the use of the entire three step technique) players must follow their ghastly enemy manually with their sapping ray by pressing the RT button.‚  Once you have sapped enough energy out of the ghost (as indicated by a small meter located on or near your target), it is time to trap it.‚  If your proton pack hasn’t done so automatically, press the left bumper to activate your capture stream.‚  When this ray is being used, players will be able to crash the ghost into the ground and walls in order to further weaken and eventually daze the enemy.‚  Once that is accomplished, players should throw out a trap and slowly drag the phantasm into it.

The control scheme is pretty much as difficult as it sounds.‚  Even with the very helpful tutorial portion of the campaign, it seems like most of the controls are not quite as intuitive as many gamers would like (tracking ghosts and even sprinting seems like a bit of a chore). ‚ With this in mind, it is no surprise that combat can be a little longwinded and repetitive. ‚ Expect to be methodically learning and relearning the different processes, especially the Sap “Ëœem, Cap “Ëœem and Trap “Ëœem technique, for a slightly longer period than most games.‚  If you are having much more trouble than you would like, consider customizing your control scheme through the in-game settings menu to accommodate your style of play. 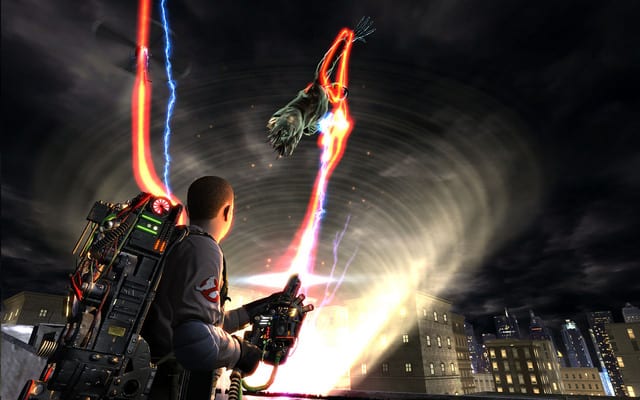 What is really cool about this game, especially to fans of the films, is that the game stays true to its roots.‚  From the actors to the original music from the motion pictures, Ghostbusters really impresses with its attention to detail and continuity.‚  With the game being written by the original writers, comedy legends Dan Aykroyd and Harold Ramis, it is no surprise that the dialogue in Ghostbusters is full of wit and sarcasm.

The voice acting is not without its flaws, however.‚  Though Ghostbusters’ cast has returned in full force, there seemed to be some volume issues with the in-game dialogue.‚  While the sound effects would come through crystal clear, I would have a hard time hearing some of the characters’ voices, especially Billy Murray’s character, Dr. Peter Venkman, whether it was due to overpowering background music or action.‚  This is especially unfortunate because it really leaves the player out of the loop when it comes to hearing the surely priceless comedic value hidden within the inter-character conversations.‚  This problem could surely be solved within the in-game the audio settings, but it would have been nice if the default settings worked a little more effectively.

The attention to detail in Ghostbusters doesn’t end at the writing; the game is filled with little visual features that will make even the most critical gamer pleasantly surprised.‚  The first thing that stands out is the highly functional proton pack located on the back of all of the Ghostbusters.‚  These proton packs are probably as intricately designed as any piece of equipment I’ve seen in recent games.‚  They are covered in bright, flashing lights with dark, well-textured crevasses and curves.‚  When cooling down the proton pack after a good Sap “Ëœem, Cap “Ëœem and Trap “Ëœem session, flurries of steam are emitted beautifully from the lower part of the pack as the energy rods are extended out of the pack and exposed to the air.

Beyond its visual beauty, the detail in the proton pack also comes in handy because it serves as a replacement to a traditional HUD.‚  So, even though the lights make the pack look pretty, they also have a real purpose to them as well.‚  Complete with health and energy meters, players will have no trouble appreciating all of the intricate and useful doodads and wiz bangs attached to the always-trusty proton pack.

The impressive visuals continue throughout the level designs.‚  Each level’s environment is colorful and full of outstanding shading.‚  A player’s surroundings are almost completely interactive, making even the simple act of walking through the game a pleasing experience.‚  Furthermore, a player can use their capture stream to change the environment around them.‚  A piece of furniture in the way?‚  Use your stream to pick up the annoying chair or table and toss it to the side.‚  Players will also quickly notice that the capture and sapping streams will tear holes in walls and even destroy some items, leading to some good clean fun involving scribing words and messages on ceilings. 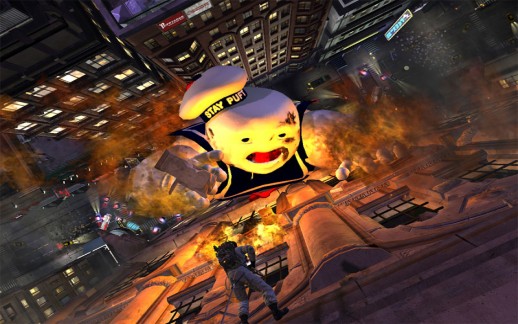 Another fun feature in the game involves the customizing and upgrading of your equipment.‚  By capturing ghosts and finding hidden treasures, your character will acquire money throughout the game.‚  This expendable cash can be used to buy more powerful gear for a stronger, more effective ghost wrangling experience.‚  Weapon improvements are always loads of fun, however it seemed like one could max out the upgrades without having to beat the entire game.‚  Perhaps a character leveling system could have been utilized to fix this problem.

Blast Factor: Ghostbusters is not a flawless game.‚  However, it is far from a worthless game, as well.‚  Ghostbusters is one of those rare games where all of the main aspects of the game are solid but, for the most part, are somewhat removed from spectacular.‚  While that may not be great news for most games, it is really the best-case scenario for a movie-based game such as this.‚  Ghostbusters stays true to its roots and is visually impressive, making it at least a solid rental for the casual gamer and close to a “must have” for the serious Ghostbuster fan.

So, if you are looking for a movie-based video game that actually worth playing, who you gonna call?‚  Ghostbusters.

Ghostbusters: The Video Game is available for Xbox 360 and Playstation 3 for $59.99