Bit.Trip is a series of WiiWare titles developed by Gaijin Games, the first of which, BEAT, released back in March. It’s one of the top titles on the WiiWare service, so when we heard that they were working on a sequel (actually, far more sequels than that, as you will see) we were understandably excited. Here to talk about that sequel today is Chris Osborn, the programmer at Gaijin Games and one of the minds behind Bit.Trip CORE.

BLAST: To start, let’s get a bit of background on Gaijin Games. What would you like the people to know?

Chris Osborn: Gaijin Games is your friend! The current incarnation of this company began in September 2008: just three guys (Alex, Mike, and Chris) and one dream (BIT.TRIP). We all had a common interest in creative freedom and the emerging downloadable market on the consoles seemed to be the perfect place to bust out some tight and supremely rad little games. Oh, and we’re all gamers, and we are truly in this industry for the love, not the money. We also pride ourselves in being as “green” as a small game studio can be, and that value helps drive day-to-day decisions. As mentioned, we’re also quite friendly and absolutely love meeting fans. You can follow us on‚ Facebook,‚ Twitter, and our‚ blog.

BLAST: Where did the idea for the Bit.Trip series come from? Was it always meant to sport this retro style?

CO: BIT.TRIP began as a concept quite a while ago actually. Born over a lunch at the famous‚ Saturn vegetarian diner if I remember correctly. The idea was simple: make a sweet rhythm game using 8-bit/chiptune music as the soundtrack. The Atari look-and-feel followed naturally from there. So yeah, it was retro from the get-go. Once we started the project, we planned out the whole series and storyline. So expect a nice, continuous story arc from beginning to end, albeit very open to interpretation! However, CommanderVideo initially wasn’t the of star of show. He was meant as a minor character planned for one of the later BIT.TRIP games. But once we saw his concept art, we knew he was destined to rock out the whole series! 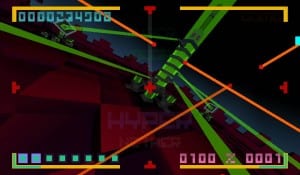 BLAST: How about the inspiration for CORE, specifically? Bit.Trip BEAT looked like Pong with just as much emphasis on “Trip” as “Bit”, so what prompted the creation of this new entry?

CO: CORE follows BEAT in evolution: both for CommanderVideo and gameplay. BEAT looked back to one of the earliest game genres: spinner/paddle games, as well as forward to modern, rhythm games like Rez. As game consoles evolved, so did their controllers with the introduction of digital button-based designs. Likewise, we go from BEAT’s smooth, analog control to CORE’s rigid, on/off, mechanical vibe. Visually, we have taken the same trippy, old-school style from BEAT and refined it in subtle ways. New color schemes, cleaner HUD design, etc. You’ll also see a lot of machine-influenced art in CORE that echoes this digital vibe. But don’t worry, fans of the TRIP in BIT.TRIP will feel right at home in CORE!

BLAST: In BEAT, you use the motion control functions of the Wii Remote to move your paddle back and forth, which I think gave it an added old-school vibe. How do you control CORE?

CO: CORE uses the Wii Remote held sideways, like an old NES controller. However, this time around you are using the +Control Pad and the 2 Button for control. Pressing the +Control Pad in any of the four directions will aim the core’s beam, and then hitting the 2 Button will activate the beam, blasting away any beats in its path. So while playing you essentially are controlling the “note” with your left hand, and playing “rhythm” with your right. This aspect brings CORE much closer in gameplay style to traditional rhythm/music games, in contrast to BEAT which is bit closer to a shooter. We also added a screen-clearing BOMB that can be activated with the 1 Button, just in case you get overwhelmed. Still, there is a very subtle use of the motion control, see if you can find it! 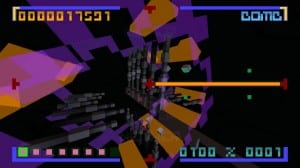 BLAST: How many titles do you plan on releasing under the Bit.Trip name? Is there a chance they will be bundled together at retail when all is said and done on WiiWare?

CO: BIT.TRIP is a six game series. Expect them all to carry the same retro flair, but trust me, we’ll be mixing up the gameplay and visual style just enough to keep you interested from start to finish. If only I could leak what’s happening with Game 3! Suffice to say we are VERY excited about the magic going around the office right now. Once we finish off the WiiWare versions, I’m sure we’ll discuss a retail version since it makes perfect sense. But no, we don’t have any concrete plans as of right now.

BLAST: Will CORE support any features outside of standard gameplay, such as online leaderboards?

CO: CORE is similar in scope to BEAT: three (very) challenging levels, a high scores screen, and the credits! No online leaderboards this time around. However, we are investigating that feature for future releases. If we ever do, we want to make sure it’s done right, and that it will meet all the expectation players have for it. Just like BEAT, expect Europe and Japan releases coming up soon too! We can’t wait for the North American release on Monday, and we hope all of you love our game just as much as we do! Enjoy 🙂

Bit.Trip CORE releases Monday exclusively on the WiiWare service. We will have a review for you shortly after. Thanks to Chris Osborn and Gaijin for taking our questions!