When Blast talked to Craig Deering of Evil Iguana Productions back in November, he was still riding the wave from the EIP “The Dark Knight“ spoof that at that point had earned them over 6,000,000 hits on YouTube and made them instant Internet sensations.

Then, their “Twilight“ trailer spoof, which was the lesser-known cousin of the Batman spoof, earned them a hearty 2,000,000 YouTube hits. In the seven months that have passed since then, Deering and the rest of the Evil Iguana crew have become enveloped by Twi-Hards, and earned themselves free front-row tickets from MTV to the MTV Movie Awards Sunday night.

Bailey “NoMoreMarbles“ Gauthier, beloved “Twilight” YouTube personality and friends of Deering and EIP, received passes to be seat fillers at the Movie Awards from her contact at MTV. She was allowed to bring some “friends” and chose to invite Deering and EIP members Joe Korbel and Tom Latvys. “Of course we weren’t going to say no to that” Deering said. 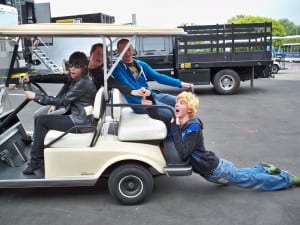 Though the foursome were originally supposed to be seat fillers for the cast of “Twilight” the company behind filling seats said it would be nearly impossible to guarantee those seats. MTV pulled a few more strings and got them seats at the front row of the pit, “10 feet from everyone” Deering said.

They didn’t get to meet any of the cast “" or make a swipe at Megan Fox’s behind like Deering had joked on his Facebook “" but while they were in L.A. they did get a chance to talk to Christian Serratos who plays Angela in the “Twilight” films.

Deering, who is petitioning Summit to play the role of Riley in next year’s “Eclipse” said he will get a chance to meet the cast of “Twilight” (sans Kristen Stewart and Robert Pattinson) July 4 at a Make-A-Wish fundraiser in Portland, Oreg. and during Twi-Con in Dallas July 30 to August 4.

When the “Twilight” YouTube spoof originally debuted, Deering and the EIP gang never had any plans to get involved in the Twilight fan culture, but he said he is glad things have changed.

“I’m loving it” Deering said. “I didn’t think I was going to be a part of this Twilight universe thing, but making that spoof was one of the best ideas we had to do.”

Deering told Blast EIP will be making a 15 to 20 minute long “Twilight” scene they will debut at Twi-Con. He also said they are very strongly considering making a “New Moon” trailer spoof, but need some more scenes than the one minute trailer to make an adequately funny spoof. “We might as well” he said.

Though EIP has never worked with or been approached by MTV before, they had the opportunity to make a video before the Movie Awards that MTV put on their Movies Blog site and MTV asked them to continue sending them their videos. Deering said he will be sending MTV the “Eclipse” YouTube petition video in the hopes MTV will get behind their campaign.

Blast previously reported on the “showdown” between “Twilight” screenwriter Melissa Rosenbaum’s choice for Riley “" Channing Tatum “" and fan pick Deering. Tatum was also at the MTV Movie Awards, and Deering said he was apparently sitting about 15 feet away from him. 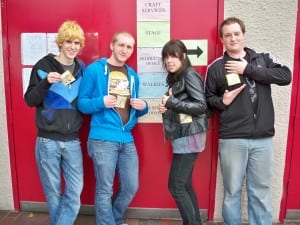 “I said to Bailey, “ËœHold me back, I’m going to jump him'” Deering told Blast with a laugh. “”ËœI’m going to challenge him to a dance off.'”

Deering said that originally his idea to play Riley in “Eclipse” was a just a joke.

“The fans we were talking to thought we were serious, and they started spreading the word around, and it just got bigger and bigger” he said. “Now we’re going full force and trying to get into this movie.”

EIP got to meet up with T180, a Disney-owned studio that makes a lot of spoofs and parodies, while they were in LA. Turns out not only Blast, MTV and Twi-Hards have had their eyes on Evil Iguana, but Disney has as well. The people Deering, Korbel and Latvys spoke to said they had been planning on reaching out to EIP previous to the Movie Awards experience, and talked about making some spoofs together in the future.

Deering also shed some light for us on the Bruno/Eminem fiasco at the Movie Awards. “I personally think it was scripted because I went back and I watched it to hear everything and [Eminem] was miced the whole time” Deering said. “I wouldn’t know why they would mic someone if it wasn’t. It was very chaotic in the actual awards ceremony when it happened.”

Korbel and Latvys both thought the incident was unscripted, Deering said. 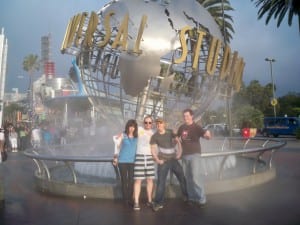 Deering not-so-subtly implied in his post-Movie Awards blog for MTV that he would be interested in participating in more MTV events. With attention from big shots like MTV and Disney, it looks like Evil Iguana is ready to dominate more than just YouTube and “Twilight.”

Fans can check the guys out when they are featured at Twi-Con in Dallas July 30 through August 4. Keep an eye on Blast for up-to-date news on Evil Iguana Productions.