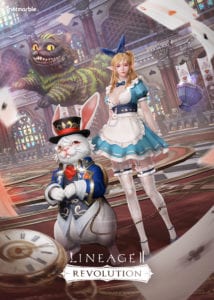 The Heroes of Aden have an all-new threat to face and conquer in Wonderland as Netmarble Corp. issues its latest update that brings the mad world of the Alice in Wonderland novel to the popular mobile massive multiplayer online role-playing game (MMORPG), Lineage 2: Revolution. Thanks to the mistake of Varot the curious cat, players can step into Wonderland and join forces with Alice on a quest to save her world with the new ‘War in Wonderland’ update.

Inspired by the classic Alice in Wonderland novel, Lineage 2: Revolution’s War in Wonderland update adds a special Temporal Rift Dungeon – Alice’s Dream – that lets players enter the world of Wonderland at Level 10 where they will encounter weird animals, card soldiers, and the Cheshire Cat as the final boss. An all-new Adena Vault – Queen’s Treasure Chest – will be available for entry at Level 35 where expert players can conquer Card captains and soldiers for rewards.

Other updates to Lineage 2 Revolution’s War in Wonderland event include:

Lineage 2: Revolution is a groundbreaking MMORPG bringing top-quality visuals, a massive open-world, and large-scale PvP to mobile devices. Powered by the Unreal Engine, the game features stunning visuals, large-scale open-world combat where up to 200 players can battle in real-time on a single screen – all in a gorgeous, fully-featured, persistent world MMORPG that can be enjoyed alongside millions around the world, all within the palm of your hands.