We’ve all seen them. Disclaimers networks and newspapers offer when a pundit or editorial writer weighs in on a topic or issue: “the opinions expressed herein do not necessarily reflect those of the network…” etc. etc. 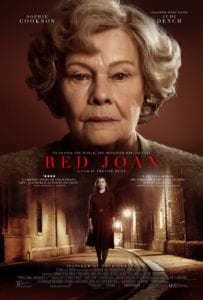 Such seems to be the disposition of the makers of Red Joan, a film based on the life of a British mole, who passed atomic secrets to the Soviet Union during and after World War II. The espionage this female spy conducted undoubtedly was treason, but the producers of Red Joan attempt to walk a fine line. They seem hesitant to call the acts of treachery what they were and want us to believe there was nuance to helping Stalin achieve the bomb.

It’s this muddled conviction that defines the dramatic statement of the film, and, in my opinion, holds it back.

This is not to say Red Joan is a poor movie: it is not. It’s part spy film—the more muted John LeCarre kind—and part period, love story (think a lower-budgeted Allied). It won’t go down in the annals of great films in any of these genres, but it manages to engage and keep your attention.

Red Joan is told in back and forth fashion, hopping between the year 2000, when the spy (named Joan Stanley in the movie) is discovered, and the period of her recruitment and active operational phase—the 1930s and the 1940s. Some irony seems intended, in that more than 50 years passed since Joan went to ground and the master she served –the Soviet Union—had ceased to exist a decade prior to her capture.

I can’t vouch for the veracity of the book on which the movie was based, but Red Joan depicts its protagonist as a bright, young physicist who rubs elbows with Communists at university. Indeed, she falls in love with one, and as she rises from student to staff member on Britain’s atomic bomb program, her Marxist friends and lover realize her value.

The aged Joan of the year 2000 is played by the wonderful Judi Dench and the younger iteration by Sophie Cookson. Cookson consumes far more screen time than Dench, but Red Joan likely would not have been made without the great dame’s name in first billing position. The rest of the cast is admirable, and the movie is well crafted and paced. But Dench is the engine.

Her age was clearly a factor, and the filmmakers did not tax her too much by shooting outside of a few locations (a country home, a police station, a hospital room). Contrast this with Clint Eastwood in The Mule, which was not a particularly good movie but saw Clint in just about every scene and all over the geographic map in terms of filming.

I mention this not to praise Eastwood over Dench, but the limitations imposed by Dench’s age—and I hazard a guess here—felt as if they affected the scope and structure of the movie. Maybe it should have taken place all in the past, the real meat of the movie and the most buoyant, as we watch Joan evolve from shy and innocent student to crafty and love-torn spy. Then again, without Dench’s participation Red Joan might never have been funded and made.

Returning to the thematic core of the movie; at first, Red Joan takes no sides, but as it progresses and you realize one has to judge Joan’s actions, the movie dons tap shoes and dances like Fred Astaire.

Again, I don’t know the real life facts of the case, but Red Joan seems highly calculated to avoid stigmatizing its lead character. You see, she moves in Communist circles but isn’t really a committed one. And much more importantly: Joan steals innumerable state secrets but had good reasons and didn’t realize Stalin was a bad guy at the time.

The Joan Stanley of the movie didn’t betray Britain or aide one of the most murderous and malodorous regimes in the history of mankind: she was just leveling the playing field. She didn’t want another war and believed allowing the Soviets to get the bomb cemented the concept and practice of mutually assured destruction. That is, if only America and England had atomic weapons they would be more likely to use them knowing the other side had nothing with which to counter punch.

So World War III was prevented by the brave actions of Joan Stanley (and others like her). Of course, the unintended consequence of this was allowing the USSR to flourish for more than half a century. If the Soviets did not have the bomb, maybe the gulag system would have collapsed far sooner. Maybe the suffering, oppression, and death the ‘evil empire’ wrought on the world would not have lasted as long if at all.

As one of the jurors in Twelve Angry Men said “You could suppose anything,” and Red Joan supposes a heck of a lot in letting its protagonist off the hook when she states her decision to spy was vindicated because the forty-five year cold war never went thermonuclear.

I find it hard to believe the filmmakers would really stand by this, and that’s why the movie feels like a giant disclaimer. Yes, we are allowing a traitor an ocean’s breadth of latitude, but we can’t fully endorse it and might not really share these views at all. That’s the sort of reluctance the film conveys.

To which I would have counseled during development: be bold! Make Joan a committed Communist like the Rosenbergs, who believed in Marxism above western values and did what they could to make sure the former bested the latter.

Perhaps this review seems harsh. I can’t pull my own punches, but despite my reservations there was a lot to like about the flow of the story and the performances. It is difficult to separate this from Red Joan’s morally relative conclusions about espionage and betraying one’s country, but it is a movie worth seeing and a story worth knowing about.