In just two days, the town of Midnight will reopen its doors to visitors from around the world as Midnight, Texas, the supernatural drama based on Charlaine Harris’ book series of the same name, premieres its much-awaited second season.

The show’s first season was filled with a variety of interesting characters, many of whom Blast Magazine had the opportunity to speak with earlier this month. Those individuals included Francois Arnaud’s “Manfred”, a psychic who can communicate with spirits, Dylan Bruce’s “Bobo”, the owner of the local pawn shop and boyfriend to Fiji, and Parisa Fitz-Henley’s “Fiji”, a local witch and owner of the town’s wiccan shop. Other participating cast members included Arielle Kebbel’s “Olivia”, a dangerous assassin, Peter Mensah’s “Lem”, a powerful vampire and husband to Olivia, and Jason Lewis’ “Joe”, an ancient angel living on Earth.

Blast Magazine: This season, we get to meet two new members of Midnight, Kai [Nestor Carbonell] and Patience [Jaime Ray Newman] who have moved to the town to open up a hotel. What is the relationship going to be like between your character and the new couple?

Jason Lewis [Joe]: Joe carries a certain amount of cynicism within him. He certainly has seen depravity over his eons in existence and he knows what human beings are capable of. Like a lot of the residents of Midnight, Joe is reluctant to put any faith into Kai and Patience. They come in and definitely start screwing with the entire dynamic of the town. You’ll have to watch to see how that ends up going, but I can tell you that things get a little complicated.

Arielle Kebbel [Olivia]: They are ruining everything. Olivia hates everyone until proven likable, and I don‘t blame her.

Parisa Fitz-Henley [Fiji]: Kai and Patience definitely cross into Fiji’s territory with the kind of work that they do, so she is immediately suspicious of them. Newcomers are always going to be looked at with some skepticism especially if they come in full force like they do, opening a business and inviting strangers into the town with them. It’s a very interesting dynamic between them and one that will evolve throughout the season in some very unexpected ways.

Dylan Bruce [Bobo]: Bobo is so in love and focused on Fiji that he doesn’t even care. He just wonders why everyone else is so suspicious of them since they are just new people in the town who can walk on water and heal people. He doesn’t really pay attention to them until later in the season when he definitely notices them. 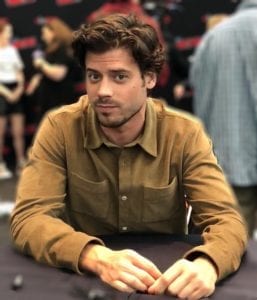 Francois Arnaud [Manfred]: Manfred certainly sees Kai as a threat. Whether he’s right to be suspicious or not, we will come to see. He is a threat but he can also be of help to the residents of Midnight, including Manfred. Kai is able to heal people of their powers and for the residents of Midnight who have spent their whole lives wanting to fit in and be normal, it poses the question of whether you would take the pill if it allowed you to blend in and rid yourself of what makes you unique in order to feel normal. Manfred has spent his whole life dreaming of that and now he is given that option. He also has just found a family that appreciates him for who he is, so it’s a difficult dilemma. Kai is married to Patience, who forms a bond with Manfred. There’s conflict there for sure.

Blast Magazine: Last season, we saw Xylda, Manfred’s grandmother, move on to the afterlife. In this season, at least in the beginning, Manfred is still feeling the negative effects of being possessed. Will Xylda be able to find a way to come back and help him with these issues?

Francois Arnaud [Manfred]: Even though Xylda crossed over and moved on to another realm, the writers were able to find a really clever way to bring her back that doesn’t feel like cheating. We didn’t think she would be able to come back and give Manfred advice but the writers found a way. I don’t know how much she will be there but she’ll certainly be around a little bit, especially at first. She’s like both the devil and the angel on Manfred’s shoulders. 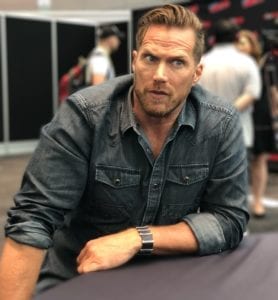 Blast Magazine: Joe has spent so much of his life hiding who he is. Now that his identity is known to the world, how will Joe’s role change in this season?

Jason Lewis [Joe]: This season, Joe is a much more active participant in the community and in his own life. Joe was basically hiding for a millennium from an angel who wanted to destroy him, so the first season was all about him keeping his head down. Now that he doesn’t have to avoid that, he has to figure out who he is. He goes through a bit of an identity crisis and things do get a little dark. Things in general get a little darker in Midnight this season.

Blast: Olivia and Lem took a big step at the end of the last season when they got married. How is that going to affect their relationship in these upcoming episodes?

Peter Mensah [Lem]: It’s an unusual marriage, that’s for sure.

Arielle Kebbel [Olivia]: Yes, it’s a human to a vampire. Pretty sexy. Olivia is a great interior decorator. She rearranges her apartment to make it suitable for her vampire husband. I thought that was adorable. I think it really shows how much she cares. Then, there is the serious stuff, but that’s a given.

Peter Mensah [Lem]: Can he actually really know what she wants and when she wants it? All he can do is lose. 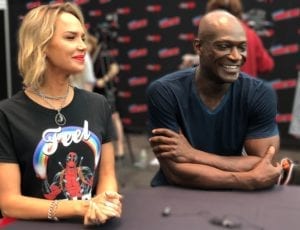 Blast Magazine: Francois, you’ve now brought the character of Manfred to life for two seasons. What do you feel like you’ve learned from this experience?

Francois Arnaud [Manfred]: The thing that I feel like I’m embracing more this year is just making myself more available to go from one extreme to the other. I think that’s something very specific to the tone of the show. Your character can go through something horrible and you, as an actor, have to ground that and portray that with emotional honesty. The next moment, you have to be able to embrace that things can be fun and funny again. It’s just really cool to touch on different genres and tone in the same universe.

Blast Magazine: In the first season, we were given hints of what Olivia’s life was like prior to her move to Midnight. Are we going to get more of her backstory in this new season?

Arielle Kebbel [Olivia]: Yes. I am so grateful for that because I really wanted to get into that. In season 1, she proved herself to be the badass that she is. Season 2 focuses on Olivia learning how to be married and dealing with the issues that brings up. She’s now sharing her life with someone and she has to figure out how much she can hold onto from her past while she’s trying to build all these new experiences with Lem, since she can only hold onto so much. It really causes her to go into her past and look at things to decide if she’s willing to face it and if she’s willing to let go. In the first season, Lem would always leech the pain away. In season 2, Olivia is really forced to feel it. I think in feeling that pain, she also has an opportunity to move through it. There will definitely be some father stuff that comes up. We get to learn more about her dad. There’s also a few surprises that come to Midnight that really knock her on her ass but in the best way possible.

Be sure to watch Midnight, Texas on NBC this Friday night at 9 PM!