It is said that in comedy timing is everything, but can that be true in tragedy as well? 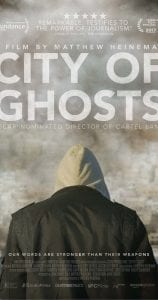 For a moment, I’ll sound like a newswire. ISIS or The Islamic State swept to power in Iraq in Syria in 2014. After the United States departed Iraq and rebels challenged Assad’s Syrian government, many power vacuums were created in the Iraq/Syria region. One of the cities that became most vulnerable to take over was Raqqa, Syria. ISIS quickly moved in and established this city as the capital of its so-called Caliphate. For three years, ISIS existed as a brutal, evil, stain upon humanity, and it looks like this very week it is all over for them, as they are being swept into the dustbin of history by a combination of Iraqi, US, Syrian, and Kurdish forces. ISIS is being crushed all over the Levant (and in Afghanistan too), but most symbolically the capital of their Caliphate –Raqqa—is no more as the city has pretty much been wrested from their control.

It’s a kind of perverse tragedy that this is ill timing for the gripping documentary City of Ghosts (premiering July 21), which chronicles the creation and on-going efforts of a group of citizen journalists from Raqqa who form a group called RBSS (Raqqa is Being Silently Slaughtered) to alert the world about what ISIS is doing in their home city. Through a network of reporters operating within and without of Raqqa, RBSS uses sunlight to disinfect the ever darkening grip of ISIS, which tries, with every propaganda tool in the kit, to portray the Caliphate –especially its capital– as a wondrous and prosperous place.

By cutting off Raqqa’s communication with the outside world, ISIS plays Potemkin Village or Baghdad Bob or whatever sleight of hand it can to distract the world from the ‘silent slaughter’ that is really occurring within the city walls.

The fall of ISIS (as of this writing) is a great victory in the sense that the work of the RBSS appears to have paid off. RBSS, among others, brought attention to ISIS’s appalling dictatorship, and within three years of its rise –at least as a quasi-nation State with a semblance of borders—it is dead.

Yet the other tragedy –and I hesitate to really call it such– is that the tone of the film seems to indicate ISIS and its grip on Raqqa could last for years, thus making the whole RBSS project a dubious, long-term proposition. A great deal of the film follows the journalists as they run and hide across Turkey and Germany, as ISIS agents attempt to hunt them down and kill them. Indeed, a number of their colleagues have been assassinated in foreign lands or executed within Raqqa, and every day the living members are looking over their shoulders as the bullet or the knife could fell them next.

It appears most of the movie was made in 2015 and 2016 when ISIS was at the height of its strength and repulsive notoriety, and perhaps it was just too late to add a coda or an update as ISIS began to finally crumble in the summer of 2017. I would have loved to have seen even an inserted interview or two with some of the journalists to get their reactions as ISIS was finally expurgated from Raqqa.

This is not to say the future of Raqqa is positive. The documentary opens with shots of a mostly happy city. The citizens are not pleased with the Assad government, but they do not fear daily beheadings, whippings, or sex slavery. RBSS clearly sprang out of the ISIS takeover of the city, but do the journalists really want to go back to life under Assad or whichever group vying for hegemony takes ISIS’s place?

Raqqa is in absolute shambles now, and rebuilding will take years. What will be the role of RBSS going forward, and how will they shape their beloved city’s future? It is unclear to me and perhaps even them.

Beyond the horrifying scenes of ISIS mayhem, there are some moments where the journalists are honored at an international press ceremony that strike a chord. Bow ties and chicken dinners and smiling western faces contrast vividly with the RBSS ‘award winners,’ as they appear almost embarrassed to receive accolades while their brethren in Raqqa are being tortured and murdered.

City of Ghosts is a documentary film to be admired and watched, but from the cynic’s point of view what will be the critical and public reception to a movie whose gestalt has shifted slightly now that Raqqa has been liberated and may soon be rising from the dead? Timing really is everything, whether comedic or tragic or anywhere else in between.