About 15 years back, a game called Burnout 2 caught my attention at my nearby Blockbuster. It was a normal racing game except for the fact it let you utterly destroy your competition by forcing them to crash into oncoming traffic. The crashing was so good that the game, and most Burnout games after it, included a dedicated crash mode to let you bask in the glory of metallic carnage. Danger Zone looks to recapture that cathartic feeling with a full game dedicated to crashing your cars into other cars. Unfortunately, the game lacks the energy one expects from such a thrilling concept and suffers from overall shallow gameplay. 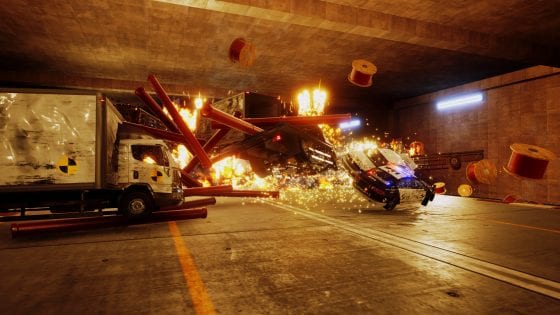 There aren’t many moving parts to the design of Danger Zone. You take control of a car in a crash testing facility and run through 20 unique scenarios where you rack up the most damage possible by barreling into other cars. The levels range from simple intersections to multilevel highways and high speed jumps. After you hit enough cars you have the ability to trigger an explosion, called a “Smashbreaker,” and control your now flaming vehicle into other untarnished cars. How much damage you cause depends on the timing of your crashes and how you use your “Smashbreaker.” In order to hit the really high scores, you will have to bounce around and grab some of the instant “Smashbreakers” littered throughout the zone. Through careful timing and a bit of luck you get some stress-releasing cinematic crashes that last several minutes before your score gets tallied. 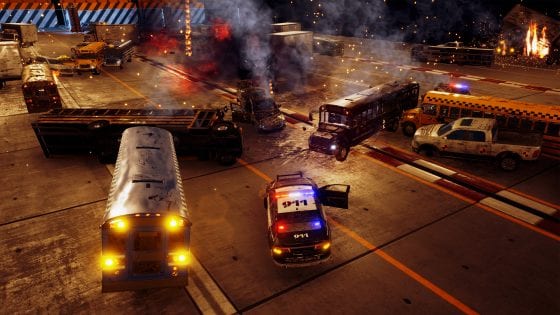 Problems start to pop up when you realize that linking your “Smashbreakers” is the most complex thing you will do in the game. There are no power-ups to pick up beyond some cash bonuses lying around the level. The fly over at the beginning of the stage gives hints to where you should aim your crash and the bonus “Smashbreakers” draw out a path to get the most money, but there is no deep seeded strategy at play. The difficulty in each section relies solely through level design, and though there are only 20 levels, the game felt too repetitive. The fact that I was also able to beat it in one seating doesn’t bode well and, unless you love climbing up the leaderboards, the replay value is stunted by there being only one game mode. 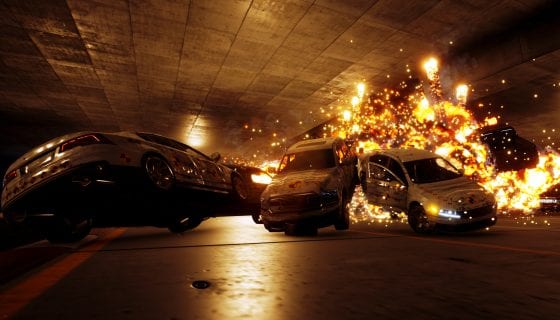 Simple gameplay could have been overlooked if the game added some personality to the already entertaining value of vehicular carnage, but sadly Danger Zone is as bland as a box of Corn Flakes. You only are only given one car, with no unlocks or customization to speak off. The crashes look cool enough, with great lighting and physics, but honestly they felt much more visceral in the original Burnout games 15 years ago. The cars get scratched up and blown up, but there is very little damage modeling and few of the breakable parts fly off. It might seem unfair to compare an indie game to a former Triple A release but Three Fields’ previous effort, Dangerous Golf, seemed to embrace the joy of destruction better than Danger Zone. That game had interesting environments and an overall tongue in cheek atmosphere that is severely lacking from Danger Zone. You are trapped in this dry simulator with nothing to keep you company beyond the hollow sounds of crushing metal. Also, you would imagine that a game so appropriately titled would have managed to score the Kenny Loggins classic, or at least something similar in the sound department, but there is no soundtrack to speak of. 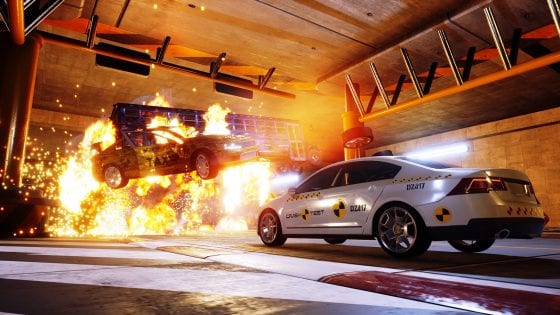 On paper, Danger Zone sounds like it would be an enjoyable title. Design a game from the ground up based on a cult classic game mode from years past and add a fresh coat of HD graphics. Unfortunately, 15 year old game modes don’t fair so well in the present. The game lacks personality, depth, and replay value beyond the handful of levels on offer. The original Burnout games captured the rather morbid fascination of slamming into a busy intersection at full speed and causing millions of dollars in damages. This game is basically like a computer trying to do the same thing without any of the charm. If you are hungry for some high speed destruction, Danger Zone might scratch that itch, but for most people this is one crash you are not going to want to slow down to take a look at.

Danger Zone Review: Dead on Arrival
Danger Zone's lack of personality and depth holds back the cathartic joy of smashing cars into one another.
Design
Gameplay
Presentation
Lasting Appeal
What worked
What didn't
2017-06-17
2.5Overall Score