Repetition is not a four letter word in The Sexy Brutale. As the elderly priest Lafcadio Boone, you are trapped reliving a nightmarish masquerade party where each guest meets their morbidly creative death at a certain hour. Through your ability (or curse) to restart the day, you have to prevent the untimely deaths from happening by altering the course of events. This engrossing investigative gameplay, coupled with the Groundhog Day powers you are granted makes for a devilishly fun adventure that unfortunately ends just a little too soon. 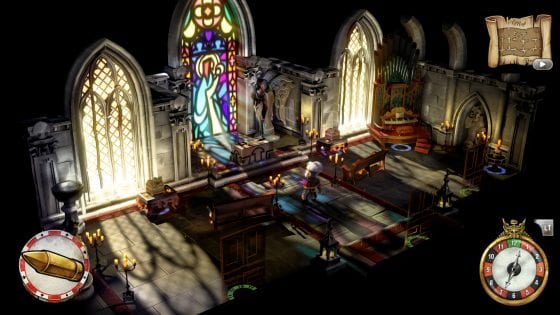 The game takes little time explaining the reasoning behind Lafcadio’s curious situation and exactly what his mission is. After a quick prologue you are dumped in a large, Gothic mansion where each guest goes about their day, unaware of their impending doom. Though it might seem overwhelming at first, the game makes it clear that you have to save the guests in a certain order, often placing Metroidvania style boundaries to stop you from going where you are not supposed to. To add to your predicament, you also can’t be seen by any of the mansion inhabitants. This means you will have to spy through keyholes, hide in dressers, and always be vigilant to their routine. A helpful map gathers information as you go about the day, letting you see where each guest will be at a certain hour. The game plays like a Anti-Hitman, where instead of secretly murdering your target, you have to save them without them knowing you were there.

Preventing each murder boils down to an addictive gameplay loop that gets better as the deaths become more complex. Generally, you approach it like a game of “Clue,” snooping around to find out who killed who and in what room, and work backwards from there. Eavesdropping on conversations can give more information about how each character is killed, with baddies often spelling out exactly how to save each guest. Often times the solutions were simple, like hitting a switch in a hidden room to turn off a magic trick gone wrong, or placing a blank bullet in a rifle. However, the Nancy Drew style snooping to get there was engrossing and had me wanting more near the end.

My only real complaint with The Sexy Brutale is that solving the murder of each guest can feel a little stiffing at times. At any point in time you have access to this massive mansion, complete with secret passageways and hidden rooms, but each murder only takes place in a much smaller area. It becomes obvious from the get-go that you are going to be figuring out this murder in the casino, or the guest rooms, or the theater while the rest of the mansion remains to be used for another chapter. Near the end of the game there were a few puzzles that required you to use several areas at once, but it would have been nicer to have to revisit old rooms more often. Being locked into a particular area also makes the puzzle solving pretty easy, and I was able to finish the game in about six hours.

To add to the Metroid-syle feel, each guest you save will hand over their mask and grant you a new power. I would go further into these but the fact is that you only really use a few select ones. The clock mask you get early on lets you change your starting point for each day to different clocks around the house while another mask grants you the ability to hear much better through doors. Beyond that, every other mask becomes very situational, with some of the later ones being used only to grab collectibles. It would have been more interesting if we could have used these powers to solve some of the murders rather than open some locked chests.

Although the puzzles had some missed opportunities, the art style powering the game was fully utilized to imbue it with unforgettable charm. The Sexy Brutale looks and feels like a modernized Grim Fandango in more ways than one. For starters, the masquerade ball atmosphere takes some heavy inspiration from Mexican Day of the Dead celebrations, while still retaining some Big Band 1930’s cabaret influences. The game also renders only one room at a time, making it feel like an old-school 90’s point and click adventure with pre-rendered backdrops. There is a bit of stutter when you enter some of the bigger rooms but it is not a game-breaking problem. At the same time, while the soundtrack is incredible, I found some of the loops to be a bit too short. Thankfully, it is quickly remedied by the consistently charming art style that continually drew me into the game. 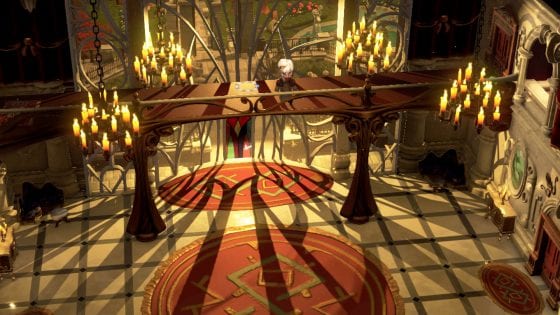 By the time The Sexy Brutale ended, I felt like I had played a very solid proof of concept. Lafcadio Boone’s endless loop came to a satisfying conclusion and each of the murders I had prevented taught me more about the mansion. Replaying the day feels very rewarding when you have new information, and while the puzzles were a bit too easy at times, I wanted to solve more by the end of it. Like with any good masquerade ball there were a few missed opportunities at the end of the night, but I will never forget my time at The Sexy Brutale.

The Sexy Brutale Review: Groundhog Day
The Sexy Brutale is an enjoyable puzzle game that makes up for its lack of difficulty with fantastic art design and an engrossing story.
Design
Gameplay
Story
Presentation
Lasting Appeal
What Worked
What didn't
2017-05-25
4.0Overall Score