Fans had been clamoring for a new Battlefront game ever since Pandemic was shut down and when EA dropped the remake a few years ago, the excitement was palpable. However, after the dust cleared, it became obvious that the game just wasn’t up to par with the previous games in the series or most modern shooters. With the announcement of Star Wars Battlefront 2 at this year’s Star Wars Celebration it is a good time as any to look back at where 2015’s game didn’t hit the mark.

Star Wars Battlefront had all the ingredients you need from a game to sink hundreds of hours into: massive multiplayer battles, incredible attention to detail, endless fan service. However, as I was happily mowing down Rebel scum in the forest moon of Endor, I couldn’t help but notice that I didn’t have much to show for it. I had unlocked new weapons, but they weren’t any more effective than my trusty E-11. I had also earned some cosmetic upgrades, but they mostly involved taking off my helmet for different skins, non of which are interesting until I reach level 40 or so. The grind to earn new loot was arduous and not very rewarding. At around level 25 or so, which took me over 10 hours to reach, I had most of my cards upgraded and very few weapons left to try. Picturing my climb to level 50 to earn that Tie Fighter pilot outfit didn’t seem that much fun. Now I don’t want Battlefront 2 to turn into Call of Duty, where at the end of every match there are dozens of rewards flying at my face, but giving me more interesting cosmetic options along with a wider variety of weapons would make the push to max level much more interesting.

The landscape of multiplayer shooters has split into roughly two kinds of games. Those where teamwork is key and those where you can Rambo your way to a victory single-handedly. Battlefront had always fallen on the former side, with original studio Pandemic taking a lot of cues from Battlefield 1942‘s class based system when deisiging the first game. When DICE, the studio that made freaking Battlefield, took over, everyone expected the reboot to be even more closely tied to team oriented, class based competition. Strangely, Star Wars Battlefront got rid of the classes that were so prevalent in it’s predecessors. Now, every soldier can heal, shoot rockets, and jetpack all over the map. The game modes still require you to communicate with your team to win, but you don’t necessarily have to work together if that makes sense. Bringing back classes can help Battlefront 2 feel more like the original games in more ways than one.

When the original Star Wars Battlefront launched in 2004 it was clearly a multiplayer first experience. The single player campaign mode was little more than a tour through the different maps where you got to face off against bots and complete slightly modified objectives. It wasn’t all that great and, aside from the addicting Galactic Conquest, did little to vary the gameplay. But at the very least it was there. If you wanted to experience a full battle, try out different vehicles or maybe try and learn the map layout, you had the ability to do so. Battlefront 2015 launched with little more than some wave survival scenarios that get old pretty quickly. Eventually they added some single player missions but it just left fans hungry for more. With such insane attention to detail and fan service, fans are ready to dive into a proper next-gen Star Wars story. And from the looks of the teaser trailer, Battlefront 2 is bringing that.

4. Get rid of Hero Tokens 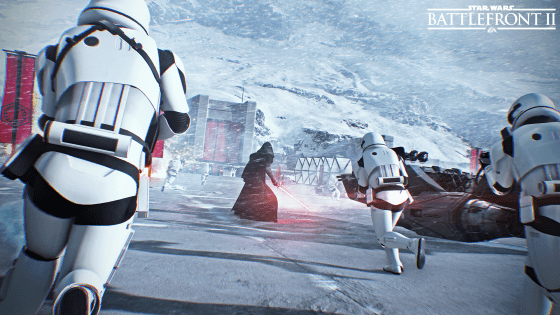 It must have been awesome to play as Emperor Palpatine and use his lightning to crush rebel scum in their boots. Or pilot the Millennium Falcon and out maneuver everyone in the sky as you duke it out with Slave I. I wish I knew what that felt like. The fact is that by making Hero units only available through tokens that spawn in the exact same place in every map, you find that people hoard all of the nice stuff. I can’t tell you how many times I uttered and Anakin rivaling “NOOOO!” because I was cheated out of the chance to be Boba Fett or to even get to fly in a TIE Fighter. Returning the vehicles to a team’s home base and making Hero units a reward for quality play rather than good timing can help bring Battlefront back from shooter mediocrity.

A lot of the problems I outlined above weren’t particularly game-breaking. They are nitpicks from an otherwise great game that got overshadowed by its much beloved predecessor. However, the one thing that is hard to forgive is the way EA nickled and dimed people out of extra content. The game’s five locations, while iconic, got repetitive very quickly and the amount of content released in DLC seemed to suggest the game could have included it from the get go. Not to mention the $50 dollar price tag on the season pass is downright indefensible. If Star Wars Battlefront 2 wants to win back some fans it is going to have to pack the content, and while DLC after launch is always welcomed, it has to be priced reasonably.

The excitement for the new Star Wars Battlefront is undeniable, and with the new movie coming out this year, the hype is going to only get bigger by the end of the year. Let’s hope EA and DICE can learn from their missteps on the first game and give fans the experience they have wanted to play since their childhood. Star Wars Battlefront 2 releases for PS4, Xbox One and PC on November 17.