Wonder Woman fans unite! Last weekend, admirers of the beloved superhero gathered together to celebrate all things Diana Prince at the annual Wondercon convention in Anaheim, California. The three-day event was filled with exciting reveals and activities, including a display of the iconic outfit worn in Wonder Woman and giveaways of the film’s poster. Cosplay enthusiasts also had the opportunity to participate in a meetup, where director Patty Jenkins took photos with the sea of costumed attendees before participating in a signing for some lucky fans.

As the film’s release dates grows closer, the desire for Wonder Woman-themed merchandise and memorabilia has significantly increased, a fact DC Comics has not ignored. At their Wondercon booth, they revealed some of the upcoming items set for release later this year. From beautifully designed Wonder Woman Converse, which will be a Journeys exclusive available in June, to a new Wonder Woman cosmetics line only available at Walgreens beginning this June, fans will have no shortage of ways to display their affection for their favorite Amazonian. 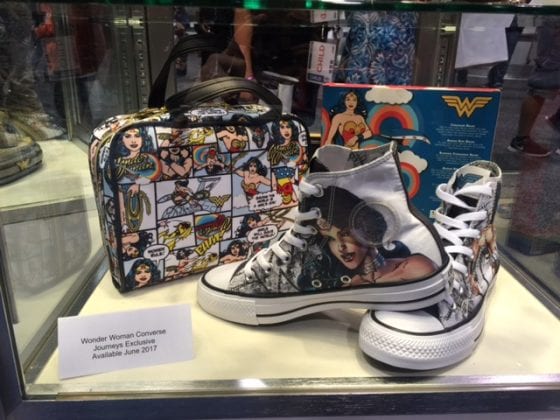 Many of the popular collectible companies also have plans to release new action figures and toys in anticipation of the upcoming film. Funko has already distributed a new line of Wonder Woman Pops to stores including Hot Topic and Entertainment Earth and will be debuting a Rock Candy Wonder Woman at the end of May. Mattel and Mattel Multiverse will have multiple variations of Diana Prince and Steve Trevor figures, which will be available beginning mid-April. Lego will also be selling a new DC Comics Super Heroes box set, entitled Wonder Woman Warrior Battle, which fans can purchase at Toys R’ Us and Lego stores on May 1st.

Although there was a plethora of Wonder Woman-themed festivities, the main event of the weekend for most fans was the Warner Bros. panel on Saturday evening, which promised new footage and surprise guests. After the audience watched the previously released trailer for the film, Geoff Johns [the film’s executive producer] and Patty Jenkins [the film’s director] walked out onto the stage. For the following 45 minutes, the crowd was treated to an inside look at the making of Wonder Woman in the form of a question and answer session between Johns and Jenkins where extended clips of film footage were inserted between moments of conversation.

Below are some of the highlights from Patty Jenkins’ answers at the Q&A: 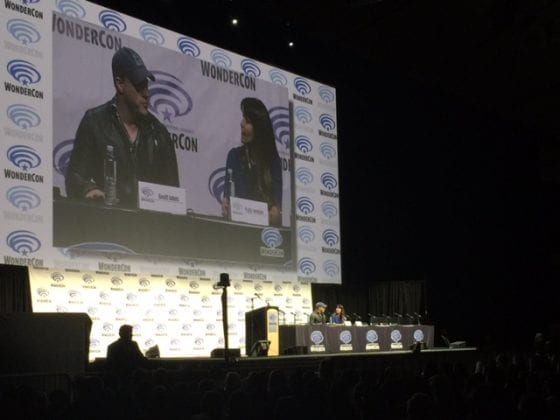 Superheroes have been an inspiration since childhood

“When I was 7 years old and Superman came out, I couldn’t believe the effect that movie had on me. I was Superman. It didn’t matter who I was or where I was. I was that little boy who ripped his shirt open and picked up a car. I was that character who faced those challenges and felt human.”

Every superhero deserves to have their origin story told

“It’s so important that every superhero get their day and get their origin story and hers is so beautiful and wonderful and one that deserved to be told.”

Diana Prince is more than just a superhero; she’s a trained fighter as well

“I think that we often get to see superheroes learning their skills but there is a great tradition in most kinds of fighting and martial arts of learning the honor and restraint and discipline of fighting. I thought that was a wonderful thing about her. She’s not only a special superhuman person, but also a trained fighter will all of the respect and longevity that comes with that.”

The superhero craze is never going to die

“It’s not about superheroes. It’s about this being the method of universal storytelling that all people have that is not of one religion or one thing. America ended up inventing this as a way to tell these metaphors about all different kinds of states of being. To me, they’re the same as the Greek myth or the Roman myth or religious figures of any religion. These are our common characters that we use to express stories about being a better person or what you would do if you were faced with various things. For me, that’s incredibly powerful.”

“She’s one of the very few who believes in goodness and kindness and justice and love. She comes to our world hoping to instill that in other people but is willing to use force if that’s what she must do to mankind to save it. It’s such a unique perspective to have a character who really is so strong and so powerful but essentially is all about love and truth and forgiveness and kindness and compassion. What a great role model for all of us. How do you save the world? You have to think for yourself at every moment and try to be a better person and none of that means you’re not just as strong and powerful as the next person.”

Wonder Woman is a love story, but that doesn’t make it any less of a film

“It doesn’t make it relegated to being a rom-com or anything. It’s just got a grand love story at its core and that embodies and acts out all of the real issues of the time. That’s where Casablanca comes in because Casablanca is a great love story because it’s about this period of time and the real politics and struggles and decisions that were being made within them. That’s what we went for.”

Wonder Woman is filled with action, but each scene directly contributes to the character journey

“What was fun about the action was that I really cared about doing it all as a character piece so the entire movie is really a character story and journey. Every time we get to an action scene, it clarifies what it is because it’s all from the point of view of Diana. It’s not about stepping back and watching action for action’s sake. Here she is and here is her journey and what she is seeing and how it affects her.”

Be sure to watch Wonder Woman when it is released in theaters on June 2nd!