Airbourne is the real deal. They carry the torch of pure, good-old, wild Rock N’ Roll, proud and strong. These lads from Australia rock the whole world and will slowly climb the steps to become the next AC/DC.

They are not liked very much by the venues for their wildness. No matter how much they get restricted, they always find a new way to go crazy. Now, I have seen these guys countless of times in Europe, playing in front of thousands of people, climbing 20 meters to the top of the stage, pouring beer on the audience through a fire hose, so I must say I was a little bit skeptical when I got on my way to their to their show in a much smaller venue at The Middle East in Cambridge, MA.

I was not disappointed at all. 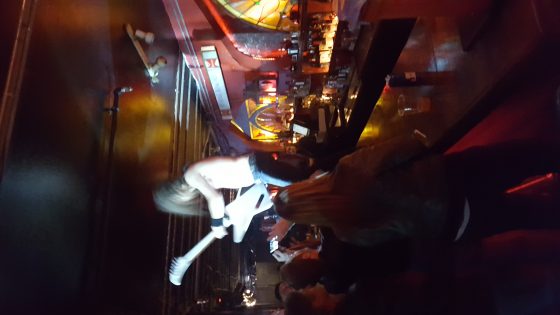 It was a completely different experience but it was just as amazing. I caught up with the guys before the show and had a little chat with the guitar player David Roads.
Their show was off to a good start with a great selection of opening acts. People were already warmed up, and drunk, by the time Airbourne got on. As the band walked out of the dressing room, their tour manager handed me a pair of ear plugs and said “You’ll really want to put these on.”

The band started off with their legendary song, “Ready to Rock” off their previous album “Black Dog Barking.” This was followed by the famous ‘Too Much, Too Young, Too Bad.” For those who have never seen them live, they are one of the few bands who sound exactly the same live as on the record. I am convinced Airbourne probably doesn’t require any production at all.
When the band hit the first note off “Rivalry,” I turned my head to the audience to see how much they will be able to sing along to this newly released song. Although the band was louder than hell, the audience literally took over as soon as the song started. The band played other classics such as No Way but the Hard Way,” “Live it up,” and “Running Wild.” 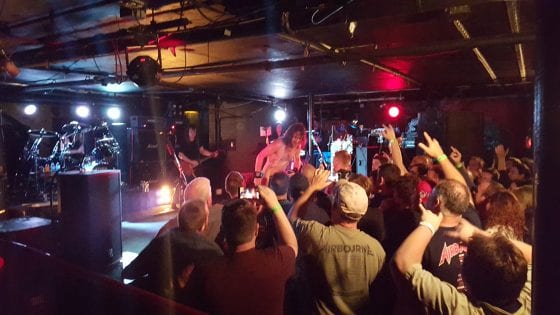 Speaking of sounding exactly the same in the record, instead of playing the “war alarm” sound in the beginning of “Live it Up” off the tape, they literally brought up some sort of machine on stage and started turning the arm to produce this sound.

Now you may ask, where is the craziness in this? Honestly, my memories of that night are not all that clear, but here are some highlights:

• Midway into the show, front man Joel, jumped into the audience, headed for the bar, climbed on top of it, smashed all the drinks, played a solo on the bar and then jumped down opened all the taps, poured himself a drink and then headed back to the stage.
• During the final song, ‘Running Wild’, Joel found himself a full can of beer, cracked it open by smashing the thing into his head and drank all he could, spilling the rest on the audience.

So do you need to hear more to catch these guys next time they are around? Even though you may not be a fan of the music, I promise you it will be a great party.

Disclaimer: Although I was wearing ear plugs and in the back of the stage, my left ear completely lost ALL its functionality for the next 2 days, and it took more than 2 weeks to fully recover, but you know what they say, “If it is too loud, you are too old.” 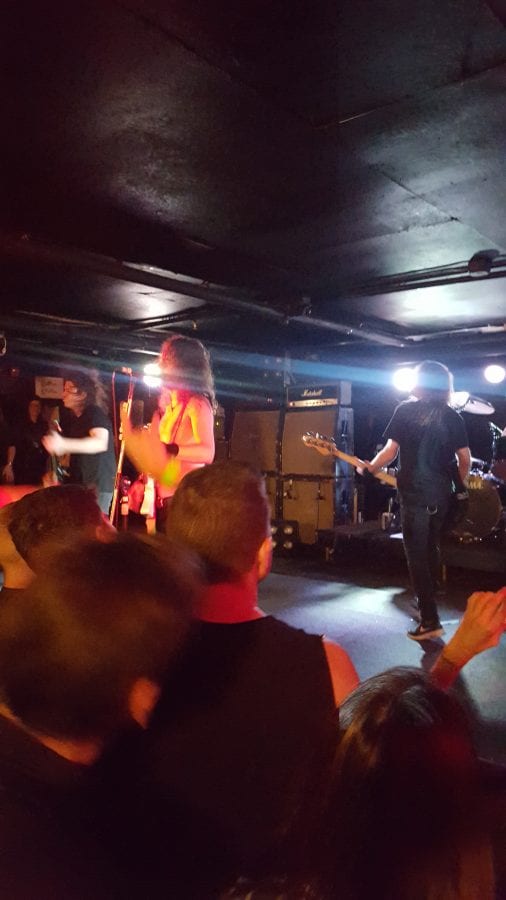 How is the tour going so far?

It is good. It has been really fun actually. We are nearly at the end of it now. This is our 3rd to last show here in Boston. We started in San Diego and we went up the West coast and then across Canada it has been really good.

You recently released “Breaking Outta Hell” and a lot of people were looking forward to these after “Black Dog Barking.” How’s the reaction so far?

So far so good. The response has been really good so far. Especially from all the fans back in Europe and UK, the feedback has been positive. We knew what we were shooting for when we recorded the album and I believe we have achieved that and it is great to see the response of the fans. See them talk about their favorite song on the internet. So far, so good.

Going back to the recording process. What is your favorite memory?

The whole thing was really good. We worked with Bob Marlette off the first album again. He was just a great producer, very experienced producer. He got a lot of tools under his belt. Working back with him again was really good for us. He knows us well, he knows the band well, he knows our style of music well. And then having Mike Fraser, the legendary sound mixer and engineer. Having him on board was awesome. We had come here to Australia and recording in Melbourne. And the whole thing had just run really smoothly from start to finish. It was a fun process. We achieved what we set out to do. The whole thing was really memorable really. I guess the most memorable part was the end of the album, the last day when we all cracked Cuban cigars, had some single malt whiskeys and champagne.

Which song off the record do you enjoy playing the most live?

Well, at the moment we are only playing “Breaking Outta Hell’” and “Rivalry,” the two singles. “Rivalry” is a different song for Airbourne. It is a more groovy, more slow tempo type song. It is like a new challenge for the band, but it has been going down really well. My personal song that I like off the album, being a guitarist, I just like the riff off the start of “I Love ‘Down on You.” I loved it when it was a demo, I loved it when it was a work in progress. It is a really catchy riff that I like to play personally. But you know, I love all the songs.

I really wanted to hear ‘It’s All for Rock n’ Roll’ tonight, but I guess next time. How would you compare touring in Europe vs. U.S.? Obviously you are much bigger in Europe. There are no places to climb in this small venue.

Yeah…ha-ha! The fans are the same no matter where we go. The rock fans are the same, it is a culture you know. We don’t mind if we are playing on big festival stages in front of thousands of people or coming back to the pubs where we started. We have been playing a few small venues on this tour in the States and I don’t care if we are playing in front of 200 people. They are all the same passionate rock fans. Come dance, sing all the songs and have a good time. We like that energy of being personal, up close with your fans is great. But in festivals you are more segregated away. But you know America is one of those markets, we haven’t played here enough, we need to get back here and just do more tours. It is huge country, huge market. We need to spend more time here. And this tour has been positive so far, we need to back that up, get here more regularly and tour more and more building that up. 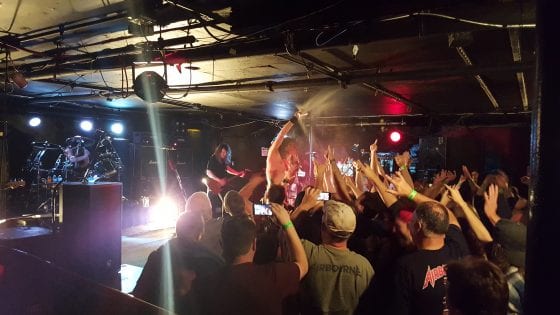 Do you have any hobbies, besides music?

How did you start playing? Did you take lessons?

Yeah it all goes back to primary school. Or what you call here elementary school.

I am not from here but…ha-ha

Oh [laughs]. I started like in grade 5. In primary school, I actually played piano a bit. I can’t remember much of it. I was pretty young and I didn’t really get into it. It is something I would be down learning maybe. It is a good song writing tool. Then I picked up the guitar. Obviously, I was listening to some rock n’ roll, and all the guitar band, of course I wanted to play guitar or the drums. So I learned guitar for a year. When I got to the secondary school, I did basic lessons and then I got into the drums for a year and sort of played them. Just did lessons with that as well. Because I grew up in the country, I grew up on a farm, I didn’t have access to playing in bands and stuff until I was you know 18-19, and I could drive. So I did lessons and played instruments but I didn’t have anyone else really to jam with mates, nothing too serious so it wasn’t until I was sort of older, I was able to start playing in bands.

What was your first guitar, do you remember?

Well actually I don’t remember the brand of it. It might have been a Semic. Actually there was no brand on it. It was just old acoustic. Really rough, really thick neck on it, the strings were stiff. It was a dog of a thing to play. I just really wanted to play and I played the hell out of it. I screwed my hands and fingers up from trying to play it. But my first electric actually, I loved Gibsons and I worked my ass off working on school holidays, and then I bought a Les Paul studio. And my brother actually played at one stage but he doesn’t any more. He had a Semi Electric guitar. So yeah I would say that Les Paul studio was my first proper guitar.

Who would you say your influences were?

Is there anyone you would want to collaborate with or feature on your songs?

I haven’t really thought actually. It might be cool to do something with Slash because I know he does some of that stuff. It would have been really good to maybe collaborate with Lemmy. Because we had a lot to do with Lemmy, he was in our film clip. That would have been cool, just to rock something together. 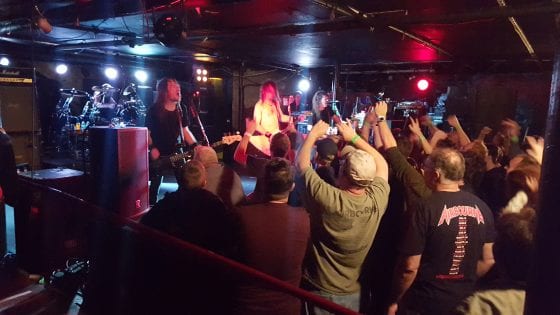