When we last left our adventure for the Crown of Kings, we made our way through Khare, the Cityport of Traps, and into the Backlands, the the uncharted lands of legend. “Steve Jackson’s Sorcery!: Part III” has us play through this most perilous of chapters, carrying the weight of every choice made in the last two parts. The initial impression of the digitization of the Steve Jackson roleplaying books was a very positive one and Part 3 brings in an unprecedented level of creativity to the formula. 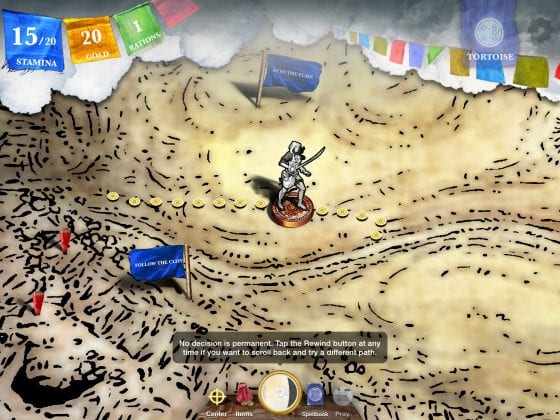 The Backlands are an arid, and terrifying environment. As we are getting closer to the Archmage, our life is on a much shorter fuse, and any wrong step can mean sure death here. Inkle did a great job of conveying that into the story, as the generally helpful interactions you had in the first two chapters are not as frequent. This is a place that was ravaged by the elements, so every character you meet seems keen to swindle you. The conversation trees can lead to several different outcomes here, so I had my finger on the rewind button in case I ended up losing some valuable equipment after a particularly nasty encounter.

The search for the spell lines at the end of Part II sullied the experience for me a bit, but this time around there is a clear goal set out for you from the beginning. Seven mythical snakes have been unleashed on the world and are hunting for your skin. These elemental beasts are hidden throughout the map and each carry a particular weakness that you must decipher in your travels. Though it is as much of a maguffin search as the spell lines, the fact that this is outlined from the very beginning makes it easier to swallow. However, I did spend more time than I would like scouring the map until I triggered the correct event that would cause a snake to appear. Sometimes you do get the exact information on where to find them, but it took me a couple of playthroughs to really pin them down.

This is alleviated by the cleaver beacon system implemented into the world. There are five or so interactive lighthouses throughout the map, each giving you the ability to bend time and space to your will. Point the beacon to a group of ruins and watch them turn into a thriving village. This ability to freely travel through two instances of the same world opened up a slew of possibilities for solving puzzles. At one point I had to cross a bridge that would take me over a mountain range. If I do it when the bridge is fully built in the past, the gate keeper will take some valuable items of mine as payment. However, by carefully aiming the light of the beacons I was able to build enough of the bridge to get across, while having a crucial part destroyed so that I could climb up. It is a very well implemented mechanic that adds a ton of depth to the already expansive environment.

Part 3 feels much more open than the previous “Sorcery” chapters and the game grows thanks to that. Gone are the claustrophobic alleyways of Khare and in their stead you find ruins to explore and marshes to travel. The spell system also becomes much more fluid, with smaller spells having a bigger impact on the environment. The time traveling beacons gave way to some very interesting puzzle solving and literally doubles the areas you get to explore. While traversing the lend aimlessly looking for the snakes was a bit of a drag (and the number of in game days it took me might be too long if the text at the end is anything to go by), you know what you are getting into as soon as the game boots up. “Sorcery” continues to be a fantastically rich, easily digestible RPG that rewards real creativity when it comes to solving problems.