Every couple of years, the real time strategy genre gets a sort of rebirth. One adventurous game takes it upon itself to push the graphical boundaries of the current slate of computer hardware and tries to build a competent game around the visual show. “Ashes of the Singularity” has taken that responsibility. Backed by the well respected team behind “Sins of a Solar Empire” and a lengthy Early Access campaign, you would think that the final product would be an extraordinary strategy game that would turn the genre on its heels. Unfortunately, aside from the way it looks, “Ashes of the Singularity” is frustratingly run-of-the-mill. 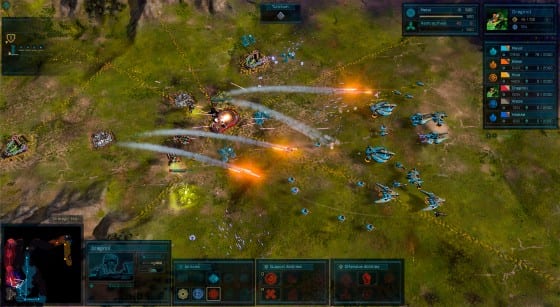 Picking up where “Supreme Commander” left off almost ten years ago, “Ashes of the Singularity” takes pride in massive unit counts and strategic planning over micromanagement. This part of the formula is unequivocally right. I fielded hundreds of tanks, missile launchers and capital ship-style dreadnoughts in my eventual conquest of the map and the engine never once stuttered. You can even argue that the price of admission is almost worth it when you see your vast army square off against your enemy in open combat. This spectacle is also accompanied with some stunning particle effects that help distinguish where each shot is coming from and stand out even when you zoom out high into the sky to get a better view of the action. Managing these ridiculous numbers of units is made easier by the ability to group them together into armies that act as a sort of hybrid mega-unit. Armies will line up and deal with targets strategically, letting you worry more about where to send them rather than the minutiae of combat. This hands-off approach is echoed in the way you build units, as your base economy is on a streaming format. So long as you are producing more resources than you are spending, you will be in the green, no need to wait until you have enough of a certain resource. Couple this with a handy “repeat queue” button in your factory and your base will quickly provide an endless stream of vehicles to do your bidding. 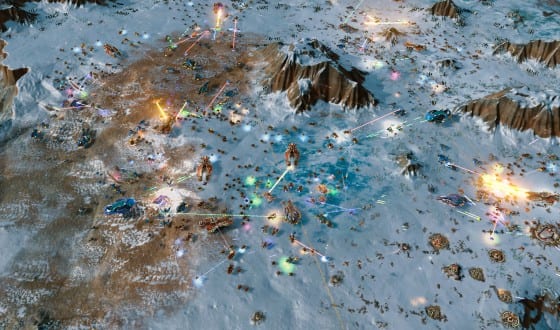 However, this marco planification does have its downsides. The rock, paper, scissors format so ingrained in the RTS culture is not really present here. Sure, you are better off attacking slow moving units with plenty of little guys and anti-air units will shut down any attack from the sky, but the lack of unit variety leaves most encounters down to a battle of attrition. Since you tell your army to deal with the enemy army as best it can, you are unable to tell all your units to focus on the enemy dreadnoughts, the toughest units int he game. Only your Nemesis class cruisers will focus on these roaming battle stations, so I often times found my army to be completely useless if it was overwhelmed. While other strategy games let me win a fight if I am outnumbered, “Ashes” removed my ability to control the action. It is more important to carefully select what resource point you are going to attack next and how it will affect the overall scheme of the match rather than focusing on the details of each fight. It is a more mental game than the fast paced “StarCraft’s” out there, but its large scope leaves me yearning for more depth to the overall gameplay. Matches are won or lost at very crucial moments, and I rarely saw a come from behind victory. While I understand “Ashes of the Singularity” is a different beast from the standard competitive RTS’s out there, the excitement level is turned down a notch as a result. 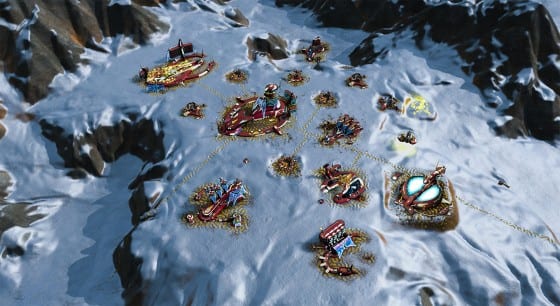 This permeates into the story mode which is undoubtedly the worst way imaginable to get acquainted with the game. Set in the distant future, where humanity has reached the titular singularity and has come free from its organic prison, the story mode tells the tale of the Ascendancy Wars against a mysterious alien threat. The eleven underwhelming missions are completely devoid of character development and only serve to give you haphazard scenarios in which to learn the game mechanics. But even this is done incorrectly. Often times the game would be three steps ahead of me, and would launch new threats immediately after telling me they were coming. This would give me no time to prepare and require me to replay the missions over and over so that I would not trigger the checkpoints until I was ready. Also, if a cut scene would trigger when you were moving, an annoying glitch would make you lose control of the camera and have to restart the game. I don’t expect “Homeworld” level stories out of every RTS I play, but the heavy handed storytelling along with little in the way of distinguishing the two warring factions did not do “Ashes of the Singularity” any favors. 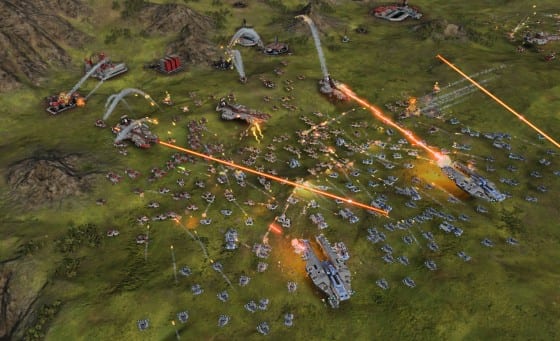 To get the real meat out of the game you have to dive into skirmish mode. Here, up to six AI or human controlled armies can duke it out for control of the map. The two factions available are mechanically different, with the humans countering the alien’s speed with tougher units. Sadly, the lack of any real tech upgrades means what you see is what you get with each faction and you will quickly find out there are only so many ways to play out a match. A third faction would have probably fixed this, as would more unit variety. How much you enjoy “Ashes” will come down to how many skirmishes you can muster before your head gets buried beneath the ever growing army at your disposal. 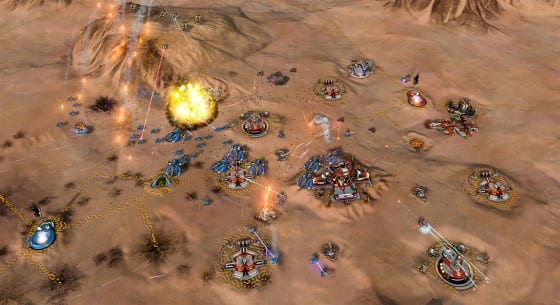 The stripped down nature of “Ashes of the Singularity” might attract some real time strategy purists, but I found it to be an exercise in patience rather than a thrilling strategic experience. Sure, the battles do look gorgeous and the insane amount of units on screen rivals that of the “Total War” series, but a poor story and lack of depth to the combat failed to draw me into the world. It is this disassociation with the game world that “Ashes” wants out of you. It is fitting that you take the role of a human mind devoid of any personality, blindly sending out armies as a means of taking over more resources. Perhaps I have been spoiled by more charming RTS’s in the past, but “Ashes of the Singluarity” just felt dry to me.

Ashes of the Singularity Review: Transhumanist divide
"Ashes of the Singularity" might attract some RTS purists, but it's an exercise in patience rather than a thrilling strategic experience.
Design
Gameplay
Story
Presentation
Lasting Appeal
What worked
What didn't work
2016-04-12
2.8Overall Score
Reader Rating: (0 Votes)