The Topps Company has been a fan favorite for over fifty years, well known for their production of both sport and pop culture trading cards. While this remains a profitable market for the company and brings them new customers daily, Topps has capitalized on the ever more popular digitalization of physical collectibles. From comic books to CDs, there has been a consistent growth in the movement of desired products from the material and palpable to the digital and intangible. Though some fans of the company’s past offerings are not fond of this development, there is a growing community worldwide who has found a new way to be a part of this beloved hobby. 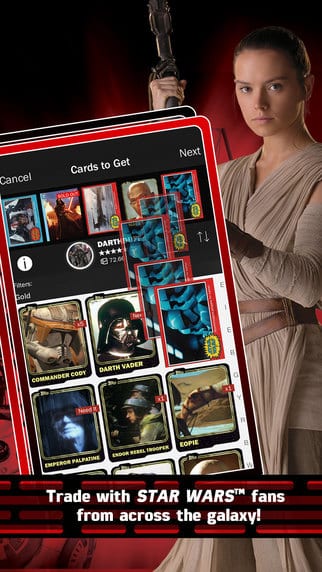 Created last year, the Star Wars: Card Trader app has flipped the world of card trading on its head. No longer are enthusiasts limited by their physical location and the capacity of their local stores. Now, through the use of the app, users can trade with members from around the world and ensure that they can complete their collection as desired.

Last month, Topps had a booth at the inaugural Silicon Valley Comic Con, a convention that combined the latest in technology, pop culture and comics. The event, founded by Steve Wozniak and held at the San Jose Convention Center, brought together everyone from Stan Lee to Michael J. Fox, allowing fans of all mediums to immerse themselves in a fun and exhilarating weekend. For Topps, the goal was to both educate attendees on the existence of digital trading cards as well as promote the fun that can be had once you’ve become engaged in this updated version of a beloved hobby. Interested spectators were able to try out demos of the app on the provided tablets and sign up for an account immediately, while those who already had the app downloaded were given thousands of free coins and credits. Attendees could also take home large Star Wars posters depicting the designs of some of the cards offered within the app.

Topps is one of the first in the digital trading card marketplace, setting itself apart with its visually appealing art and welcoming community. The app’s user count grew quickly in the past year, greatly owing to the excitement that was garnered around the series’ latest release, Star Wars: The Force Awakens in December.

There are a variety of card packs that can be amassed, ranging from the vintage series to the elegant weapons collection. Each has its own unique design and style and the full collections appeal to a range of tastes and preferences. The vintage series, which is limited to the digital realm, is designed to look played with and older, making users feel as though they have owned and shown their cards for a long time, even though they have never physically touched them. One new card from this series is released every Thursday, leading users to count down the days until they can add the newest design to their set. The elegant weapons collection holds the Darth Vader weapon card, one of the rarest offered, with only 10 in existence within the app. For those that prefer a challenge, there are packs called disruption sets, which have a code that must to be figured out in order to access the cards. 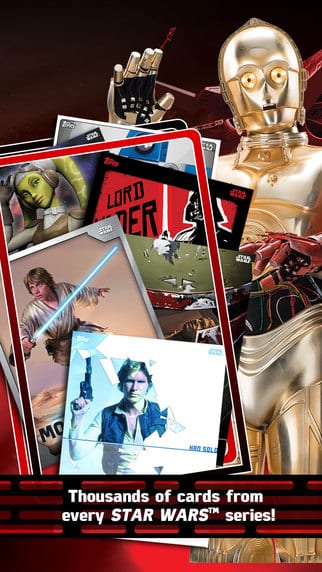 An interesting feature of the app is an area called the “smugglers den”. Here, users can upgrade their collection for the chance to add an exclusive rare card to their assortment. For example, if you have five of a certain variant, you may be able to trade them in for one of the more unique variants only accessible through this feature. For the users who wish to spend their own money, packs of coins are available for purchase, which can then be exchanged for the card desired. However, those who wish to participate without a financial investment are welcome as well, evidenced by the free credits and new card that is given to every user each day just for signing into their account.

While there are both physical and digital licenses for Star Wars, the different cards for the two mediums ensure that collectors will be exposed to a variety of designs and options and allows the non-app users to still participate in the exciting Star Wars distributions. The app provides never-ending enjoyment and there is truly something new every day, ensuring that users won’t get bored or complete their sets too quickly. Thus far, no one has been able to finish the full collection and with so many updates consistently added, it may be a while until anyone does. 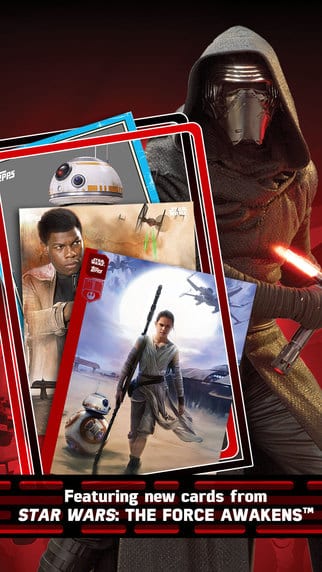 Moving forward, Topps plans to create more Star Wars cards representing the whole universe, including characters and motifs from the original films and Star Wars Rebels, the animated television show on Disney XD. They intend to build out the technical capabilities but realize that it’s important to not push the envelope too far and stray from the trading cards people know and love. They are also actively building apps for other entertainment and sports properties and the expansion of the digital card market to other franchises and genres can be expected very soon.

For those interested in downloading the app, it can be found in the Apple Store and on Google Play. Once downloaded, go to www.topps.com/swct and enter the code “Blast” for bonus coins.