Whenever I think of Dark Souls, I think of the scene in Jaws where the crew are sitting around the table comparing scars. They’re talking about the scars that serve as souvenirs from each of their greatest battles. Nearly every single step in Dark Souls III felt like  I was heading towards my greatest battle and walking away, or more often than not failing to felt like another scar to talk about or another tale to tell to my fellow travelers. Much like it’s predecessors, Dark Souls III is incredibly challenging and brutal while being rewarding at the same time, but you already knew that. What may surprise you though is how open the world is and just how gorgeous it can be. Not all of it’s new ideas land as successfully but Dark Souls III is unquestionably a fantastic experience that plays like a love letter to it’s very devoted fan base.

Much of the core DNA that makes the Dark Souls franchise so unique returns here for the new game. You’re still going around, killing monsters, collecting souls and using them to level up. The extremely solid combat makes a return and it’s as exciting and rewarding as ever to take out the monsters, demons and beasts that haunt the kingdom of Lothric. For what it’s worth, I thought that the beginning sections of the game were almost too easy, now when I say this please understand what kind of Dark Souls player I am; a terrible one. It usually takes me an embarrassing amount of time to get through even the easiest enemies but I was able to clear the first few sections, including the first few bosses with relative ease, and diehards (I’m looking at you people on Youtube who beat the game with a dance-pad) may end be blowing through the first few sections remarkably quickly. I also felt like  with Dark Souls III From Software learned a lot from Bloodborne, as the game controls like a mix of the two franchises and I played a whole lot of Bloodborne, so that may have helped.

Regardless, rest assured that Dark Souls III has not gone soft and the series trademark difficulty comes back very quickly. Enemies are smart and aggressive, seemingly even more so than in previous games so you’ll have to approach nearly every battle with cautious planning and effective strategy if you have any hope of making it out with your souls intact. The advanced hardware running Dark Souls III allows for more enemies to target you at once than ever and it’s pretty likely that you’ll be completely overwhelmed with even a few missteps. I tried to outrun a higher level knight enemy earlier in the game only to run into what I could only describe as a colony of demon skeleton warriors. Did I die? Of course, but I learned from my mistake and that led to me to advance even further into Dark Souls III, and that’s what really makes the Souls games so interesting, you have to earn everything and it feels so good when you do. 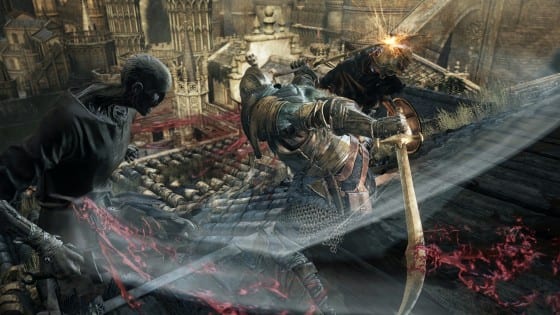 Like all of series creator Hidetaka Miyazaki’s games, the boss battles in Dark Souls III are both my favorite and least favorite parts of the game. Often gigantic in both scale and difficulty, I’ve rage quit more times than I’d like to tell you with some of the game’s bosses, especially those in the game’s later half. Learning from Bloodborne again, most boss battles have two phases and you’ll have to change-up your strategy if you want to be successful. These boss battles regularly require an outstanding amount of planning and strategy. I was very surprised though to find that some of the boss battles were almost shockingly easy. They were stunning in appearance but even with mid-level weapons, I was able to take them out in only a few hits, which felt like a waste of a boss battle. I remember a few times I even thought I was missing something and I was waiting for another mutation of the boss, which isn’t that out of the question in a souls game when you think about it.

While the worlds of Lothric aren’t as connected as in the original Dark Souls, Souls III benefits from having some of the game’s most open and fantastically created areas. Right from the game’s onset you’re given a number of different paths, each leading you in different directions and each that I felt like I absolutely had to explore. One may lead you to a fantastic view of the mountain ahead of you, but it also leads you right into a number of high-powered enemies. The path on the right may take you through a larger number of enemies but it gives you a better chance at getting a better sneak attack on that same larger enemy. You can spend a huge amount of time exploring each nook and cranny of an area and those willing to do so are often rewarded with better gear and even entire hidden areas. There was always something to do or see in Dark Souls III, even if those things often served as distractions for the giant enemies looking to introduce me to the pointy part of their blade.

Similarly, Dark Souls III benefits from some fantastic animations. The previous games didn’t look bad for their time but even the re-released versions of the second game looked dated after long. There’s usually a lot going on in Dark Souls III and besides a few frame rate drops, the game handles these moments mostly well. The game features massive enemies that often take up most of the entire screen and it’s a lot of fun to watch how they move (protip: don’t watch how they move for too long). The same goes for even the smaller enemies, I loved exploring new areas when they would open up as I never really knew what I would see. I remember a specific moment where early in the game a knight character came out from a pathway straight ahead of me. We both stood there looking at each other but he moves so smoothly….then he killed me with one strong hit.

You see this scar? It’s from a flying skeleton that ambushed me in a cave. Oh, this one? That’s from a giant mutated boss that I struggled with for hours. Dark Souls III is as challenging and tough as ever, but it’s incredibly rewarding at the same time. It’s larger than any game in the series and as a result, encourages exploration to a degree we rarely see in adventure games like this. If Dark Souls III is the last game in the series (at least for now), it’s going out on one hell of a high note.

This review is based on both a PC Xbox One retail unit provided by the publisher. The writer has not seen daylight since they were set.Praise the sun.

Dark Souls III Review: Scars
Dark Souls III does more of what makes the series so unique, but adds enough to make it worthwhile. While not all of it's new ideas land quite as well, this is a must play for those looking for a challenge.
Design
Story
Gameplay
Presentation
Lasting Appeal
What worked
What Didn't work
2016-04-04
4.5Overall Score
Reader Rating: (1 Vote)