Typing games are an often forgotten part of the video game pantheon. While a few classics like “Z-Type” and the glorious “Typing of the Dead” carved out their own fanbase, the genre has been kept to the sidelines for the most part. This is mostly due to the games devolving into an endless wave of words that challenge your quickness on the keyboard. It can be fun for a while, but the novelty wears off quickly.

“Epistory: The Typing Chronicles” is not like those games.

By creating a unique world with an insightful plot, “Epistory” succeeds in making typing a narrative tool rather than a overbearing gimmick. 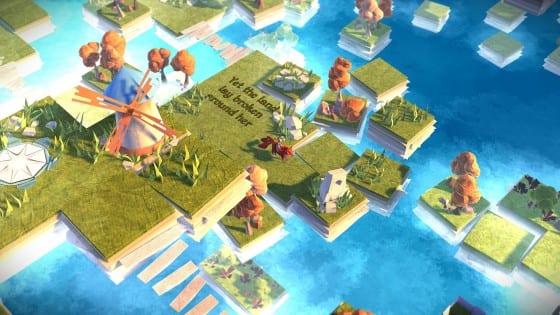 The game dawns with a girl riding a three tailed fox on a floating series of platforms. As you move forward, a narrator begins to tell your tale, building a colorful forest around you. The words she speaks remain etched in the game world forever, granting a certain gravitas to the message. The art style begins to shine with each step as trees sprout like a pop-up book and the environment seems to be crafted out of paper. While the similarities to 2011’s “Bastion” are obvious, “Epistory” distinguishes itself as soon as your face your first obstacle.

Hitting the spacebar will halt your movement and allow you to type up any words that appear on screen. At first, inanimate objects that litter the landscape can be cleared, earning you points to level up your character. After some times though, some nasty bugs will start to appear, hawking much more difficult words that have to be typed before they hit you. The trick is to balance out when to hit the lethal enemies and when to aim for the scenery, as each correctly typed word will give you a multiplier with a limited time to pound out the next word. While most encounters will happen with little straggling bugs, the real meat of the game is in destroying the nests that are plaguing the world. These act as a sort of boss fight at the end of each dungeon, leaving you in the center of the room as you battle away massive, 12+ letter monsters that slowly creep towards you. Carefully typing out “ostentatious” and “telecommunication” is balanced out with fast moving flies that require a single letter to take out. It is a fabulous dance to determine what word you need to focus on next and downright pulse pounding when you survive some of the more ridiculous encounters. 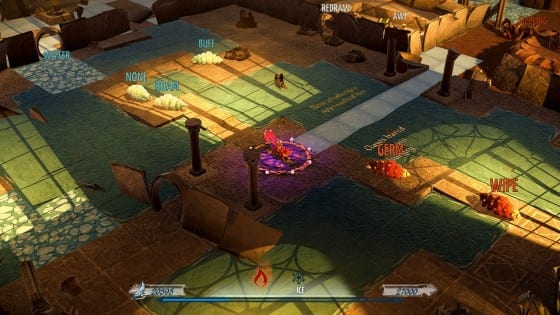 To help you with this, you will pick up four different magic types throughout your journey. Fire burns away the next word in multi-word monsters while ice will leave the enemy in their place, giving you valuable seconds to deal with more immediate threats. These will be your most used magics, as spark can knock out words from multiple enemies but often left me confused as to what to do next and wind only delayed the problem by shunning enemies to the end of the room. Some of the most annoying pests will only respond to certain types of spells, adding an extra layer of strategy to each encounter.

A Zelda-like overworld will guide you to each dungeon. Each one of these features a different ability to learn and are unlocked when you reach a certain number of skill points, meaning you won’t face any challenge you are not ready for. The visual highlight of the game comes in each of these areas, as the lighting and artistic details help paint a powerful mood. It quickly becomes clear that you are playing through some key moments of this girl’s life, dealing with love, death and friendship. The words you type grow to reflect this, such as “bursar” and “practicum” chasing you around when she is reliving her college years. A few of these moments felt like they were reaching a bit too much though. I struggled to sympathize with her as I made my way through a cave representing her trying to find a creative spark after I just beat a solemn level about someone’s death.

The only real gripe I have with “Epistory” is in the movement. You move your Tails lookalike with the use of WASD or a more unorthodox EFJI, which is supposed to place your hands in a more typing ready position. Unfortunately, parts of the game require some careful navigation, something that is nearly impossible with only a keyboard. A few of the ice dungeons, where the fox will uncontrollably slide off into the last direction you input, were particularly frustrating. This is accompanied with a few audio issues and visual glitches in parts of the game. Nothing that should not be able to be patched, but worth noting in a game coming out of Early Access. 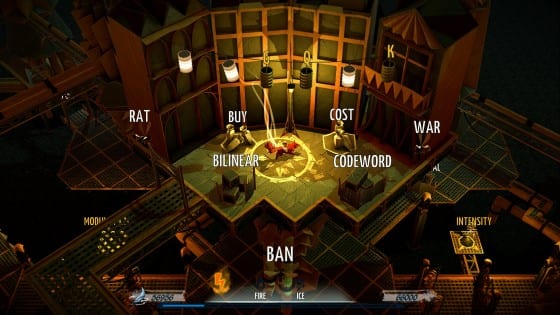 Unlike its typing brethren, “Epistory” is a game that succeeds despite its unique combat mechanics. I would have been perfectly pleased if my adventures through this girl’s muse were designed as a traditional dungeon crawler. What elevates developer Fishing Cactus in this regard is that they revived a forgotten gimmick and put it to clever use. Typing in “Epistory” comes with real meaning; a true power to the written word that we often overlook in modern gaming.