Although you may not recognize his face, you have definitely heard James Arnold Taylor’s voice before. Perhaps you know him as “Ratchet” in the video game series Ratchet and Clank or as “Johnny Test” in the television series Johnny Test. These are just two of the countless roles Taylor has brought to life in projects for film, television, and video games. With his film Lego DC Comics Super Heroes: Justice League: Cosmic Clash just released and the Ratchet and Clank film set to hit theaters on April 29, Taylor has made sure to keep himself busy sharing his voice with the world.

Earlier this week, Blast Magazine had the opportunity to speak with Taylor about the advantages and challenges of working in a world where your voice is your most well-known asset.

Blast Magazine: During your career, you have played a variety of characters each with their own intentions, expressions, and ideas. When you receive the script for a new project, how do you decide on the voice for the character?

James Arnold Taylor: It varies depending on the circumstances. If you’re doing a movie or a television show, it’s all very much thought out by the writers first and then we go in and sit down to read through it all. We record very quickly and we record all together. It allows us to work the character out but it also allows us to have fun with it in a way that you don’t normally get to, such as with a video game. With a game, you’re just alone in the booth and it’s just you and the director. You get to work out some things but not like this. This is just very different.

Blast Magazine: You have a new movie, Ratchet and Clank, coming out in two months, where you play one of the title characters, “Ratchet”. You have voiced him over fifteen times in the past for his video games. What was the experience like bringing him to life for a movie rather than a game? 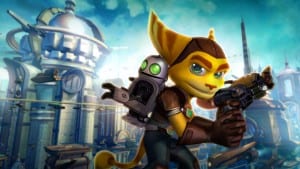 Taylor: I believe I’ve voiced Ratchet in 17 or 18 games. It’s been pretty cool. I was him in everything except the very first game, which was done by my good friend Mikey Kelley. We are now recreating the first game to go in conjunction with the firm that’s coming out. The greatest difference between doing the games versus the film is that when we do the games, I’m all alone in the booth, like I mentioned previously. When we did the movie, we were all together so David Kaye (Clank), Jim Ward (Captain Qwark) and I were all together in the room and it was so much fun. It was very different than the game but we all love working together and being able to work off of each other’s energy.

Blast Magazine: Doing animation, your voice has to be the star as the audience can’t see any physical movements or expressions you’re making. Do you ever feel that it’s a struggle to express yourself clearly just through your voice or do you feel that it plays to your benefit?

Taylor: I actually do feel that it helps me. I feel that I’m able to produce more that way with all of my vocal expressions and I still do move all over the place when I’m doing a voice over. I just love the craftiness of it. All I’ve ever wanted to do was be a voice actor. I’ve always loved the thought that you could look like or be like anything and then get into a booth and become something completely different. It’s one of the coolest parts of animation and it’s also because our imaginations can go anywhere with that and it lets us be kids.

Blast Magazine: In the recently released film, Lego DC Comics Super Heroes: Justice League: Cosmic Clash, you play “The Flash”, a role you have taken on in other Lego DC projects in the past. Is he your favorite superhero?

Taylor: I know that The Flash would be kind of like the obvious answer but truly as a kid, The Flash was my favorite character and I still have all of my Flash comic books. I love The Flash. Green Lantern is a close second and Spiderman is up there as well. I’ve gotten to voice Spiderman in the past and I was a former Green Lantern as Guy Gardner in Batman: The Brave and the Bold but The Flash is my all-time favorite.

Blast Magazine: You have done many projects now within the Lego DC world. What attracted you to that unique combination?

Taylor: It’s a perfect combination. It’s Lego and its Justice League. It doesn’t get any better than that. Also, getting to work with people like Jim Krieg [screenwriter], Brandon Vietti [producer] and Rick Morales [director] is amazing. The crew has such a love for characters and what they are doing. They let us have fun and that’s what makes it so great.

Be sure to watch Ratchet and Clank in theaters April 29 and follow James Arnold Taylor on Twitter @JATactor.