When some aliens capture your crew mates, you must play as nervous engineer Dave Paprovsky as he builds towers to hold back an ever-growing wave of invaders on his ship. To do this, you build defensive towers around your ship as you prepare for the invasion. “Spacejacked” couples strategic tower defense mechanics with frantic platforming into an enjoyable 16-bit package.

Having to worry about your character as much as the computers you are trying to save makes for an adrenaline pumping experience. To help you calm your nerves, there are three types of towers that can be built on stationary platforms littered throughout the three rooms you must protect. Blaster towers give you extra firepower, laser towers provide higher caliber support at the cost of rate of fire, and the pulse towers slow down your enemies, buying you precious seconds to hold back the encroaching wave. These towers must be built and maintained with metal, a scarce resource that can be collected by dispatching aliens or through a mid-mission mini-game. How you spend your metal and what towers you build where determine your fate for that day, forcing full restarts if a particular strategy is not working. You have a little blaster that can be upgraded as well, but relying on it is a fruitless endeavor. “Spacejacked” will have you in a reckless frenzy of trial and error as you face diverse alien threats, constantly keeping you on your toes. 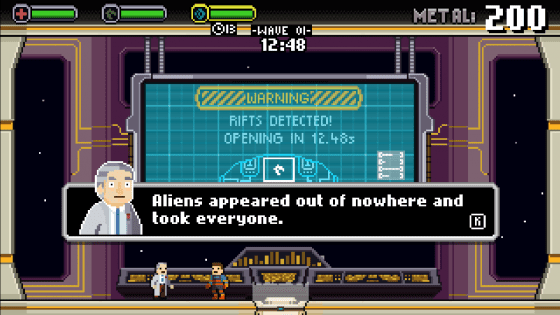 The first part of the game is a straightforward, tower defense mechanic that has you traverseing the galaxy looking for the missing members of your crew. Each room is separated by teleporters and carry over their status from one day to the next. That means that if you were barely able to get through an enemy wave, you might as well restart the day. Having to protect a room that has basically no health when you are running out of metal is nearly impossible. The random spikes in difficulty didn’t help either, as certain days took me way more restarts to figure out than others. This contrasts with the relatively easy second part of the game, where you have to defend a single computer terminal in the center of a maze of rooms. Metal ends up being much more plentiful when you are not repairing busted terminals and your turrets start finally earning the necessary upgrades. 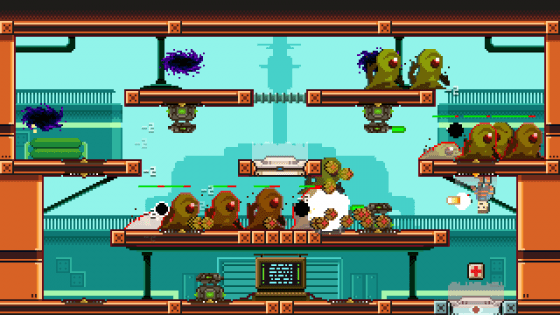 Maintenance will be your first and foremost job, making “Spacejacked” feel like a platformer with some serious resource management more than a straight up tower defense game. While your metal is the most pertinent director of how successful you will be, sometimes where you decide to shoot with your blaster or how quickly you can get from one room to another can seriously tip the balance in your favor. This adds a certain element of luck and reflexes to a generally strategic genre. There is no time in your three hour long venture that you will be able to sit back and let your turrets do all the work. It made Dave’s hilarious quips of “I did not sign up for this” resonate even more with me.

When you finish the campaign, an optional challenge mode will test you abilities. Asking you to beat a level without firing your blaster or dealing with a particularly nasty brand of alien gives “Spacejacked” a deeper level of challenge for those curious enough to try it. 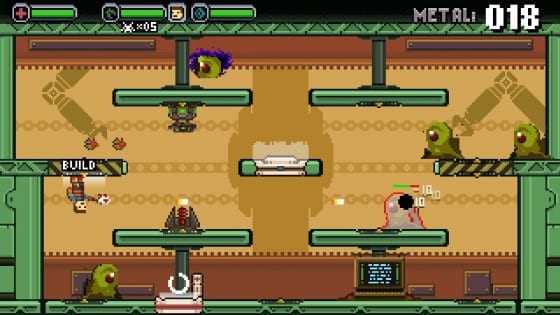 Aside from the mostly enjoyable, but brief, gameplay the best part about “Spacejacked” is the retro art style and overall sense of humor. The game fully embraces its 16-bit roots, and delivers a rocking soundtrack to accompany the creative art style at play. This goes hand in hand with genuinely funny dialogue and a cast of characters that you actually care about from your minimal interaction with them.

Although “Spacejacked” might not satisfy the strategic itch many tower defense games aim for, its contagious charm, frantic action, and inventive design are sure to keep you entertained for its short duration. The game does get unnecessarily hard at certain points and having to re-do days after you have actually beat them can be a hassle, but I never felt like not playing due to frustration. At the end of the day, it costs ten bucks and its a great time if you like these sort of games.