Troy Baker has been a very busy man. In the past year, he has worked on seven films, six television shows, and eleven video games. From superheroes and robots to villains and aliens, Baker has become well-known for his versatile and talented voice performances. His most recent film, Lego DC Comics Super Heroes: Justice League: Cosmic Clash, focuses on the story of Brainiac, a super-computer plotting to take over Earth. After Brainiac sends members of the Justice League to other time periods, the remainder of the team must work together to save their friends. In this project, Baker can be heard as Batman, a character he has played in multiple LEGO iterations in the past.

At the New York premiere for the film, Baker spoke with Blast Magazine about his experience portraying one of the most well-known superheroes in the comic universe.

Blast Magazine: In Lego DC Comics Super Heroes: Justice League: Cosmic Clash, you once again voice the character of Batman. During your career, you often voice strong characters, many of whom are villains or anti-heroes. What attracts you to those dominating roles? Is it a conscious decision to play those characters or are those the roles that are offered to you?

Troy Baker: I don’t know. I guess it’s more of what’s been given to me. I try to find a little vulnerability in every character I play. It’s interesting because I think all actors are inherently insecure and so maybe the real acting is that they get to play these very confident characters. That’s a great question. 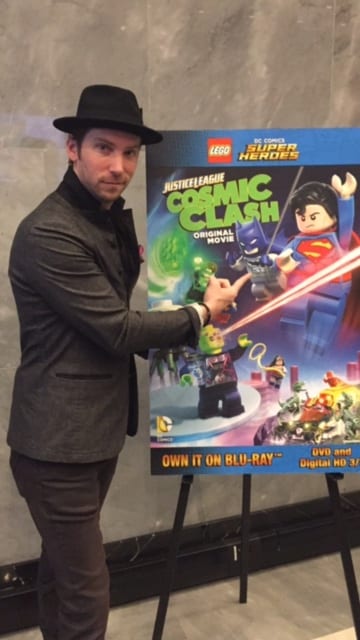 Blast Magazine: Would you say that Batman is your favorite superhero?

Baker: He is. That’s my first graphic novel that I bought as a kid. I’m probably more invested in that DC storyline, the true DC Detective Comics line, than anything else.

Blast Magazine: You have also played a number of well-known video game characters in the past, including Joel in The Last of Us. How does your creative process differ when working on films vs. video games?

Baker: I kind of look at myself like I have a toolbox and I just come to work and whatever tool I need for the job, that’s the one I use. When you’re doing a game, especially one with full performance capture, it’s more like theater. With this, it’s really about trust because when you’re doing less, you want to do more with it. When you have a story like this and characters like these, what am I going to do that is going to make Batman cooler or better or smarter? You just really have to get out of your own way and trust the script, trust the directors, trust the producers, and trust the cast.

Blast Magazine: How did you prepare to take on the role of Batman in this film?

Baker: In this movie, Batman is Dean Martin and he’s got all these Jerry Lewis’s floating around him, so it’s really about setting up the joke, getting out of the way, and letting them do the slam dunk. I’m more about the assists than anything else but at the end of the day, as long as we win the game, that’s all that matters.

Blast Magazine: I read that your audition for the character Pagan Min in Far Cry 4 included some great improvisation. Do you prefer to work on projects where there is a strict, set script or where you are encouraged to add your own opinions?

Baker: There’s an interesting experiment that someone did where they took a herd of cattle and they gave them no fence and the cows actually gathered together and they wouldn’t explore. However, as soon as they put a fence up, they went all the way out there in the pasture. I think we’re the same way. I think that we need parameters that allow us to have the freedom to explore, but without those parameters, without the structure of a good script, good directors and a good cast, you wouldn’t actually do anything. We have a great script and we have a team of people that trust their cast to have fun with that line and do whatever we want, but ultimately we know how they want it to be. This is our 3rd or 4th movie now, so I think that everyone feels a lot more comfortable with one another but at the same time, if it ain’t on the page, it ain’t on the stage.

Blast Magazine: Besides being a talented actor, you are also a very skilled musician. Your album, Sitting in the Fire, is a great collection of music filled with emotion. Can we expect to see another album from you soon?

Baker: We are talking about it right now. We are currently writing so hopefully we will have something soon. It’s always something that I want to do and I can’t stop making music. It means a lot to me that it meant something to you.

Blast Magazine: You have had the unique opportunity on some of your projects to combine your talents by both acting in video games and performing on their soundtracks. Is that something you are interested in doing more of in the future?

Baker: I never want to break the fiction for anybody. I never want anyone to wonder why Joel is singing. Well, actually that would make sense, but I don’t want to put myself in something like that just for the sake of doing it but if it’s ever appropriate, definitely. The ultimate dream is to score something that you’re in.

Lego DC Comics Super Heroes: Justice League: Cosmic Clash can be purchased on Blu-Ray and DVD and Troy Baker can be followed on Twitter at @TroyBakerVA.