When I played in my room as a kid, I imagined that I was able to bend time and space in order to off the bad dudes I was fighting against in my mind. Partially due to watching “The Matrix” and probably too many episodes of “Dragon Ball Z,” I knew these fantasies were only possible in my mind, pulling off some impossible acrobatics while killing countless goons. As I grew up, I looked for more realism in my video games, asking developers to get as close to photo-realism as possible and deliver the most true to life combat simulator I could ask for. It seems that I had forgotten what my 9-year-old self wanted all those years ago. “SUPERHOT” is here to remind me.

Within its bland, white walls and faceless red enemies, “SUPERHOT” proudly follows one simple rule. Time only moves when you move. 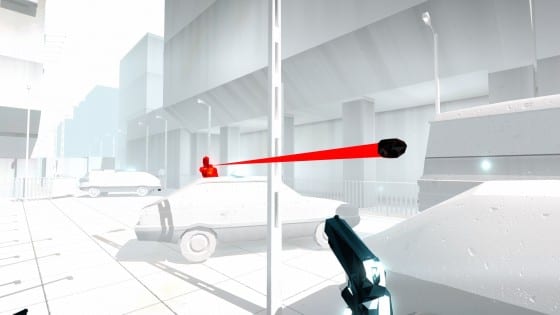 This mechanic allows you to pull off incredible feats of wish fulfillment as you battle your way through 25 different levels. Bullets slow down, letting you dodge them without breaking a sweat all while planing your next move. Getting close enough to an enemy will let you punch them, sending their weapon flying through the air for you to grab and finish them off. When you run out of bullets, simply throw your gun at an enemy and look for another, more viable weapon.

Surrounding all this carnage is a pretty captivating story. Your computer is transformed into an 80’s style interface where you receive a message from a friend urging you to play “SUPERHOT.” If you choose not to launch superhot.exe, there are plenty of other cool things to see in the menus. Quirky little programs and demos will bring a smile to the face of anyone who has used one of these computers before, further implementing the notion of outright nostalgia scattered throughout the game. 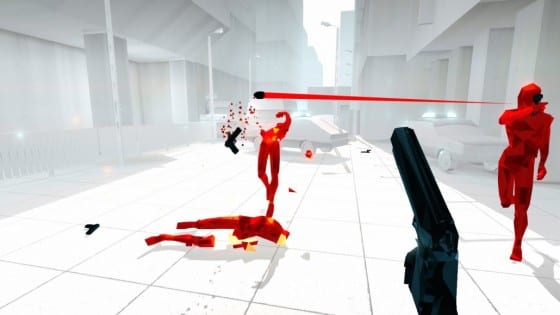 Visually, the world of “SUPERHOT” is a bland, white environment littered with polygonal red dudes that are only there to be gun fodder. Blasting one of these guys will launch them into a shower of glass, an effect that never gets old to see. Witnessing exploding glass heads and outright dismemberment does hearken back to the ultra-violent nature of games like “Hotline Miami” but the lack of any actual gore might keep the censors happy. It is a stylistic choice that helps make “SUPERHOT” an incredibly original game.

Each level is set up as a sort of puzzle. You are spawned in an area with a set number of thugs around you and have to dispose of them in the most efficient way possible. Often times you won’t have a weapon in hand and have to find one. These quickly became my favorites as I had to throw bottles from a bar at the incoming aggressors or find a way to get to the katana sitting in the back of the room without getting killed. Successfully finishing a level shows you a real-time replay of your time bending escapade and is the highlight of the experience. However, the biggest gripe I have is that some situations only have one discernible answer. For all of the creativity that goes into the majority of the levels, running into these seemingly scripted sequences took out of the otherwise outstanding package. At the same time, are there that many ways to dispatch three dudes pointing a gun at your face in an elevator? 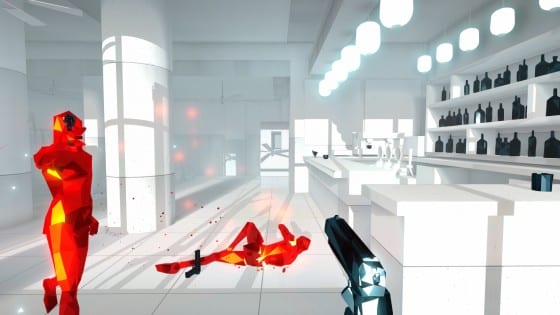 Once you figure out the best course of action for any situation, the game becomes pretty easy and you will likely fly through the later levels despite the increased number of baddies. “SUPERHOT” does not overstay its welcome, with the main story wrapping up in about two hours. Its a pretty cool narrative filled with fourth wall breaking moments, but I feel like it could have been fleshed out further. Beating the game will unlock a series of timed challenges and speedruns but the content is still a little shallow. It helps the core of the game feel novel throughout the whole experience but I couldn’t help but ask for more once it was all said and done. Still, at $20 its a little more than the price of a movie and will entertain you more than your average blockbuster.

“SUPERHOT” started out as a 7 Day First Person Shooter jam project by a group of friends and quickly received the attention of the gaming world. The final product might be a bit lacking in content, but it never ceases to entertain you. Every time I decimated a room of dudes in my first try I felt like a badass. It has a tightly wound story, enjoyable levels and unique look. The only thing wrong with it is that I wanted more. Still, the outright creativity found in its very basic mechanic makes it a must play for any fan of the genre.