Is there anything more predictable in life (other than death and taxes) than the release of a Coen Brothers movie? It’s something that happens either in late winter or spring –before big summer movies— or in the lull of autumn prior to the holiday rush. You can set your watch by it, and if you don’t wear a watch anymore (I stopped ten years ago), you can calibrate your I-Phone to it. 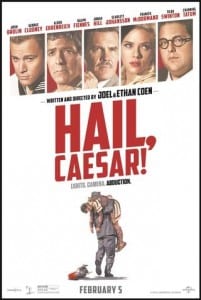 In the case of Hail, Caesar!, the Coens’ latest movie, it opens in February, just a few weeks shy of the Academy Awards. At this, I’m scratching my head, because Mad Max: Fury Road has earned a best picture nomination, and a movie like Hail Caesar!, which is far superior, will surely be left out of consideration when the Oscars swing around in 2017.

I’m not that down on Mad Max. It was fun, but it lacked depth. I’ve always wondered how deep the Coen Brothers actually are, and I finally think I’ve figured them out. Their movies have a lot of sound and fury which signify nothing, but that is just the point and the genius of their work.

Their best film, in my opinion, remains Miller’s Crossing. Yes, Fargo and No Country for Old Men are darned good, but Miller’s Crossing is on the top of my list, and Hail, Caesar! reminds me quite a bit of the latter.

On the surface, this would seem an odd comparison. Miller’s Crossing is a Prohibition-era set gangster tale, while Hail, Caesar! is a comedy that takes place in 1950s Hollywood. But both films feature a ‘fixer’ who weaves his way through a contorted world of hustlers, screwballs, heavies, and dames trying to make a small slice of a crazy world sensible. You don’t know what these men really want and the plots of the films are afterthoughts. The Coens revel in types and caricatures, but they have a knack for making wholly original what we already know. It’s not mere parody, like a Saturday Night Live sketch, but taking a cartoonish figure and making him or her sincere and meaningful—a kind of bathos in reverse if you will.

Such is the romp that is Hail, Caesar!, which follows Eddie Mannix (could there be a more hard-boiled name than that?), head of production at a fictional movie studio in the 1950s, whose task is to keep films on time and on budget. Seems simple and pedestrian, right? Not at all, as Mannix, played by Josh Brolin, endures a punishing schedule dealing with soused leading men, pregnant starlets, prickly foreign directors, miscast players, indignant gossip columnists, subversive writers, and on top of it all, the kidnapping of the studio’s most prized actor. This allows the Coens to explore every genre of classic Hollywood filmmaking, as we ping pong from set to set where the following movies are being made: a cinemascope Roman Epic, a dinner jacket black and white drama, a B-level cowboy movie, an Esther Williams-esque swimming spectacular, and a Gene Kelly-style sailors in tap shoes musical. And through all of this a narrator –meant to sound like Orson Welles voicing King of Kings—mockingly describes Mannix’s travails. You couldn’t get a better history lesson of movie-making in the 1950s.

What does it all add up to? Heck if I know, but it’s playground where the Coen Brothers demonstrate their great skill with dialogue, character, and physicality. This last point bears elaboration.

The Coen Brothers love faces. Funny faces. Square jaws and jowly necks. It’s another reason to recall Miller’s Crossing, where the rough and round and sallow visages of hoods, molls, and gunsels were insistently featured. This is no less the case in Hail, Caesar! where you can see the Coens indulging their obsession with that peculiar melon that rests on our shoulders.

It’s the Coen Brothers irreverence that stamps their work. The medium is the message for them, and the message is chaos. Life is out of control, and their world-weary players, despite the pose of ennui, love being in the mix. In a world where nothing is predictable (save the release date of a Coen Brothers movie) we don’t give up trying to command our corner of it. See this movie and enjoy the absurdity of the struggle.