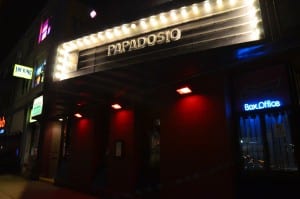 For fans of electronic music, Papadosio is changing the game. Hailing from Asheville, North Carolina, this five-member group combines elements of electronic music, rock and alternative to create a truly modern sound. Live, they operate almost like a jam band- building off each other’s energies and improvising large portions of their set. On November 14, they played Boston’s Paradise Rock Club, delivering a tight, finely executed set that highlighted their variety of musical influences.

Opening for Papadosio was a producer who goes by the name of Thriftworks. His set was beyond impressive – Thriftworks seemed to have control of the crowd as he dropped his unique style of futuristic, industrial beats. This producer’s sound design is impeccable. Not only did he play almost entirely original tracks, he lived his music, expressing intense emotion and care for each bit of his set. As an opener, Thriftworks was exactly what the crowd needed: an energetic, fun yet immersive DJ set.

After a 30 minute break, Papadiosio was on. Their set was technical, well-timed and dynamic, often delving into lengthy jams before circling back to the main melodies. They played a large portion of songs from their new album, as synchronised visuals flickered in the background. The best part of Papadosio live is the large variety of music they bring to the table. From relaxed, listening music to intense, almost symphonic electronic pieces, Papadosio is perhaps one of the most versatile live bands touring as of late. The stage was entirely covered in the band’s instruments. Dozens of different guitars, basses and synthesisers are at their disposal during a set, plus the tens of dozens of pedals and effects racks. After the set the audience was in awe- new fans and old were brought together to experience an amazing night at the Paradise Rock Club.

Blast was able to sit down with the band before the show to discuss their live setup and how each member contributes a unique element to the group into their newest album, Extras in a Movie.

What inspired the name ‘Papadosio?’

Anthony Thogmartin (guitar, vocals, producing): We picked that name because it doesn’t sound anything.

What is it like playing at festivals? Can you tell us about a recent festival experience?

Thogmartin: Camp Bisco- there was a double rainbow after our set was pushed back due to rain.

Who is the craziest member of the group?

Let’s talk about your most recent album, Extras in a Movie. What was your inspiration for the album?

Thogmartin: It was all over the place. We hadn’t released anything in a few years. Our biggest inspiration was probably being on the road and really wanting to write new music. 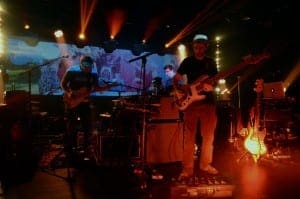 Do you have normal studio habits? How did you manage the engineering and recording process for the album?

Thogmartin: When we were recording the album, January through March, there were people in and out of the studio pretty much every day. We rented a house in Asheville that had a really awesome sound to it with a nice view and atmosphere. We do all our recording ourselves.

Do you engineer your own tracks? Do you use more live instruments or production?

Thogmartin: We mix everything and send it off to be finished, just to clean up our mess. This time around has more live instruments, actually, last time around as well. Our previous album was all recorded live at Rob’s house. That was more of a collection of songs we wanted to play live. In retrospect we call it an album but at the time we didn’t want people to think it’s an album because we had been playing those songs live forever.

Describe the writing process for the band. Do you noodle around, improvise? Do you write songs knowing what they’re going to sound like ahead of time?

Sam Brouse (keyboard, vocals): It really depends. If you’re lucky, you have an idea in your head. Anthony will have an idea in his head and just record it on his phone, whereas I tend to not work like that. I’ll usually just sit down at a piano and play something out, then if it sounds good, I have to record it, or else I might forget it forever.

Thogmartin: I physically hear ideas. After doing this for so long, I can pretty much put the sounds I hear in my brain on tape and figure out the instruments to make it work. It’s pretty much all technical when it comes out. Everybody gets music in their head when they walk around, a mashup of everything they’ve been hearing, or for musicians maybe things they’ve been playing. The difference between a musician and a normal person is a musician figured out how to get it out of their heads.

Brouse: Anybody who can play music can write songs, it’s just a matter of taking the time to do it.

Rob McConnell (bass): I’ll write a song a year because of that. I play bass all day but I don’t write music all day. We do a lot of improving, so I feel like I need to save up ideas for that. It’s like writing a song on the fly.

Thogmartin: It’s amazing, Rob probably creates the most new riffage in a live environment. He really is a creative outlet in a live sense. Every member is contributing equally, differently.

Let’s move on to your live setup. How do you coordinate your performance while on stage? Describe your system for keeping everything in sync.

Thogmartin: We run Ableton Live and we also have a talkback system. Nobody can hear the talkback except the band and the crew members. We’ll coordinate our improvisations like that. Before that we had hand signals and facial expressions, eye contact. Way back in the day we used to make these strange, weird faces we would make to each other. We’re way more professional now. 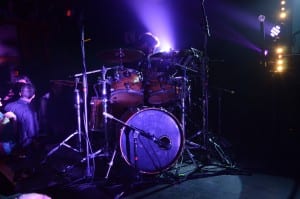 Mike, we noticed a few drum pads included in your kit, how do you use those live?

Mike Healy (drums): Those pads are actually MIDI, and those are synced as well. Anthony controls what the pads do, so he can actually remix me on the spot. I can stop and start loops, use electronic drums, essentially anything.

So you can do whatever you want because it’s MIDI?

Thogmartin: The pads don’t generate sound themselves, they’re just MIDI, so we can send those MIDI commands across the stage back to my computer which has more access to different sounds. We could load an 808, or a saturated electronic sort of thing.

Let’s discuss the reception of Extras in a Movie so far. Did you go straight on tour after the album release?

Thogmartin: We started the tour at the end of September. We came from Boulder for a couple nights, then down south. We just played New York last night.

Do you have any plans to travel internationally?

Thogmartin: We’re headed to the Dominican Republic for a festival, but otherwise that’s mostly it. We’re trying to figure out how to get our music heard more overseas, trying to link up a small run in the future. We really want to go overseas but don’t really have plans yet.

Brouse: It’s hard. A lot of DJs can really go wherever they want because there’s one person. We have eleven people that need to go. It’ll happen someday we just need to meet the right production company or promoter and get larger listener base over there. 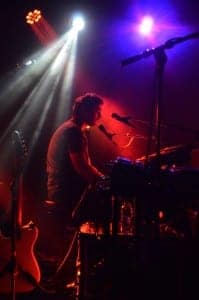 This album is very professional and versatile. It has the potential to become commercially successful. What has the album stirred up so far?

Healy: We’re definitely getting a lot of new fans at the shows. We’re really breaking into a new audience and people are hearing us for the first time, hearing us on some of the singles.

Brouse: Some people get it and some people don’t. That’s always going to be the case and we knew that. Honestly that was another inspiration for a lot of the songs on the album. We really pushed the envelope for what people were expecting.

Do you think you have a type of listener? Who would you imagine would listen to Papadosio?

Brouse: All different types of people. We don’t really want to discriminate. We by and large, even with this album, try to reach out with it and break out of a box that’s being created around us like, ‘hey you guys are an electronic band or you guys are a jam band’. In many ways we would like to reach out to pretty much anybody, we don’t really care who’s there, unless they’re crazy, mass murdering, heroin-slinging people.

This is a really important question *Puts refraction glasses on Chris* What do you see?

Brouse: I see a lot more Mikes and Billys than I would like. Do I get to keep these? These are mine now.

Brouse: I think I would throw up if I performed with these on.