As soon as I left the claustrophobic walls of Vault 111, all I could think about was making my way down towards Boston and discovering all the sights and locations Bethesda had imaginatively recreated in their massive open world game. I spent hours simply wandering around the eastern part of Massachusetts trying to not get killed and visiting places I had been to several times in real life. And while things around me may have looked the same and felt familiar, I realized this world had vastly changed.

That’s the magic of Fallout 4, a game that takes place in a post-apocalyptic future with a faint familiarity of the past that makes you feel like you’re rediscovering a world you thought you knew so well. This feeling is echoed by the game’s protagonist, a character from another time who needs to make sense of the way things are now in a desolate future, and it is also shared by the game’s format which is similar to past Bethesda titles. It’s a game that weaves several stories together and gives you so much to explore that you just can’t help but get lost in it all. And when you do finally remember what it is you’re supposed to be doing, you find another place, a new mission, or even just another wanderer who distracts you from your main objective. This familiarity coupled with a bustling new world to travel through makes for one heck of an adventure that pulls you in no matter what you decide to do.

Fallout 4 is massive, and you truly have your hands full when it comes to exploring every corner of its environment. The Boston of the future known as the Commonwealth still has many remnants of the past, and anyone who is familiar with the city will appreciate the accuracy of several locations and their charming details added here and there. Places like the Old State House, Bunker Hill, and Fenway Park make an appearance but have been repurposed into new buildings that fit in their post-apocalyptic setting. And it’s everything else that’s added in between that makes playing the game feel so hearty. Even when you think you’ve found every known location on the map, you’ll go on a mission and realize there a few dozen places you haven’t visited yet. The map won’t list every building you can go into, so you may accidentally find a new landmark just waiting to be looted and explored. Surprises like these are just waiting to be discovered.

Despite having been destroyed and left in a crumbling state, the Commonwealth itself is quite beautiful and features a gorgeous palette of colors, lights, and sounds that showcase its splendor. You can’t help but feel hopeful during the day looking up at that bright blue sky or wonder what’s lurking underneath all those shining stars at night. Calming bells and strings provide the soundtrack to when things are safe and secure but the music quickly escalates into a clash of instruments whenever an enemy approaches you and takes you away from admiring the sights. And as unpredictable as New England weather can be, the game’s new weather system will occasionally send down a heavy downpour, thick fog, or even a rad storm that engulfs everything around you in a menacing green cloud of radiation. It all makes the Commonwealth look and feel alive and radiant, but occasional graphical hiccups do mar the experience when you’re trying to get from one place to the next. A handful of times I encountered glitches that made platforms disappear and made my character walk through walls and surfaces—nothing game-breaking by any means, but don’t be surprised if one catches you by surprise.

Themes of family, alliance, and hope resonate through the many available quests, but it’s the primary one that has you searching for your kidnapped son that does a great job of reorienting you with your surroundings. This main quest provides somewhat of a tour around the Commonwealth and takes you to places that are sure to catch your eye. You are never obligated to complete any quest you don’t want to so you can simply ignore your main mission and spend time doing side-quests for experience, equipment, or for some extra spending money. Quests that have you searching watery ruins for baseball memorabilia to exploring an old witch museum to even looting an old comic book store for a superhero costume provide a nice change from the usual killing mission. Luckily there’s enough variety in there to keep things fresh.

New to the series, Fallout 4 also features fully voiced dialogue. This allows your conversations to come alive while still providing you with options as to how you want your character to be perceived. You can choose the sarcastic route and say something witty and off-collar to shock your allies, or you can behave like a true “Masshole” and be a jerk to everyone you talk to. Sometimes you may even get a chance to persuade characters, allowing you to bypass certain mission requirements or even combat altogether if you succeed. You no longer have a karma system that tracks your good or bad deeds, but your actions do affect the way characters behave towards you and even the availability of certain missions. What you choose to say is still as important as ever. 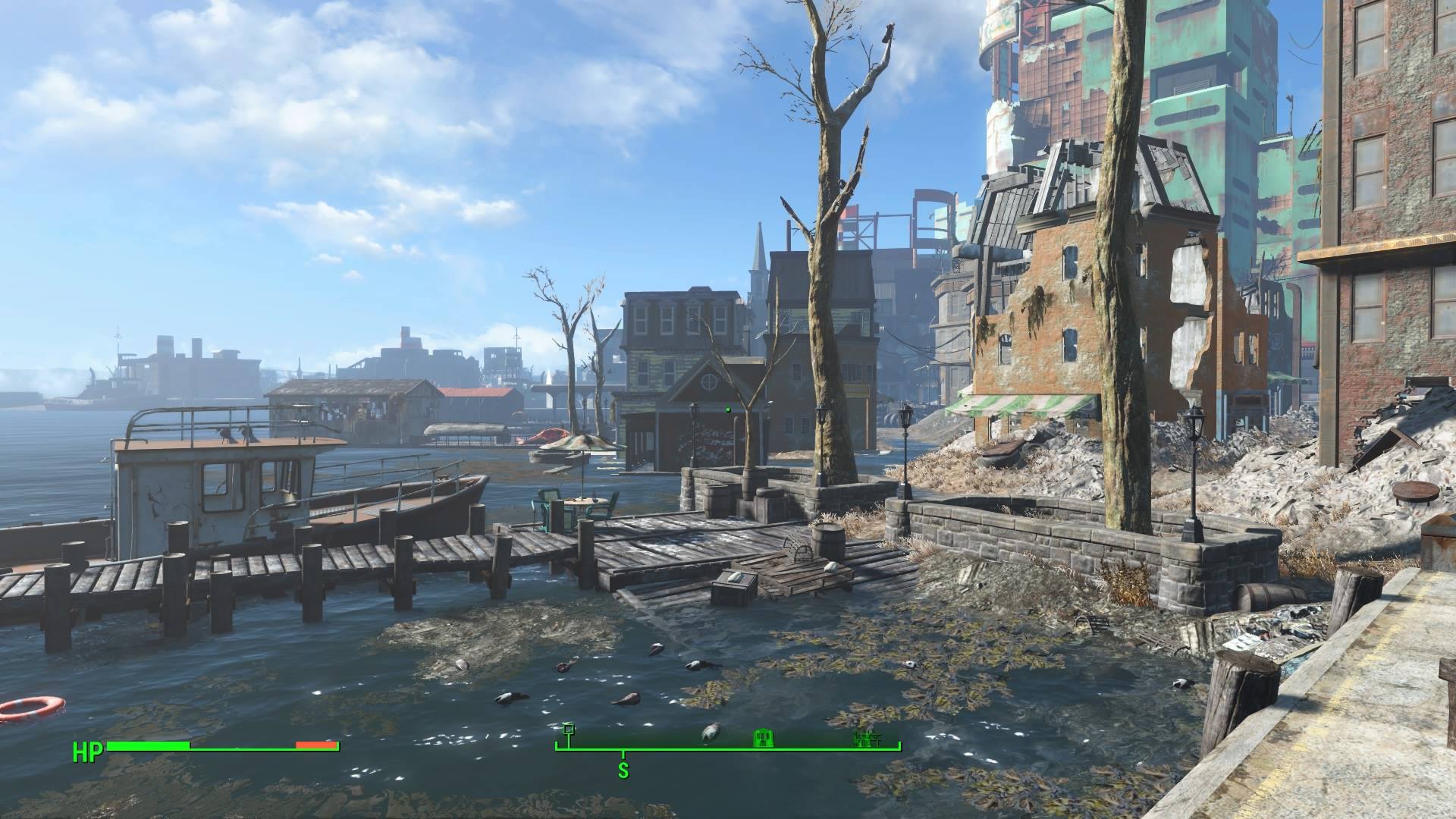 Further allowing you to customize your play style is the game’s newly condensed perks system that lets you choose a perk every time you level up. Perks now come with various ranks meaning you can spend your points focusing on increasing each one until it’s maxed out, or you can hop around and unlock different ones instead. For example, you can increase your Stealth perk until enemies no longer hear you when you run or you can max out your Lead Belly perk if you want to eat and drink anything without worrying about radiation poisoning. On the other hand, if you’d rather open up new perks, you can spend your points on your overall stats instead to boost your character’s strength, perception, and more. You essentially have more options than you had before to create someone that plays to your liking.

Likewise, combat is a lot like in past games but with a few changes. Fallout 3’s handy Vault-Tec Assisted Targeting System returns, but instead of pausing the game completely to allow you to aim at the different body parts of your enemy, it now slows down the action, meaning you can’t just sit back and relax. This makes combat a lot more hands-on even when you do decide to use V.A.T.S. for some added assistance. It’s unfortunate that you still can’t aim at specific body parts with melee weapons to cripple them in style, but that feature is still only for long-ranged attacks.

The added crafting system allows you truly create any weapon you want and modify it to your liking. All that junk you pick up during your time roaming around the Commonwealth can be used and recycled for different mods to your weapons. Guns can be improved by changing their parts, melee weapons can be made stronger by attaching sharp materials to them, or your can simply customize your favorite weapon by giving it a name or a new coat of paint. The same can be done with armor, and what’s even more gratifying is actually seeing your character wearing that odd-looking piece of armor you spent so much time creating. It may look weird, but you can bet it’s a lot stronger than the default armor you find lying around. 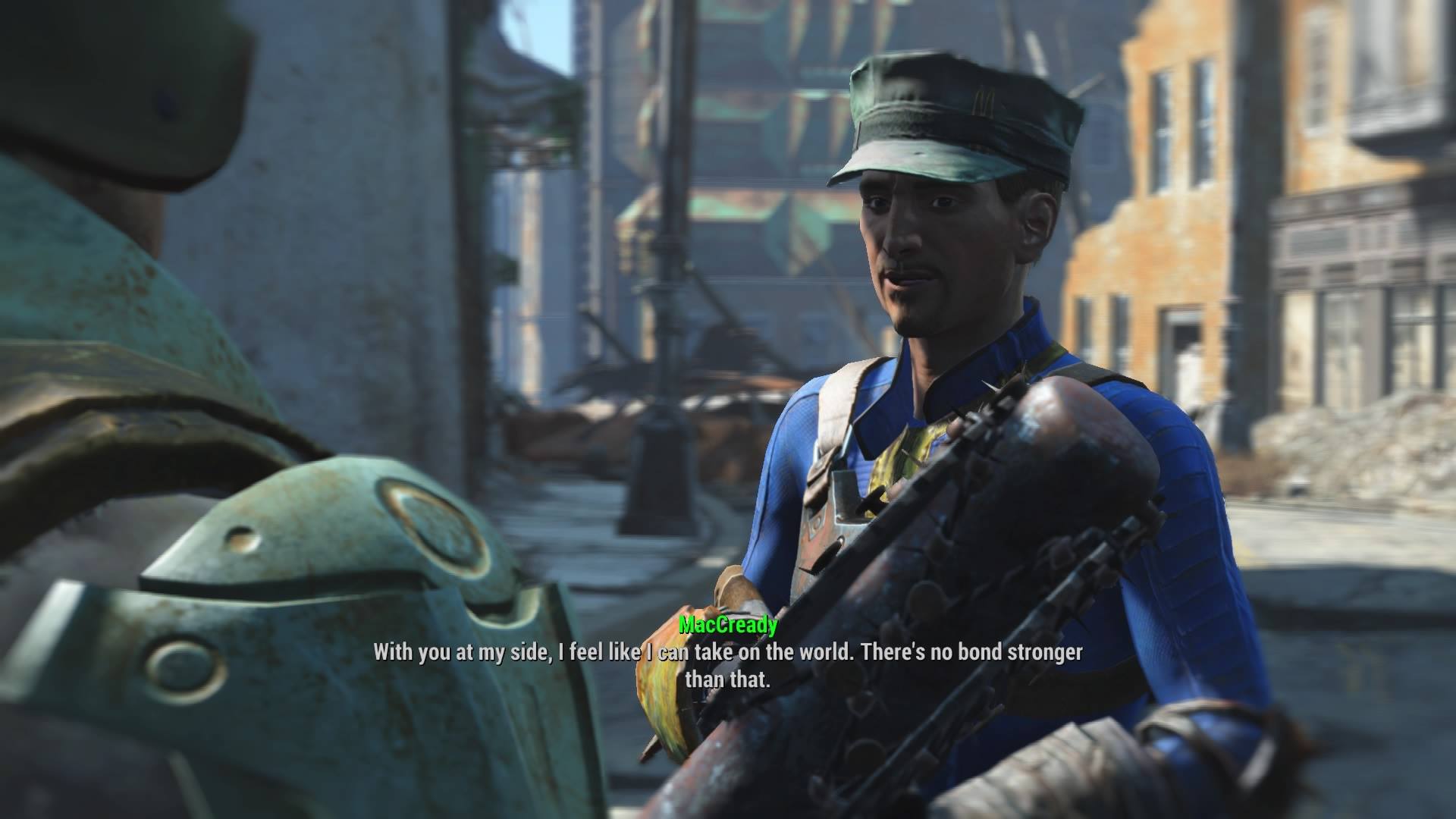 Crafting can also be utilized to create buildings and large-scale objects to use in the settlements you can run. Some towns can be liberated and then turned into cash-producing gold mines as long as you take the time to care for them and provide them with the resources and protection they need to survive. Build power generators and hook them up to your turrets for some defense or simply build beds for all the settlers your new town attracts. It plays a bit like any other civilization management game (think Fallout Shelter) and it’s entirely optional. You don’t have to spend time messing around with all that junk you find, but if you want everyone in the Commonwealth to look to you as their hero, you have some serious building to do.

As you make friends and complete missions, you’ll also run into people (and other non-humans) that want to walk at your side into battle. The way you behave while they’re with you—your actions, what you say to others in dialogue, and even how you complete certain missions—can impact your overall relationship and their fondness for you. Everyone’s friendship can be maxed out if you figure out what their likes and dislikes are, and you can even romance any human companion you’re with. Doing so can also be a strategic move as you’ll gain a special perk only they can give you. Whether you choose to travel the Commonwealth alone or with a companion is totally up to you, but the added protection, side-quests, and entertaining conversations make your journey a little less lonely a lot more fun.

And that’s the great thing about Fallout 4. Everything in the game aside from your main quest is entirely optional but everything you do will grant you some experience points to keep you doing it again and again. You’ll gain points for sniping down an enemy, building a lamp for your settlement, successfully lock-picking a door, or simply walking around and discovering locations on your map. They all may be optional, but you’ll regret not trying to do them all.

Everything you do rewards you with something and it’s that reward that will keep you hunting down side-quests and leveling up your character well after you complete the game’s final mission. Fortunately, you can keep playing after you watch the ending credits roll, and considering how much there is to do in this game and how gratifying it is to do it all, there’s no shame in sticking around afterwards. Fallout 4 is one of those games that will make you happy that you did.

Fallout 4 is available for PlayStation 4, Xbox One, and PC. A PS4 copy of the game was provided for the purposes of this review.