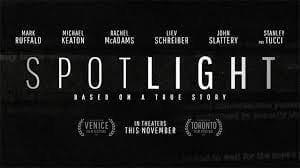 Begging pardon for the clunky Dickens tribute, what the heck do I mean? In September of 2015, the movie Black Mass took the city by storm. My review is here. In that film, the corrupt relationship between law enforcement and organized crime in Boston, not to mention, nefarious familial loyalty, was laid bare. It was the quintessential Boston movie until Spotlight came along in November of 2015. Spotlight one ups Black Mass in the Boston category, as it depicts “The Boston Globe’s” efforts to uncover the Catholic Church’s white-washing of sexual abuse by priests. Yet again, we are invited to peel back the onion on venerated, Boston institutions and find the stench is unbearable.

Since Massachusetts began to take off as a film-making destination about 20 years ago, I can’t recall two such prominent films (both certain Oscar contenders), in which Boston itself is a character, released in the same year. It’s a remarkable achievement, even as we are appalled by the subject matter. We celebrate the fact that movies like Black Mass and Spotlight don’t begin with a tranquil shot of the Charles River only to cut away to film sets in Canada—where the bulk of the movie is really made—but at the same time, we blanche as we realize these terrible things occurred here, under our gaze (or lack of gaze as both films make clear).

O for the days of yore when movies such as Good Will Hunting and Fever Pitch highlighted Boston’s idiosyncrasies playfully—joyfully! Not so anymore as we now must face down our demons.

Demonic might be the only way to describe what happened with so many children, over so many years at the hands of pedophile priests while the Church looked the other way. This is the story which Spotlight takes on.

The title of the film refers to the investigative team of journalists at “The Boston Globe,” who periodically shine reportorial spotlights on issues important to the city and region. The film community in Massachusetts knows this intimately, as the ‘Spotlight’ team, in 2009, exposed the boondoggle that was Plymouth Rock Studios, a planned movie studio in Plymouth, Massachusetts that ended up being akin to a real, con-style movie, The Music Man. If you are a fan of The Simpsons, the monorail episode is your reference.

Going back to the early 2000s, ‘Spotlight’ looked into the sexual abuse scandal in more depth. Allegations and prosecutions had been ongoing for years, but until the ‘Spotlight’ series came out, no one realized how truly widespread and awful it was. The Catholic Church had been actively covering up the crimes of priests, shuttling them off to other parishes when the horrendous acts were discovered. As in All The President’s Men, the cover up went all the way to the top. In Boston’s case, Cardinal Law, the most powerful priest in the region, had been running interference for years.

Spotlight lays out this story with excellent pacing, even if at times the many facts, dates, and names thrown at the viewer are confusing. No matter, because the big picture is what’s important, and in this regard Spotlight is superior to Black Mass.

Black Mass was a muddle because the entire story of Whitey Bulger, his brother Billy, and shady FBI-man John Connolly could not be told in two hours. Black Mass the non-fiction book, also the work of “Boston Globe” reporters (though not a Spotlight series), was a massive tome which could never be condensed easily into a theatrical film. Spotlight seems to learn from this mistake and takes a long and somewhat pedantic story and stream lines it crisply and smartly for viewing audiences.

There is a price to pay for this and that is characterization, as we rarely get anything more than cursory glances into the lives of the reporters on the story. It’s a shame because the Spotlight cast is first-rate, with solid performances from Michael Keaton, Mark Ruffalo, Rachel McAdams, Live Schreiber, John Slattery, and Stanley Tucci. Indeed, Tucci’s Mitchell Garabedian, the only non-journalist character in the movie that stands out, is the most fully formed and interesting player in the whole film. Garabedian is a lawyer who has for years represented victims of priest abuse, but Tucci plays him as paranoied of mind and vindictive in agenda. It’s a supporting role but perhaps the most convincing in the movie. Naturally, most of the focus of Spotlight is the journalists, but they are so busy racing from editorial meetings to courthouses to victim interviews we rarely get to know them personally.

This point, in my opinion, does not really harm the film, but it may prevent it from being considered one of the greats in the genre. What also might hold Spotlight back is its bland canvas. Spotlight gives you the facts of the case, but it does not do so in a uniquely engaging way that a film like Oliver Stone’s JFK did. Spotlight is a docu-drama without any of the flash or grainy images of the former, so there is little that is memorable beyond watching the case unfold. The only true nod towards mise en scene is the conspicuous presence of churches, which always seem to be hovering and looming over –or oppressing—what lies beneath them.

In one way, I hope Spotlight comes nowhere close to imitating JFK. As watchable a movie as Stone’s was, it was filled with distortions, creative edits, and outright lies. I don’t think Spotlight goes down a similar rabbit hole, but it’s a Hollywood movie: how do we know what is true, poetic license, and fabrication? I’m no expert on the case, and on the surface it appears the film gets the facts right, but I hope audiences will not blindly accept all they see. No one, myself in particular, wants to defend the Church, but in a rush to score ideological points against Roman Catholicism (an institution not beloved by the Left and Hollywood) are any inconvenient truths set aside?

Which brings me to the stakes of Spotlight. I reviewed the trailer a few weeks ago and noted the filmmakers attempt to sell it as a quasi-thriller. Spotlight is in no way that kind of movie, and though it’s a must-see film this award season, the promised thriller aspect never materialized. The script constantly alludes to the Catholic Church’s power in Boston, and we get the sense something diabolical is coming. Someone on the ‘Spotlight’ team might lose their job. Someone may be physically threatened. Indeed, throughout the movie hints are dropped that “The Boston Globe” knew about the extent of the scandal years ago but did nothing. We are teased to think someone on the team or inside The Globe is a fifth-columnist for the Church. But nothing ever comes to pass, and the explanation given for the lack of due diligence years prior is weak tea.

There are side notes of interest in the movie, as well. Spotlight, oftentimes humorously, gives us a glimpse into how reporters worked pre-internet. The events of the movie play out in the late 1990s and early 2000s, just before the internet exploded, and we come to understand just how hard reporters had to dig back in the day. No Google or Wikipedia to find an answer in seconds. Newspaper clippings, dusty archives, and, ipso facto footwork were these folks’ stock and trade. It makes you appreciate what dogged reporting was all about before the age of the internet.

Much has changed in the world and in Boston since those days. Whitey is in prison, as is John Connolly. Southie has gone luxury condo. Cardinal Law resigned and fled to Rome. Are there more cinematic skeletons yet to unearth in The Hub’s closet? Whether yes or no, as 2015 comes to a close, it cannot be denied the past year was a remarkable one for Boston on the silver screen.