Let’s get the film history out of the way first. Alfred Hitchcock’s thriller Rope (1948) famously had only a few editing cuts throughout its 80-minute running time. Orson Welles’s Touch of Evil (1958) opened with an impressive, continuous tracking shot. Stanley Kubrick’s The Shining (1980) was one of the first movies to use the steadi-cam and did so in a frightening way as it followed Danny Torrance on his big wheel throughout the Overlook Hotel. Martin Scorsese, in Goodfellas (1990), employed the continuous tracking shot to great effect as well. Perhaps the most remarkable example of a no-cut movie was Aleksandr Sukurov’s Russian Ark (2002), which ran for 99 minutes and used about 2000 actors to take its viewers through a tour of Russian history. 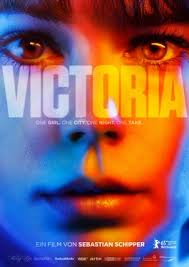 This brings us to the present –2015—and the just-released film Victoria, which follows the namesake of the movie as she encounters a group of young men in Berlin who befriend her and then include her in a plot to rob a bank. The movie is almost 135 minutes and not once does the camera cut as it winds through nightclubs, city streets, apartments, hotels, cafes, underground garages and more. Many will praise this feat but others will surely note this is nothing more than ‘stunt’ filmmaking. Like Richard Linklater’s Boyhood (2014), a movie that tracks the growth of a boy from ages 6 to 18, Victoria is more stunt than story. It’s style over substance. Form over content.

One can always make the case that we go to the movies for a visual experience, but you can also drop acid or watch a sunset to get a similar effect. What makes a movie great is the blend of cinematography and story, and, as with Boyhood, Victoria comes up short in the story department, as its narrative and characters fail to convince or fully engage the viewer.

Victoria is far from an amateur effort. The performances and the production are both skillful and professional, and it mainly works as a narrative in the same way Killing Zoe (1993) did. However, since the events of the movie are compressed it is hard to believe Victoria would really go along with guys she just met on a bank robbery. The stunt overwhelms and weakens plot and story. It also forces the movie to go on for much longer than it should. There are two, perhaps, 5-10 minute segments where sound goes fuzzy and music is overlaid as the characters wander and dance. I’m not sure if this is because sound failed in the actual production or it was just too dreary to watch the characters stumbling about. Whatever the reason, eerie music is piped over the action in an attempt to ameliorate the tedium. If those segments were cut, along with the build up to the decision to commit robbery, Victoria may have succeeded more. But it takes about an hour for anything of significance to happen, and the first half feels more like another Linklater movie, Before Sunrise (1995). In that film, a man and a woman meet and wander Vienna getting to know each other and waxing rhapsodic on a number of topics and themes. In Victoria, the leads, Victoria and Sonne, meet and banter but not much about anything. Then the action starts and it becomes more thriller than introspective drama.

It might have benefitted the film to depart from the tracking shot and take time to explore the characters more. Indeed, the most effective moment is when we see Victoria playing a piano and learn she was rejected from a prestigious conservatory program. As it is, she’s a Spaniard living in Berlin and working at a café. Could this failure and lack of faith in the world be the reason she would participate in a bank robbery with four strangers? It’s unclear because the rest of the time she seems to be a happy-go-lucky type content to party, drink, and smoke. And Sonne, Victoria’s romantic interest, has no moments like this. He is merely presented as a quasi-hooligan with some sketchy friends who is also swept up in the bank robbery scheme. Only Boxer, one of the secondary characters in the gang, has any depth, as he is the one who owes a favor to a criminal heavy—which turns out to be the bank robbery.

In short, Victoria wants it both ways: it wants to earn credit for its cinematic achievement (which it should), but at the same time it wants us to take seriously the characters and the story, which, at least for me, was hard to do.

Furthermore, the tracking shot was not used as a visual metaphor. Its employment as a device said nothing about the characters, their world, or any themes the movie might have been trying to convey. In Goodfellas, the famous tracking shot was a clear metaphor for mob life. It’s employed on Karen Hill’s first date with Henry, and she doesn’t really know what he does. The tracking shot takes them from street level, down into a basement, through a series of turns and passageways and then up into the lively nightclub where they are given the best seats in the house. It’s a fun shot, but it’s also a metaphor for what being married to a gangster is and will be. It’s alluring, seedy, mysterious, winding, and ultimately a false high. Victoria’s tracking shot doesn’t impart much of anything except that someone thought it would be cool to do this.

There is much to applaud about Victoria, but it doesn’t stick with you and might end up being more of  an Editing 101 highlight than a compelling movie experience.