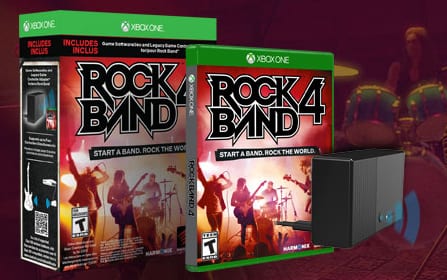 After months of information on Rock Band 4 tracks, bundles, and new features, fans today now know how their old set of instruments will work on their current consoles. For Xbox One owners, Harmonix is releasing a bundle that comes with a Legacy Game Controller Adapter that lets you hook up your Xbox 360 Rock Band wireless guitars and drums. This adapter supports four wireless controllers as well as many third party instruments for Xbox 360.

PlayStation 4 owners, on the other hand, don’t have to worry about any adapters as the game supports most legacy Rock Band and third party wireless guitars and drums on its own.

Additionally, a few more tracks were announced today, including:

Fans can now pre-order both the Xbox One bundle for $79.99 and the standalone game for PlayStation 4 for $59.99. Rock Band 4 releases on October 6 for both consoles.