Able to transmit video and audio data wirelessly, the Nyrius Aries Home+ Wireless HDMI 2 Input Transmitter and Receiver is essentially a substitute for an HDMI cable and a pair of devices that let you enjoy your favorite shows or video games in different rooms. This means you can hook up your television to your cable box in your bedroom, and then wirelessly transmit the broadcast to your living room projector, both eliminating the need to loop an obtrusive cable around your house and freeing you from having to do much other than flip a switch. Sounds like a dream, doesn’t it? It is, and while it may not be everything it promises to be, you definitely get a great HD transmitter that does its job and does it well.

Out of the box, you get a digital wireless HD transmitter which comes complete with its own stand and stays rather inconspicuous among your other devices. The transmitter comes with ports for HDMI input, two HDMI output sources, and for the IR remote extender. The extender, which is entirely optional, lets you hook use your device’s remote controller by sending the signal wirelessly to the television or console in the room where it’s located. As you’d expect, without this extender you won’t be able to do anything to the TV you’re streaming from unless you’re close enough to reach it.

The HD transmitter sends your television or console’s signal to the HD receiver, which plugs into the other television you want to stream to. This small plastic box features an HDMI output slot, a power and source button, and a status light that tells you when it’s off or in stand-by mode.

In addition to these main components, you also get an AC adapter for both transmitter and receiver, a 5-foot long HDMI cable, some screws and pieces to mount your device with, and a remote controller that lets you switch inputs and power off your Home+ devices.

Setting everything up couldn’t be any simpler and it took us less than 10 minutes to get everything up and running. Simply connect the Transmitter to your video source and plug your HDMI receiver into the television or monitor you want to broadcast to. Then all you have to do is pair up your device and you’re good to go. A quick start guide also comes with everything, but it doesn’t go into much detail as to what to do in case you run into issues pairing up your devices. It’s a little inconvenient, but you’ll have to go to the Aries website and download an instruction manual for more detailed instructions.

Aries advertises its Home+ as being able to broadcast up to 100 feet away, but this number is far from accurate. We had issues receiving any signal at over 30 feet away, so 100 feet seems like wishful thinking. What the number on the box doesn’t take into consideration is the number of walls that may stand between your two devices and other outside signals that can interfere with your broadcast. If you’re hoping for anything over 30 feet—and 40 feet if you’re lucky— you probably need to make sure you have plenty of free space between both transmitter and receiver.

Zero lag is also a promise, and fulfilling it depends on what you’re using your device for. If you’re using it to watch television and movies, you won’t have any issue with the crisp quality that’s streamed to your second device. The image and sound, consistent and natural, never faltered and it was as if we were watching television directly from the source instead of wirelessly a few rooms over. Changing channels or using your remote for anything else doesn’t produce any noticeable lag either, so it’s great to know enjoying your favorite show on multiple displays is painless as it is easy. 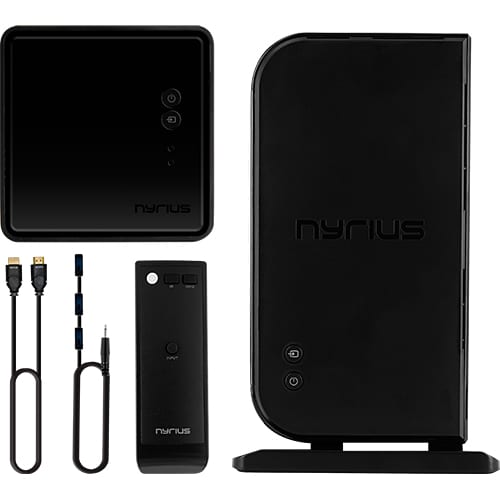 Gaming, on the other hand, is a bit more precarious than watching a movie as input lag is always an issue even when using a wireless gaming controller. It just so happens that your wireless controller also gives the Home+ some issues as the IR extender can’t be used to increase its range as it uses a different frequency. This can definitely put a dent in your plans, but, as we tested, the Aries doesn’t work more than 30 feet away from a device, which is well within the range of a PlayStation 4 or an Xbox One controller. This means you can still play games from your console even if you’re in another room. Wired controllers are another issue, however, as there’s really no way you can play from afar without the hassle of dragging the cord to another room. And the whole point of using the Home+ is to avoid dealing with this in the first place.

To test the actual lag when playing a game, we decided to transmit a PS 4 from our living room to our bedroom and play some Mortal Kombat X matches and see how it fared. We also used two wireless PS4 controllers that were still in range of the PS4 so the real test was to see if the Home+ would stream the game with little to no noticeable lag. All games ideally require a fluid connection, but fighting games in particular depend on a smooth experience to ensure your punches, kicks, or blocks come out as soon as you press their buttons.

While the image and sound looked like they were directly connected to the console, we did notice some slight lag when as we played. Our attacks were coming out a few half-seconds after we pressed their buttons. Because both of us were playing a local match, we adapted to this lag, and within minutes we were able to enjoy the game. Still, it definitely felt different than playing it with an HDMI cable. Taking the match online felt even laggier our opponents weren’t using a Home+, so we were the only ones who had to adapt to the speed. Plus, online matches, whether wired or wireless, are bound to have a slight delay, so it doesn’t help that the Home+ inevitably comes with its own share of lag as well.

As we saw, the Home+ is a great tool for anyone who wants to stream to multiple televisions in areas where a simple cable just won’t do. Say you have your cable box in your living room but don’t want to pay for an additional one in your bedroom. If you’re not going to use both televisions at the same time, you can get a Home+ instead and let it pay for itself over a few months. It also eliminates the need to loop wires, create holes for cables to go through, and any unnecessary prep work just to get your television, cable box, or game console connected. As great as it is for television and movies, the Home+ doesn’t fully deliver when it comes to gaming. Unless you’re simply streaming footage from your PC or game console to a big television for your friends to watch, the Aries will give you latency issues. They’re not game-breaking by any means, but you will definitely notice a difference if you decide to play a game that requires precise and quick inputs.

On its own, the Home+ is a great tool for anyone that wants to broadcast to multiple devices without being bothered by wires or cables. You may not get a perfect gaming experience, but you will definitely enjoy the screen and sound quality this small yet powerful device offers. We definitely recommend you give it a try.

Nyrius Aries Home+ review
Look no further if you want to stream your favorite shows to multiple devices in your home.
Quality
Design
Ease of Use
Value
Things that worked
Things that didn't work
2015-07-17
4.5Overall Score
Reader Rating: (0 Votes)